With the 2nd Telluria/Vela rebalance in deliberation, I can’t be the only one who is considering changing their defense lineup. On top of that, I’m starting to get bored of using Telluria and Vela. lol

If you were forced to remove Telluria and Vela from your defense team, what would your team look like?

I’ll most likely try playing less and then quit.

I was just thinking about the same thing: what would I do if Telluria and Vela got nerfed

. This could be useful in war (I’m in a small casual alliance that emphasizes enduring multiples attacks): BK, Ariel, C.Kadilen, and Morgan could have some potential in surviving waves of attacks; Ariel boosts mana while C.Kadilen and Morgan are Sorcerers with Delay talent.

I’m for once pretty excited to try this alternative out, since seeing the same ol’ faces of Telluria and Vela (on both my and the enemy’s sides) is getting tiring.

I definitely hear ya! I felt the same way when they got nerfed the 1st time.

Sad to hear that. People will just trade Vela for another blue and this BS will be there again.

Very nice!! Black Knight is an awesome tank, I like the synergy you got going on with your alternative team!

Have Vela. No Telluria. My current setup:

Problem is my other blue fully ascended heroes are Miki and Magni, so I’ll fall back to Magni most likely (though Miki is +18 so he could work). My other options are Isarnia, Richard and Thorne but don’t feel like ascending any of them, especially since Raresight Telescopes are the rarest kind of material for me (for record, I have 4 or more 5* fully ascended for any other color, and some of those telescopes for three were bought).

Or I’ll stop caring, pull Ursena to max once I have the tabards and will go mono-purple (not for wars though):

I would go Finley, Vivica, Santa, Clarissa, Poseidon. All are +20 by the way.

I have to agree with you. And my thoughts over the last couple of days have been the same.
I now only pay for VIP and POV.
I have left a competitive alliance to join a family alliance set up by my grandson consisting of only 7 members, two of which don’t even have 6 war teams lol.

Imho, even nerfing Telly to reduce her AOE skill damage is not much of a nerf. Telly will still remain supreme. As for Vela, I still don’t think the nerf is a true nerf at all as I see a buff instead. I do have GTV maxed and emblemed but i do not use them as is in my regular and war defense. I am the only one flanking my Telly with Snow White and i dont see that changed anytime soon

Alfrike, Ursena flanked by whatever holy and Vela, but I think Telly will stay best even after the 2nd nerf. 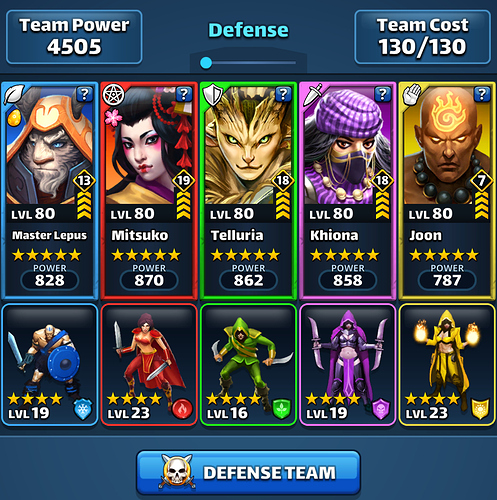 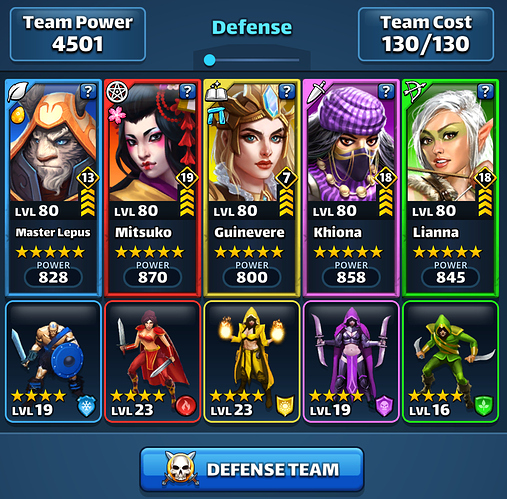 Vela sits at +7 so hasn’t been on defense for a while, I like Lepus better on offense

This is my current defense: 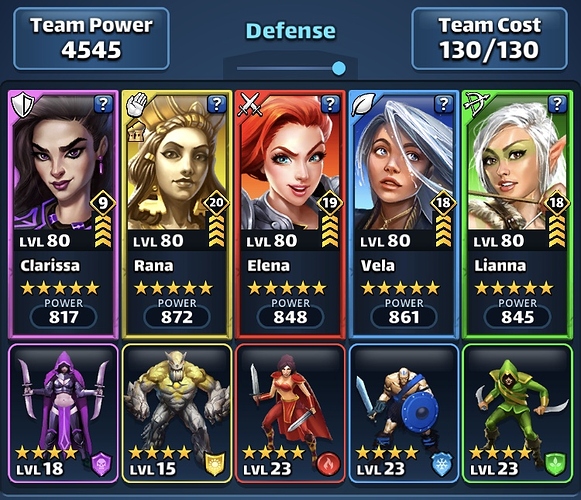 This might be my alternative raid defense if they nerf Vela too much. I’m kind of sad if I have to change my defense. My all girl defense currently doing great for me. 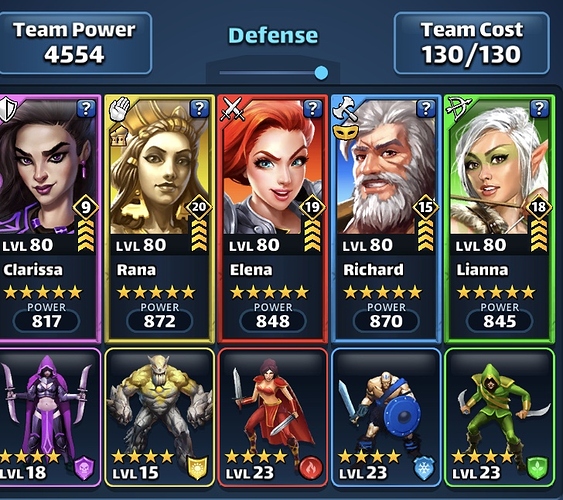 Just to avoid duplicate threads, I’m closing this. See below for further conversation.

Which hero do you think would take vela’s place once sg nerf her? I dont believe that nerfing Vela again would bring any diversity to the meta . Ofc you wont see vela again because she being useless but someone else would come and take her place. Who would be this hero? Master Lepus Costume Magni Finley A new blue HOTM that will bring to sg more profit Other I dont know how to make a poll if someone can edit it and make a poll @Polentinha