Not sure if this is working as intended or a bug
I was setting my defense team for the next tournament and was switching between normal Carver and his costume version to compare stats. Then something interesting happened. 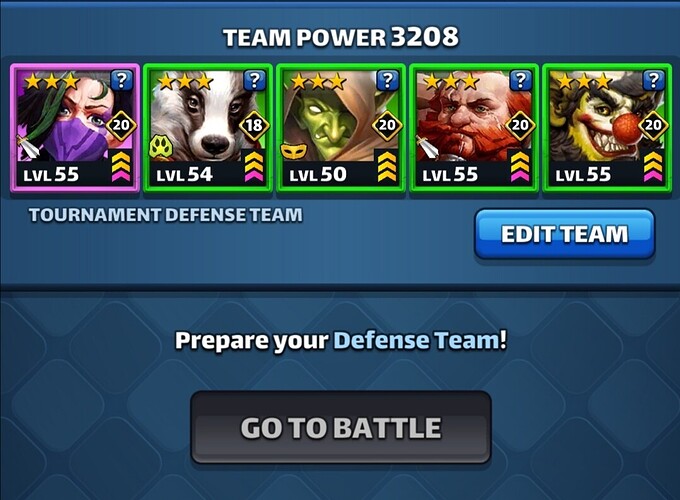 When you try to edit the tournament defense team again, you’ll get this. The only way to switch now is to remove CB Carver and replace with cCarver (even though there’s only one copy and they are the same hero)

Anyone else seen this before? Or has this always been there?

and that there isn’t anything in the recent release notes, I’m guessing it might be a bug.

Having said that, I kinda welcome it as a nice bug :p. I think it’s the well-needed change as mentioned in the link. It helps that we could set which costumes we want in tournaments without having it affecting our daily usage of the hero (for eg. emblem quests/challenge events etc.)

Yeah. Whenever I use cWu Kong in tournaments, I have to keep reminding myself to switch after using the CB version for titans.

And in a recent war, I was stuck with a CB Vivica instead of cVivica because I used the non costume version in Underwild

But is it a bug or you mixing up the two heroes?

You later use C. Carver on the map, but it was likely the original C.Carver. Did you not also still have a CB Carver on your bench?

No. It’s just one hero. If you Equip the costume version using the ? from the tournament screen, it stays that way in the roster but not in the tournament.

Ok, I stand corrected. I just tried this with my Dawa. I put her on tournament team and changed to uncostumed with the ? button. When I went into the hero roster she was still costumed.

And I apologize, I thought you had two different heroes you were switching back and forth with ‘Edit Team’.

Double-check which version shows up as ‘Equipped’ through the ‘?’ button on your team.

you’ve got a point too @nevarmaor . Without clicking into ‘Edit team’ and equipping the costume solely from ‘?’ in the tournament defense page, the costume doesn’t change even though it shows the costume being equipped

(after reading Liam’s post again and again - I realised this was what Liam is pointing out - sorry for being repetitive!)

the ‘equip’ description still says that it affects all teams in the roster, so maybe unfortunately

it could be a visual bug.

Yeah, and there’s no way of testing it unless someone you know attacks your defense during the tournament.

The raid defense screen doesn’t show the same behaviour. The costume is always changed even when using the ?

@Petri can you have this looked into?

There seems to be something wrong in the coordination of heroes between roster and raid tournament teams where costumes are concerned.

There have been several “feature request” threads about similar things, for example my own: Allow player to freely choose hero costume separately for each team

I think that this issues is one of the most annoying ones in E&P. Especially tournament and war defenses “not sticking” before being locked down at start. But also, e.g., normal raid defense changing, playing class challenges changing everything where the hero used was, etc. And also the in-ability to just create multiple team “presets” for different uses, each using either vanilla or costumed version.

But still, what is immensely more important, is that tournament and war defenses do not change once set. (I do not think they change after the tournament / war actually starts. If they do, then that is rare bug?)

EDIT: Sorry I read the above posts maybe too quickly. If there are also differences in behavior depending on where the costume is changed, then those are also probably bugs. Or if there are issues with “right copy” of duplicate heroes sticking in the defense…

It’s a bit confusing to describe using only words so I’ve attached a video.

Basically, currently known/expected behavior of costumed heroes in tournaments is

However, there seems to be a specific way of changing costume without affecting the Tournament Defense Team during Preparation Phase

In the video, I have set cCarver as the tank of my Tournament Defense Team

There are 3 possibilities here

Thank you for the report! We’ll investigate this issue here.