Dude, I know you’re angry at the game but maybe if you didn’t start insulting people out of nowhere you wont get flagged?

Maybe it’s cuz I’m new here and I don’t see things as a mod but yes, I do agree listening to complaints gets old fast. Listening to disrespectful people everyday can be pretty tiring, talking from experience. But then again it’s not the job of regular players to confront angry customers everyday, in every thread.

It’s the view of most Regulars on the forum. It’s one of the single biggest complaints of the long-time forum members, that they have to wade through the angry posts by people who:

That’s not what we enjoy reading, and not why we’re here. And the vitriol with which it’s often expressed burns up the stock of natural empathy that most of us have.

About the football analogy it should be like: complaining about buying a ticket to watch a game, expecting to see some pros like Messi playing in the game (1.3% probability of a C. Ronaldo), but all you get is watch a bunch of amateurs kicking balls.

My point is that the things people are angry about have been part of the game from the beginning, and are expected features of playing for all of us–much like noise at a football stadium, or the game times, or the ticket prices.

If you go to a place where fans of a game congregate and start complaining about well-understood aspects of the experience, the fans are going to mostly react pretty negatively.

I think I said it before but the forums are not just for fans of the game, or are they? People get redirected here when there’s a bug or they want to make a complaint.

So yeah, maybe we found the culprit here. It was SG all along

For a 22 pool of legendaries if you had 100% to get one the probability of getting the same hero two times in the row is about 0.02%

Yet there is 26.5% to get a legendary, so to get the same legendary hero 3 times in a row lets say is more difficult than getting the hotm

I am sorry but people here select what they read. No one “has” to read this thread. its just one click to move somewhere else.

Here’s what SG has to say about the forum:

This forum aims to encourage vibrant discussion amongst players of Empires & Puzzles. The forum is intended to be a fun and safe platform to interact with other players across the globe - of all backgrounds and beliefs.

Remember that you are responsible for how you express yourself. We ask that everybody keeps the conversation constructive and civilised.

So, no, it’s certainly not just for fans. But it is where fans of the game congregate. It’s hard to imagine that many people who aren’t fans of the game would want to hang around here much, although there appear to be a few contrarians who enjoy showing up and throwing rocks from time to time. I’d argue that they’re probably still fans of the game, though, since they apparently keep playing it…

With respect to getting directed here, there are four buttons on the in-game menu: 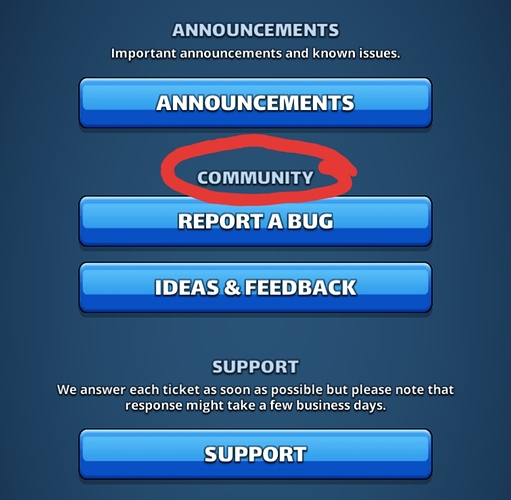 Two of them are under the “Community” heading: “Report a Bug,” and “Ideas and Feedback.” Those come to the forum.

So yeah, maybe we found the culprit here. It was SG all along

Yup. We have talked about having an explicit “Feedback For SG” section that was directed just at the devs, and that everyone else could ignore.

Even better would be a “Feedback” button that just goes directly to a web form for SG.

Great idea, a feedback/complaints section would be nice. Devs are the ones who should be dealing with these problems, not us normal folks

For a 22 pool of legendaries if you had 100% to get one the probability of getting the same hero two times in the row is about 0.02%

Your math is way, way off.

If there were a 100% chance of getting a Legendary on every draw, then:.

Now, you say a 26.5% chance of getting a Legendary, so you must be talking about the Epic hero gate.

Yet there is 26.5% to get a legendary, so to get the same legendary hero 3 times in a row lets say is more difficult than getting the hotm

The chance of getting at least 3 Legendaries in 10 draws is 1 minus the probability of getting only 0, 1 or 2 Legendaries. That is:

So you’ll get 3 or more legendaries more than half the time in a 10-pull.

That hardly seems astronomically low. And there are a lot of 10-pulls done by the 1.5M daily active players.

Devs are the ones who should be dealing with these problems

Really? It’s a game.
Anybody forced you to play it.

You’re talking of it, as if it were taxes by law.

And why should a dev respond to complaints of someone, who is disappointed from his game and plays nevertheless?

You won’t vent, if you wouldn’t like the game, you would quit instead.

But feel free to let of some steam here. It’ll definitely help you to calm down, rethink and enjoy it again.

If only your raids were this successful, right?

I never said don’t vent. I said the people you’re venting in front of are tired of hearing it. Feel free to vent–just as others who are tired of that kind of venting will feel free to respond as they wish too.

No offense to you my friend but if you read my previous posts you’d have noticed I’m not the one who started the complaint.

And yes, of course devs should hire people to manage these complaints. It’s their business afterall, isn’t it? Why should I, or should I say we, be dealing with angry tanthrums of angry customers. We’re not the ones who get paid, are we? We’re just regular folks who enjoy the game so no need to be defensive when the game gets criticized bro.

Ahhh so you’re the real culprit

Word. If it makes you feel any better, I’m 0 for 362 for featured heroes over the last two Atlantises. RNG can be a serious #$%$&^ sometimes.

Thanks for nothing. A waste of time and money. 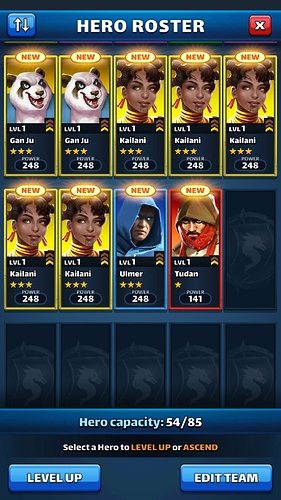 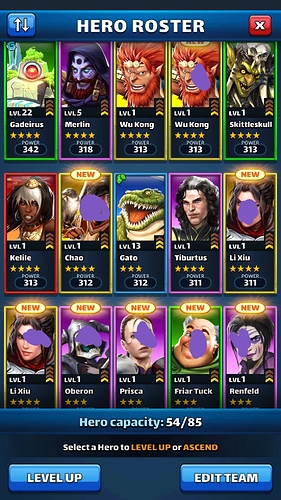 I don’t, but i understand people that do. As anchor said there is no end-game hence getting heroes is the only target for many people.
I enjoy the game and mostly the war part, alliance is the support group for me

., but it is irritating seeing people that are more lucky to say to the others “dont complain”. A game’s forum is as much about expressing your rage as singing a song for heroes. Of course name calling etc. should not be acceptable, in any way and you have tools to deal with that (bans).

No, that is just one aspect of many in the game. Are those who choose to do that then entitled to something special? There are many players who choose not to.

It is possible to summon hundreds of powerful heroes without spending a dime. Where does it even mention HOTM’s in that linked description?