The event summons, elemental summons and summons in general in this game are absolutely ridiculous. The devs of this game couldn’t care less about the people actually spending money on this game and paying their salaries. They have driven many many players away and have many more that have stopped spending because of their ridiculous greed and ridiculous summons. I spent $300.00 on this Atlantis summons with over 120 pulls, I had some hero tokens as well that I used, and got garbage 4*, garbage 3*, my 2nd absolutely useless Obakan ( he has got to be the sorriest 5* in the game) and my 3rd Vivica. In the past I have spent considerable money and gotten absolutely no 5*. With the results of previous summons and this last screwing I just took I will not be spending another penny on this game and will no longer support the greed of the devs of this game. People post often how they use one hero token and not only get an awesome legendary hero but also the HOTM, yet someone who regularly spends considerable amounts of money on this game such as I do gets screwed coming and going continually. Seriously $300.00 with over 120 pulls most definitely warrants the HOTM, but not in the eyes of these greedy devs. I urge everyone reading this who spends money on this game to stop spending until the devs get a clue and start giving us real value for the money we spend. After all the reason we spend is to get the better heroes and become stronger and when we continually get cheated like this why spend. Two months in a row I spent considerable amounts of money going after the HOTM and got nothing but garbage. Last month was over 100 pulls with ZERO legendary heroes. Again I will not spend one penny more on this ridiculous summons system and urge everyone to follow suit to force these greedy devs to make the summons system more fair to those of us who actually pay their salaries.

160 Likes
Unfair/Unattainable 5* Heroes
"Free summons"
Small giant screwing the paying peeps
Hero summons
Buying gems for heroes
:broken_heart: I HATE / LOVE this game! – A Guide to Complaining, Celebrating, and Overcoming Obstacles
Spending gems
Rewards & Summons
What a joke! No its not
Hero summoning
I don't know but it's a lot
Worst 10-Pull Ever?!
Question for all
Nothing nice on Christman and Fables of Grimforest summons
76 summons not a single 5*
The drop rate on Christmas heros needs to be increased
Recalibrate Titan Rewards using War Points and other tips
The probability of drawing or bug?
Event hero chances are atrocious...cmon SG make some changes
Guys does the odds of troops and tc decrease recently?
10 Pull and 4xFrosty
Support loyalty
Troop Summons are TOTALLY out of whack
4* materials
Trying to decide if I want to keep playing
Why always same heros come in?
Unfair treatment of players of this game
Did I only notice it?
Don't mess with small giant 😃
Legends summons with past heros of the month
Is the distribution of 5 * hero calls and 4 * materials fair?
Is the distribution of 5 * hero calls and 4 * materials fair?
Stones' colour distribution is NOT random - MASTER Board Conspiracy
Convocação
[MASTER] Remove/ Get Rid of Season 1 (S1 / Vanilla) heroes from {X} summons portal
Please Read this before posting a bug
Not see an heroes 4 or 5*
Forum Edition: Count to 15 before a mod posts!
Don't waste your time on legend! - Tavern Of Legends Vent Thread (Odds, Summons etc...)
Is there a limit on 5* heros?
Fix your drop rate so we have an incentive to pull heroes
I strongly dislike merged topics
Disappoint investigation
Increase drop rates on five stars
[Collection] Ridiculous Thread for Ridiculous Threads
Why spend I say this time and time again
Mudanças nas convocaçoes
Summon heroes
Manipulation of game by game creators
Night of Avalon
Valhalla Summon -- What A Joke
Atlantis summon is crap
Hello ... I'm tired of buying and did not get what I want so I will not risk again and I will not pay one dollar anymore
This game is a joke
Are the summons based on your purchase behaviour? Is SG fair?
Wad January 25, 2019, 1:58am #2

Thank you for confirming my choice to stay cheap to play, you are very unlucky.

I recommend not to spend so much Money on gacha.

What exactly is a Gacha? (Read before posting things about "unfair pulls") General Discussion

So, the post below was written for the FEH Reddit by user GarlyleWilds when the game was released, and I really believe people here should read. Even though I’m a new player here, I’m an experienced Gacha Player, and I believe most people here, even if they have played for a long time, still don’t understand exactly what a Gacha is, and how it affect pulls. I’ll edit some parts of it to make it fit our game. Hey there, I figured I’d post this up. Before anyone thinks this is “hey don’t spend”……

Do you buy lottery tickets BFD ??? Because that’s what your doing here basically, your spending money on a chance, not a guarentee of getting something…As long as you keep that in mind, that your not “buying” heros then you’ll enjoy it so much more…It’s like going to Vegas and playing the slots, sure your disappointed if you don’t hit the jackpot, but you were never guarenteed to either

honestly a while ago I was also very upset that the system is like it is. I mean I’m just a C2P player, but I felt a little betrayed after spending money and not getting anything.

but now I actually prefer it the way it is. like Rey008 said, it’s a gamble. otherwise everyone would just buy all 5* Heroes without even working towards it and earning it.

imo it’s better the way it is, even though I am also a one unlucky bastard

This game has not failed in what it says it would do, the odds of each summons are clearly laid out on each summon page, pressing the question mark, will expand menu to show the odds.

Now, I do not think devs or the company have issues here, be it that the company is set up to make money, yet they ain’t forcing anyone to spend, they simply laid out a gambling machine such that you will find in any casino, it is has always been the choice of the spender, sometimes you win and a lot of the time you lose, it all depends on luck or say chance.

Last Atlantis, I did 10 pulls and it didn’t bring any hero I didn’t have, so I stopped. This time I have done 30 pulls looking for just 1 hero Kageburado, and I did made up my mind that all other 29 heroes would be fodders, I didn’t get Kage but got Delilah and Inari, those are what my luck could give.

There is simply no reason to suck or get mad, you can always try again next time. Summon in this game is based on chance the sooner anyone realize that the easier to handle.

I will not be spending another penny on this game

That make two of us then.
Sadly I’ve learned the hard way summons are not what we would like, or hope. This was my last paid summon.

Ever checked the odds? If so you would never expect to get them with a 10x summon. The odds do not stack. So it is still luck.
It took me about 10 month to get my first 5* not to speak of a HOTM. 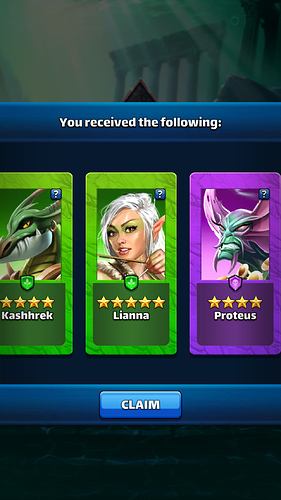 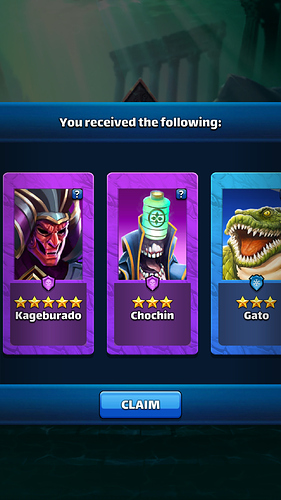 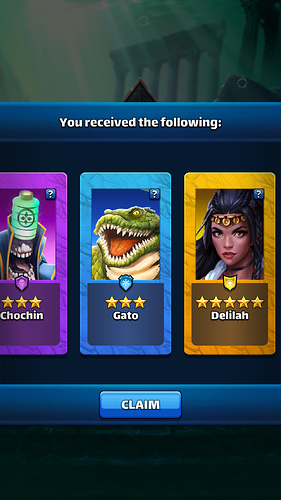 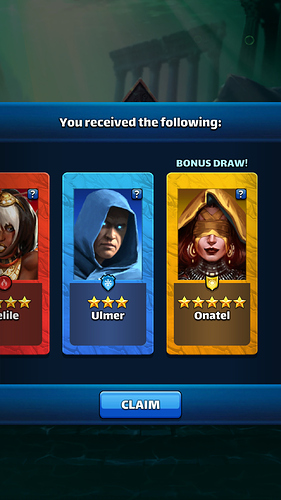 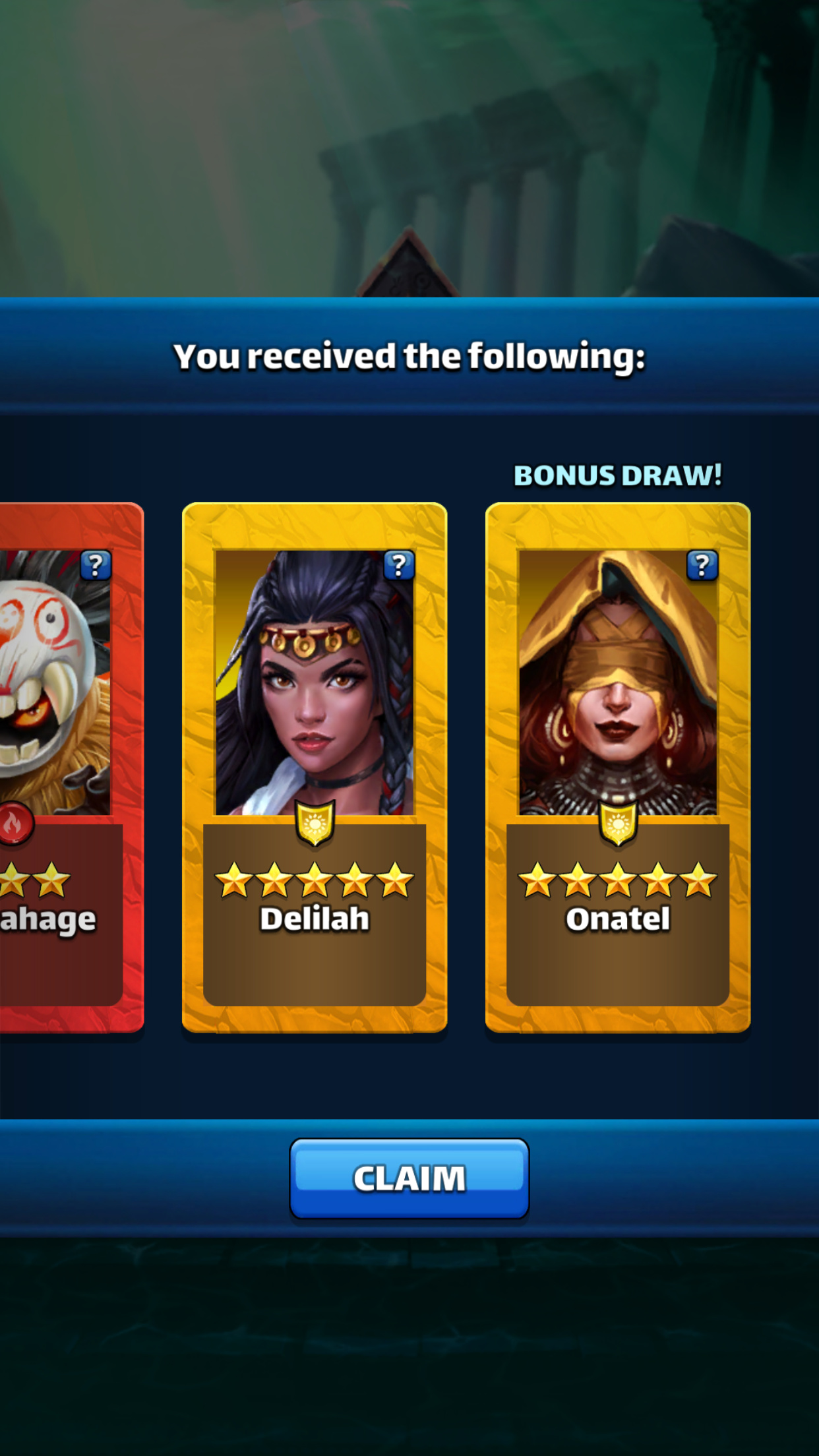 only 100 coins from Atlantis 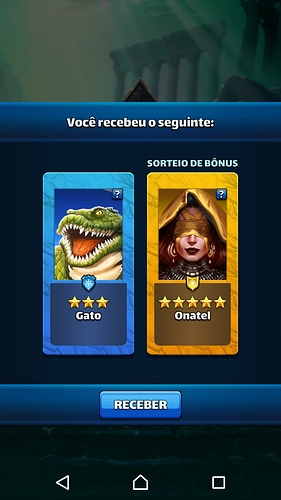 They need to change the system … 8000 gems for a 30 pull is like $80. Getting 0 5* for that is total garbage. At that price point they should have it that you are guaranteed 1 5* with a possibility of more. Guaranteeing just 1 5* would still take a lot to get every one of them. Or if that’s not lucrative how about a bar that you fill up by summoning and gives you a 5* at like 50. I’ve spent around $500 and the only 5* I have are Kagan and Mitsuko. I’ve been ripped off, this is garbage and not fun at all with nothing to show for what I’ve invested. It would still take a considerable amount to get all heroes. There’s nothing wrong with making them more available to the player base.

I hear you! Last month I did a 30 pull on Atlantis and got 3 kageburados, 1 musashi, and 1 evelyn hotm and a bunch of nice 4*'s. I thought it was a ridiculous summon!

I agree a member from my alliance has spent a lot of money for a year and a half and only has 2 five stars it’s really not fair. But it’s not the devs fault is ours for continuing to spend money.

Well, thank you for letting us know.

If spending money aint lead players to top100 then its another ridiculous conspiracy here, that CP & 7DD and their co-allies players are all working for SGG so that they have all 5☆ in the game!
Omg why I have never thought about that before?

There have been many suggested changes. Merely improving the odds does not eliminate the risk of doing 30, 60, 90, whatever summons without getting a good hero.

My suggestion for an improvement is here: Something a little more certain for your spend - shards? - #37 by Kerridoc. The new emblem system is along these lines—small, frequent and random drops that reward grinding.

Any change is a tricky balance. If you make it more certain that spending a lot wins a good hero, then it seems likely that there will also be reduced odds of getting the hero on a limited budget. People who spend a lot should have more goodies, but not all the goodies. This issue has also been discussed at length and shouldn’t be rehashed here. See, e.g. RNG Taken Too Far!

I’ve spent around 150 over the last year and have 2 5 stars and 110 hero slots.My 2 5 stars are 70 currently.The bigger problem here is materials Imo.I think knowing we’re all gonna spend a little bit of coin if u think for 1 second that u will find yourself in the top 100 your foolishness is as bad as your luck.get your recruits up training camp to 20 and pull them for free.I really wish I new about the some of these little things 8 months ago I could have been running 5 star legendary pulls day and night and most likely I would be sitting on a lot more.

This issue has also been discussed at length and shouldn’t be rehashed here. See, e.g. RNG Taken Too Far!

That sounds like an argument for closing or merging the thread. Because if we aren’t going to talk about the balance issue here (which is what contextualizes the OP’s concern), that leaves us with “weather” and “sports”.

I feel you, but I like the comparison to lottery. I spent around 25 euros a month and play for 4 month now. I stopped spending, cause it will take months to level the heroes i have. I don’t wanna teach you, but it’s also greed wanting to have every hero. I recommend staying with what you have and enjoy leveling and getting stronger, if you pay that amount of money, you will never be happy. And by the way, I always have to laugh when people either declare the 7dds to their godlike heroes, or are angry with them in ways of conspiracy against casual players. Stay cool, love playing and make a trip to Vegas with your money