Struggling to level up 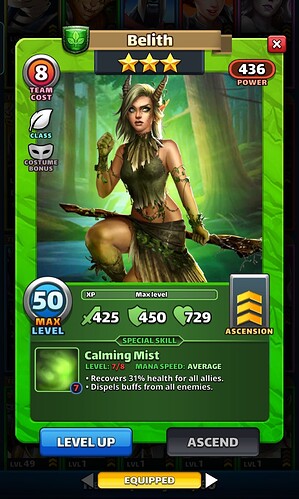 After maxing out this card which I would like to keep as 3star I have sunken in to it like 30cards on top after it reached level 50 but it will not go full. Its not the first time that this happened to me but this time I feel like if it will not work after I will sunk 10more cards in to it I will just get rid of it! :D Any thoughts why game keep doing this to me that I start to be afraid every time cards gets close to max out instead of being happy? Is this a bug or some twisted game logic where 100% doesnt mean 100% ?

Oks I hope someone can say something on this a thing but if not by by card U go :D And please dont say that I should keep sinking cards into it but why game is designed like that

So, depending on what feeders you are using, just reach 100% total within 10 cards and you’ll get it

Edit : If you don’t have 10 roster spots free, then it’s probably best to use gems and expand it

one way to get around the roster space thing: using the silver summon tokens allows you to summon as many as you want, as long as you have one free roster slot. when I have a stubborn hero, I do this until I summon enough feeders to guarantee maxing the special skill.

Exactly You said I need keep sinking. But why game is so? 100% should always be 100% or Im wrong? I have deleted games for so much less nonsense than this but in this one I have set in lets just say nice money that folds (well not in this card ofc but in total). Lets just say I have my Princip's. So next time You go out and eat at restaurant and later when the bring a bill and You pay what would you say if after paying they would bring one more bill and say please pay again just for fun? :D And rooster spots I have enough as well other things its just Princip since the owners of this game earn enough from fools like me

which can`t hold there money in pocket

Can you show a screenshot where it says, level up chance 100% but it does not level up? That would be a bug, then… whenever I select enough heroes for level up and it shows 100%, it really levels up for me…

I believe he means that if you max the level of a hero, then the skill should be maxed as well. And we shouldn’t need to level it up separately

Thanks, I missed that completely

Cheers Bro! Finally someone got what I`m rambling all about.

Well after last night spending my cash on this game and leveling other things up and out now I need to get more heroes to sink in to this one. So Eventually I will get there but just I really hate this type of slot machine action in the end to max out hero and God forbid when it happens with costume as well and it does always. So it`s like gambling twice for one card. Except that I really like the game, for now!

yeah I get you, I don’t know why special skill level ups are so difficult by design… seems pointless, when anyway in the end they will be maxed

but when I first started playing this game, there was no guarantee that a maxed level hero could get maxed special skill, it was still like 2% chance per feeder

that was really annoying, and I was tempted to feed my 3*s away lol

after paying they would bring one more bill and say please pay again just for fun?

I’d say “Damn, I should read the terms and conditions that are printed on the menu first.”

As bad as the terms and conditions may be.

Yeeez, sounds that it was horrible at beginning and now I sound just like old door hinge winging about some slot machine action to get it max out. But I guess I got a bit pissed of yesterday after spending couple hundreds euros and all I pulled out was couple cards in repeat!

dang I was pissed of

I have ongoing though love with this game! But thanks for sharing your experience

but it will not go full

You have to keep feeding to level up the skill when this happens.

I will feed enough same color feeders to give a 100% level up.

It was horrible… wasted so many feeders and so much food in those early days haha!

but I agree it could still be better now

I maxed a 3* recently that was only ⅜ at level 50, found it annoying lol… fed it so many other 3* that I had saved up just to get it done with

But for that is price to pay. Double the bill at end of diner at restaurant. Eh, life

Well this chat calmed me down a bit that Im not exceptionally unlucky with this. Bro have U an address for creator of this game? :D Just a joke, but I hope U got my point of paying him a visit in middle of the night! :D Im willing to travel to share my love about how this game is going so far. I would love to watch him pull out 50 cards and 15 from the would be poppy`s

haha wish I did but maybe by now he lives in a big well-guarded mansion somewhere really hard to get!

Welcome to the club

I know its not funny but, yee. We need to make riot or sort of thing. All planet now is rioting for whatever! We can 2. Lets stop the highway and make demands

But must be ready for some tear gas a bit