Hmm, I do think then the OP is incomplete. We should make sure to also stop allowing 1* and 2* in tournaments. It’s not fair to Zuri to have to compete with Sharan.

Atrocious idea. Anyone who’s not a whale with swathes of 5* floating about will fall even further behind. This idea is doing SG’s greedy work for them.

I was A rated with this. I actually felt a little pang of guilt at the time as I imagine losing to it would feel a little humiliating. Given my time again I’d not do it as I can see it would be annoying. I’m not intentionally nasty…very often 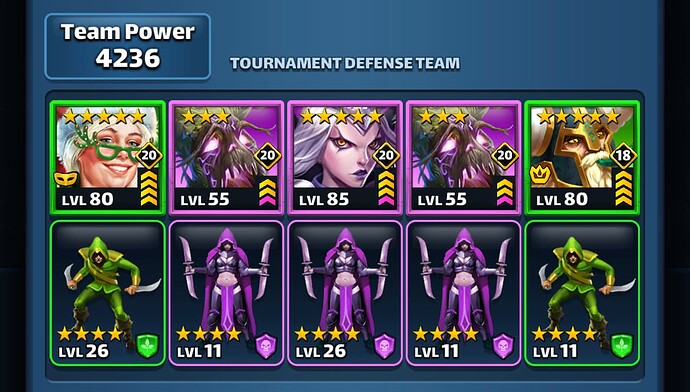 So what I think the real point of this is actually

“Treevil shouldn’t be allowed in the 5 Rush tournament”*

The Jade one is pretty spot on to be honest…this and the other ones? Different story!

Bored are you what a waste of of thread

SG source for ideas definitely not to do

I guess somebody hates it when Treevil wrecks their 5* team.

I totally agree and if people want to complain about relying on 4* heroes in a tournament meant for 5* heroes, then they should not take part same as if someone just started the game. It’s a class of heroes for a reason, nothing worse than going against a mono team of reds who use wilbur and wipe out 90%of your health with a single hit and the tournaments are the biggest pile of crap in e&p they should scrap it the loot is just not worth it unless you spent over £1000 on your team.

I guess it must be live with the shame of it all.

the tournaments are the biggest pile of crap in e&p they should scrap it the loot is just not worth it unless you spent over £1000 on your team.

You mean the loot gets better if you spend a lot of money? There is a level above top 1% that is only whispered about in shadows, if you can present your black amex card?

Are you referring to the Premium Members Club? Has it started yet ?

Lol… if this club actually existed, it would be so crowded by now.

I’m rolling out a Ferent tank and I have straight As for the first time in a long time. Hahaha

Thanks for sharing this! Super helpful. I placed top 10% in this tournament but got E on defense. Generally my defense team design s**s. So it’s really useful to see an accessible (to me anyway) defense team that’s successful.
Just in case you find it useful, here’s my main offense team for this tournament: 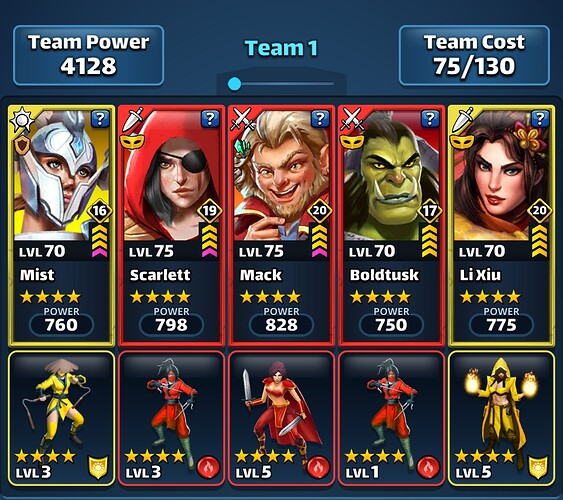 with variation for teams with yellow tanks / no purples: 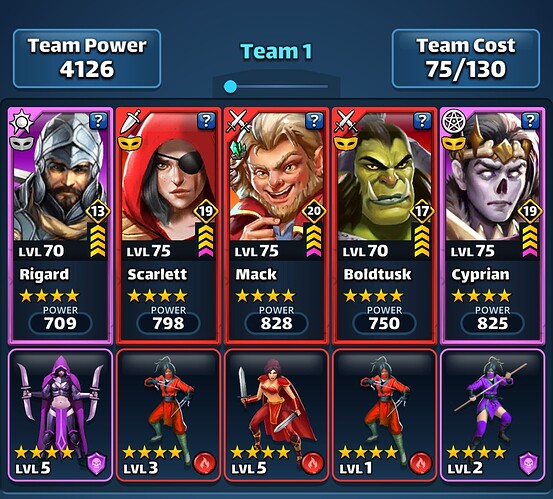 C Scarlett’s attack is 904 & there’s still a ways to go. I am going to save my $$ for the costume summon in future – given a certainly level of expenditure, one can guarantee eventually getting all the 4 costumes.

Ok this is completely off topic, but then the OP was absurd.

Also, there should be a troop level floor. For instance in a five star tourney you have to play with one star troops if your four star troops aren’t level 30. It would really help out game play.

My pleasure! And congratulations, top 10% with an E on defense is pretty good. My defense kept an A grade throughout and I managed to get into the top 1%. 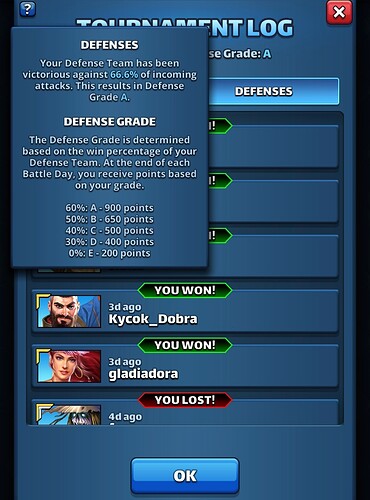 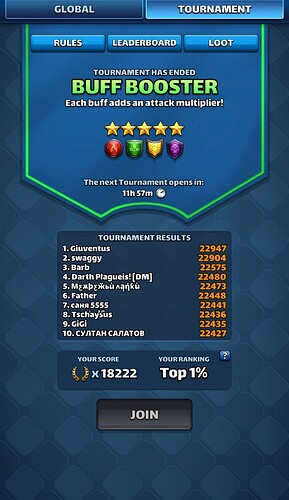 The idea was that if the front 3 all went off, my team would get 20 buffs, so with +400% attack, every slash attack would essentially be a snipe. Mist was there to prevent buffs and Seshat to dispel them. Of course, luck is heavily involved, the same defense can yield wildy different results.

Just in case you find it useful, here’s my main offense team for this tournament:

I don’t like it, but I tend to go mono on offense in 5* tournaments because my attack teams are significantly weaker than the defenses I’m facing. 3/2 is a great setup too though.
If it has buffs even better, but I don’t prioritize them, I just go with my best team. I’m lucky enough to have good synergy in several color. In yellow, Mist/c Leonidas/Faline is a guaranteed whole side dead if I get 9 tiles. In purple I go with Sergei/Tiburtus/Seshat or Malicna. In red c Boldtusk/Wilbur/c Colen/cb Elena/cb Scarlett. My green and blue teams are not worth mentioning, they’re terrible.

Little piece of advice: put your level 5 mana troops under Boldtusk and Cyprian. With the costume bonus they’ll charge in 9 tiles (3 matches) instead of 10. And in your 2nd team, switch Mack/Scarlett and Boldtusk/Cyprian. If Cyprian is on the wing, he gives riposte to 2 heroes intead of 3. That way, if you can charge Both Mack and Cyprian, your whole team has riposte and you get one more 20% attack buff.

The costume summon has been extremely generous to me. I saved keys for months waiting for Leonidas to be featured, and got him, Vivica, Elena and Alexandrine in 40 completely free pulls. The 5* are slowly starting to be outdated with all the new heroes they’ve released, but there are some gems in there. Not to mention that most 4* are awesome, and that it has the best odds in the game, so I’d say it’s still a great portal to pull from. Good luck with your summons!

If you lack 5* then a 4* limit broken and costumed hero is a fair alternative.

Also using lower * heros makes it interesting Guili and Boldtusk are pretty good in 5* battles with the right team mates.

Sorry this is an awful idea, imho.

Thank you! So helpful.

Just no . The argument is invalid. And serves no purpose whatsoever.

I mean, of course they might feel kind of awkward there, but maybe with some encouraging they would manage?

At least, the small ones, like Baby Baldur and Costume Yunan, they could fit in nicely?

Ah …an emphatic No!

You have an interesting sense of humour🤔.