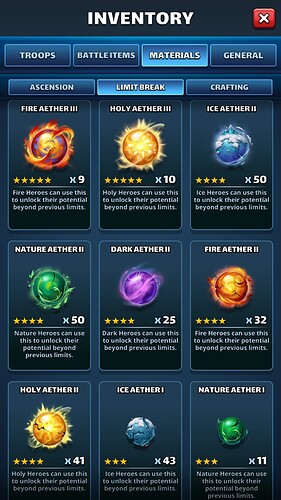 I have many usused 4* aether. It will be great if there is “Split & Merge Aether” function

Should there be “Split & Merge Aether” function ?

I was just thinking yesterday an aether exchange would be helpful.

Upping the three star aethers would be the other approach but I see that as less likely and a less creative idea.

It is weird that 4* are less exciting to get than 3*. The balance is all off.

Yep, the most wanted are 3* aethers. I think the balance was designed in a way that aethers are used only to LB 5* without costumes. If you LB costumes or lower tier heroes, then there are too many high level aethers and too few 3*.

Ooh, that´s a really great idea! Perhaps it will find its way into the Alchemy Lab at some point? Hoping for a less harsh price to transmute those than the last two tiers.

I could maybe get behind breaking bigger aethers into smaller, but don’t want to see the opposite.

I’d love it if it was iron/ham cost… But I’d imagine aethers would require gems to transmute.

How did you create a poll?

Thank you for the answer.

I like the idea, but I wonder if it would be simpler to just let us use a higher level aether in place of a lower one.

if it would be simpler to just let us use a higher level aether in place of a lower one.

No, that will make it more complicate.

It’s a nice idea, but not something that I can see them ever implement. The best way to look at aethers is basically additional ascension mats. In the same way you can’t split and merge excess orbs to be able make more darts or to make whatever is below orbs (if for some reason you are short of them)

Most likely something like “Put in 6 four-star aethers, pay 100 gems, after 2 weeks, one random 3* aether comes out.”

I do hope they give me the ability to split my mediums into smalls.

I am in desperate need of small aethers, while I have a tremendous surplus of mediums.

Any word on this coming true?

I doubt it… I’m just surprised they aren’t trying to sell 3* balls by the truck load.

Any word on this coming true?

@PlayForFun Is there any test of this in beta ?

I doubt it… I’m just surprised they aren’t trying to sell 3* balls by the truck load.

Had SG ever actually put any of these ideas and suggestions and requests into practice?