Welcome to the fourm. I do kinda think that sgg have calm down on the animations on special skills as if they take the whole screen up and you can’t see the screen when your facing titans etc…

Related But Separate Ideas Please visit these threads to discuss and vote on these separate ideas, to avoid them being jumbled together. Allow Continuing Attack During Titan Sp…

Some of my favourite animations are the recent ones for Garjammal and Akkarrog. I think it’s more some are good and some meh

My two favorites are relatively basic ones: Alasie and Greg. They are simple, but beautiful at the same time.

For me, I personally think that this game isn’t always about attacking, it’s also about art and beautiful view. This is the primary reason I installed this game 2 years ago among many games like E&P, I chose E&P because they have the most beautiful user experience. However, I do think they start losing their personality. At the end of the day, who am I to judge them. I’m nothing

how about Eichbelborg? that’s the best special animation for quite some time, imo.

My favorite animation are S1 4* because they have minimum delay.

Grimble galloping across the screen on his goat never fails to amuse.

You can discuss your favourite effects here:

Here’s a few of my favourite effects when those precious specials go off: Winners: I don’t have Aeron, but I love the smooth zoom-in of orbiting cogs to the extent that I’ll set him off on purpose and health gain be damned Gravemakers’s fire is always suitably aggressive and intimidating I’ve said it before and I’ll say it again, firing off Colen and skittle together gives a very satisfactory forest of burning branches the little peeping creature from Red hood is both smoothly rende…

I find most animations to be fairly good, though some can be improved, especially the copy-cat ones like Elradir & Horghall…!

However, Mainly, I want the heroes to be Alive (Odin, Hatter, Vela) = moving when clicked on like many are…
BUT
Many are simple pictures that don’t move, (last 4-5 HOTMs) which makes them look like dead beauties…

So yea, while SG can improve some animations, they have lots of heroes to LIVEN-Up & make them Alive !

Noticed that since Malicna, hotm dont have animation anymore when you zoom on it
They look like random 4* and s1 5* now, why ?
SG dont want to put effort working on that anymore ? or its because hotm are too weak nowadays and dont deserve to be animated

13 posts were merged into an existing topic: No animation for new HOTM

This is misleading, I didn’t mean animation from heroes when they were clicked. What I meant was animation when the hero casts its SPECIAL SKILL. Something like Heimdal with his Horn animation or Elizabeth with her unique Spider animation.

Yeah, that’s why I was confused. Even the moderator didn’t even get it.

Ok what have I missed… 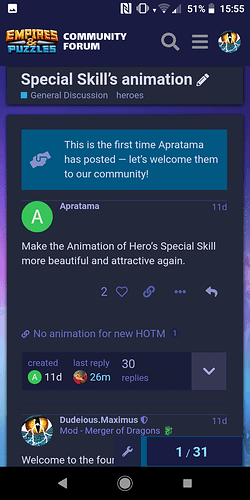 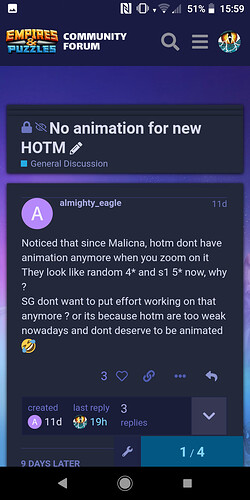 Both are the original starting posts.
Both asking to make the animation better on hero’s correct.?

Actually now I get it. Sorry to @almighty_eagle I read yah post wrong.
Reopend it and moved stuff over.
My mistake sorry to all on the fourm.

Actually, @almighty_eagle was asking the reason why HOTMs card doesn’t move when we click a specific card in our rosters. He was asking the “reason”, meanwhile I’m the one who asked to make Hero’s animation when they cast their SPECIAL SKILL to be more attractive and more beautiful again, just like what they used to do. Some people here were misunderstanding, including your fellow moderator, I guess.