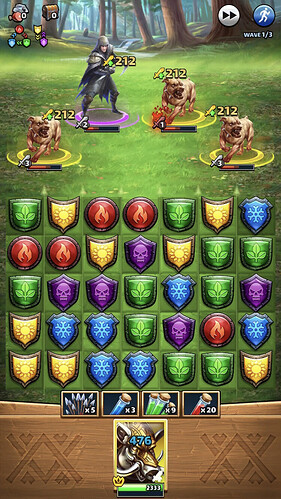 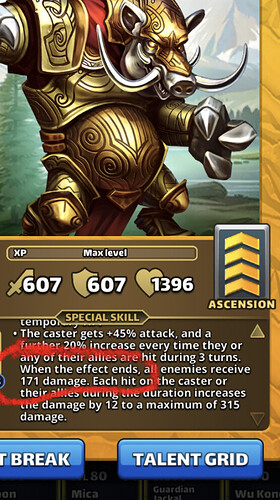 What’s wrong with that?

I guess the OP is referring to the difference in the numbers of the damage given on the card (171) and the damage dealt to the enemies (212).
Firstly, the damage is increased be 12 for each hit Gullinbursti receives during the duration.
Secondly, check the troops you assigned to Gullinbursti. They might add further damage increase.

He deals damage when he uses a special skill, and this should not be the case.

Actually I think that it work as it should, when you using his special when his buff is active you remove old buff so it ends.

When Gullin die withbuff on it also triger this effect.

Or when he is dispelled.

he began to act like this only from version 39

Will he do damage again after his buff wear off ?

Well, at least a little more of an explanation in the starting post would’ve been extremely helpful then…

However, i think it is working as inteded as well. I checked and it only happens when you cast Gullinburstis special skill while an old one is still active. Hence, the old one ends and deals the damage.

Normally, Gullinbusrti attack is not fired if replaced by Guillinbusrti self.
But now,… if this work like this, maybe it is intended? But no info in V39 change, and I haven’t test it my self.

And what I was doing normally is while mana charged, wait buff dissapear so that after fired then I cast the special. But now, this is ultimate as OP title said. Great, so we do not need to wait to get more advantadge.

Strange, mine didn’t deal the DOT the moment he fired

Okay, saw it, but it should be a bug. Although I have no problems with it

Now the raid tournament will be, 4* without purple on very fast mana.

I don’t play tourneys anyways, so that’s not a problem to me. But yeah, no purple rush, good luck to everyone participating.

Yes, he also does this whenever he is dispelled. And it’s always MAX DAMAGE, even if no one has been hit at all. In fact, I think the damage actually goes down once someone takes a hit, until it rebuilds to max level.

And this bug totally wiped out my team in the tournament today! Oh, well