I’m not trying to be a whiner, but the Special Skill Level RNG has been hating on me pretty hard lately. I have multiple 4* heroes almost to 4^, but their skill is still at 4/8. So frustrating!

Also, word to the wise… that last thing you wanna do is feed trainer heroes to a 3* costume. Sounds great to level them up so fast, but you’ll hit 3^50 at level 4 and will burn a LOT of heroes to get that special skill to 8/8.

I couldn’t find anything about it in the other threads on this topic and they were also pretty old, so I opted for a new one.

Anybody hear about any improvements to this system? Consistently losing with percentages over 30% made me feel like it was broken, but I know better. Maybe just a long, long string of bad luck. it’s been bad. probably 4 or 5 heroes way behind on their skill level after doing everything right, as far as i can tell.

To be honest it is frustrating but when you level them up to the max you can feed heroes of the same colour and get a ~100% special skill upgrade guarantee, not ideal but at least it works

this will not be an issue for long, trust me. Presumably you are a relatively low level player. By the time you get up to level 50/60+ you will have more 3* ascension mats than you know what to do with and this will not be a problem, plus you will rarely ever need to use a 4* that isn’t fully levelled.

Yes, your assumption is correct. (Level 24), just now starting to get the 3* mats I need to ascend a couple 4* heroes, but many are still at a wall, so its frustrating when they don’t level. I’m ok if they’re a bit behind, but when you level up a guy 10 times and the only time his skill increases is when you ascend him, that burns my buns.

@Jack_oKent you make a good point and that’s fine on the 3* heroes, but when you’re stuck at a mat wall on a 4* hero, it stinks, because there’s nothing you can do, unless you just wanted to waste the XP and backpacks are too much of a pain to farm for any of that garbageness lol

Yes unfortunately you just have to grind a bit more. Are you in a decent alliance? It helps a lot with Titan rewards

We’ve all been there and it is painful but as @Hubertpoobert brilliantly put it soon you’ll have more than you need.

We’ve all been there. I’ve said it before but I waited ages to be able to ascend Boldtusk. Compasses were nowhere to be found and Hidden blades…well, they were as good as there name.

Then you kinda bounce around just having enough for a while to get you heroes going.

Keep at it, patience is king/queen in this thing. 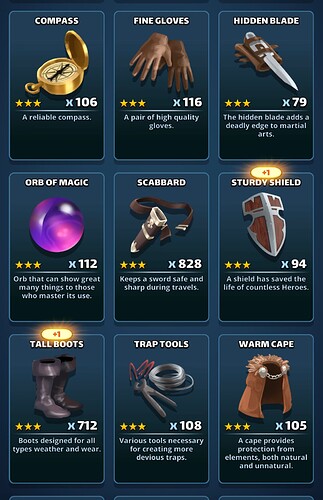 not sure that helps much

No, it does help about the mat wall. Grinding to scavenge enough to get a couple of them past the wall, makes the challenges and rare events much easier to conquer for more of those mats. already seeing that in action.

@Jack_oKent good point about the alliance. My alliance has some high level members, but only 6 or 7 are really active. Highest titan level is still only 5. trying to fill my war chest before jumping ship. Not sure the best way to find a decent one.

As for RNG hating on me with these skill levels, i guess it comes and goes. I did get lucky on a few. I do think the RNG system for skill level increase is BS… at least increase the chances when it doesn’t fire.

Really easy to find a decent alliance, just create a post in the alliance recruitment section here on the forum.

Just be clear what you expect and you’ll get loads of offers.

Just remember the standard bit about be sure to leave your alliance before matchmaking begins.

Good luck with the war chest!

Concur. I would prefer it if the special skill chances were improved based on what you feed. For instance, feeding a 2* trainer or above should significantly increase the chance of special skill improvement. Or, feeding multiple 2* or above heroes of the same color. I’ve found this to be the one biggest dissatisfier for me relative to the game. It just seems like it is an unnecessarily random element to what some would consider a relatively cumbersome process (hero leveling).

Or, feeding multiple 2* or above heroes of the same color.

I mean the times that I’ve personally had the issue of completely leveling a hero without maxed skill is usually at the 3* level (normal and costume). Maybe the costume 4* at times. Part of the “trick” is not to use trainers until you’ve maxed out the skill. As long as you’re feeding on-color heroes (1 and 2 stars) 10 at a time, you normally should get 8/8 on the skill by the time you get to 3/60.

Unfortunately, this hasn’t worked like that for me as of late. Have had several heroes that simply “won’t” move skill level at all. I have a Gormek that made it all the way to 4/37 and is just at skill level 6. Because up until the last couple of “feeding sessions”, the only skill improvements had come at ascensions, I’ve basically abandoned trying to level him up. Probably not the best of ideas but I have other reds I’d rather level up any way. I think the point is that perhaps every minor element of the game shouldn’t be left to such low odds. 3 times 1%, while mathematically significant, is not meaningfully significant. If you’re using a 3*, the chance should be at least 25% to start. You’ll note that I’m not advocating removing the chance element but simply changing the calculations to reflect the impact. Is just a thought. Just thought it might be worth investigating under the guise of QoL or game experience improvements. Thanks for the advice! I’ll give it a try!

If you feed the same hero, it does start at 25% for what it’s worth. That’s the other thing that I’ll do, which is feed duplicates to the hero. It all depends on your roster of course.

Yeah, it is frustrating. But just imagine how much more frustrating it was early on before they added the 5x boost once the hero was maxed. Feed ten feeders to a 4* 4/70 at 5/8 special and watch it not go up. Then repeat. That is frustrating.

Not sure the best way to find a decent one.

As @Jack_oKent mentioned, create a thread in Alliance Recruitment and you’ll be inundated with offers. Daily active players are a recuiters dream.

FWIW RNG has no favourites. FYI.

It won’t let me post an issue. I can’t seem to get my hero’s special skill leveled up. This is a frequent problem. I’m almost certain I’ve gone through 400% on levelling his special skill up after he’s maxed out. This has been a frequent issue with many characters. This most recent is Friar Tuck.

GL in your E&P journey.

That really is only an issue for me with 3 stars and 3 star costumes (where it is a major problem) and to a lesser extent 4 star costumes. Oddly, 5 stars are usually maxed by level 2/60.

Sorry that you are being cursed.

I have Sonya at 4/23 and her special skill is still stuck at 4, which means the only times her special has increased is from the guarantee via ascension. I have ONLY fed blue heroes to her. So stupid. For all the resources we have to pour into these stupid heroes, it is infuriating to have to feed them even more because they dumb the chances down so much. It is not as much of a problem on 4* heroes, since they’re usually maxed by 3/60, so maybe Sonya is a fluke, but I also have stupid Shrubbear at 3/48 and still only at level 4 on his special, which means i’ll have to pour even more feeders into his belly to satisfy his hunger.

Is this really necessary? Why not make the odds better on 3* heroes? Especially on the costumes. Sheesh.