I was excited to get Cristo 6ish months ago. I maxed and emblemed him and shortly after removed the emblems. I didnt find him to be of much use. Of everyone Ive ever been in an alli with that had him felt the same, waste of mats

Yeah… he’s going to be slow… but if there is ever a slow hero you want to build around… it is ludwig.

Eventually, you can probably pair him with ahhotep and another sniper… get 9 tiles, hit with ahhotep, then snipe… then ludwig will be charged…

Even without the emblem bonus… and even with only a lvl 7 mana troop… you can charge him in 9… in this limited situation that I described.

I would rather invest in either Ludwig or alfrike.
Ludwig will eventually be a great hero for u. Taunt with mana boost is useful across the game. If the game is only about raid and war his speed is going to be a problem. But there are events towers tournaments where he can make a lot of difference.
Cris is situational and can be underwhelming in lot of scenarios. So I won’t invest in him.

Thanks for sharing your thoughts!
I won’t go for Cristobal… yeah didn’t realize how situational he is… I guess I didn’t pay attention to the conditions for maxing his damage.

I guess I will just grab Finley for SE and take Onatel from FS rather than 2 yellows.

Mana troop not enough for 9 tile Ludwig, you need Xnol AND a magic/Styx troop for Ludwig, hence why I still haven’t decided whether to get him or not as am missing purple Styx/Magic troop

I have no phone battery left and must decide before I sleep… Ludwig (I have no Magic/Styx troops but do have Xnol), Finley (two in one and I lack blue snipers [yes he is more than sniper] but have Bobo for Titans), or Faline (I have White Rabbit for tag team, but also Bruce Lee so not really desperate for another hit three yellow). Emilio I think I’ll pass due to Garnet filling that role. 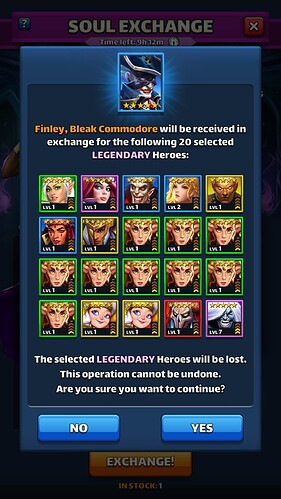 Would pairing Ludwig with Odin help out his tile count? I’m still on the fence as well.

It would help… But if you charged odin first before any dark tiles… Still would take 10+.

I think I’m going to do a guess tonight… Based on the last one… Essentially… What if we swap out the hero that was… With one that is in that group… And how it would have affected our decision.

Is it reasonable to infer that on 6 February 2023 we might get…Wolfgang?

My guess is that if there will be a CoK hero, it would probably be from the Raven family. Giving 3 “free” heroes from the same family, with those kinds of family bonuses, would be crazy.

Possible or esme.
Maybe they are offering knights so we can prepare for the dragons.