And what a 5* to have as your first. I’m sure mine was Thorne

I did use him extensively back then but time hasn’t been kind to the old men. I’ve kept him out of nostalgia though. Who knows…maybe one day I get his costume and he finds his way back into a team.

Funnily enough, his is the only 5* costume pull i’ve had from costume chamber!

funny how RNG is in this game… Thorne was my very last vanilla 5*, just got him yesterday to complete the set

I had some amazing beginner’s luck in this game, my first 8 5* were all non-vanilla… I don’t think I got my first vanilla 5* until about a year into the game! (my lucky streak ended for a bit after that though lol)

Now you have me thinking who my first non-vanilla 5* was.

I know Grazul was my very first HOTM and Khagan was the first hero I got out of a Portal. In fact I think that means Khagan was in fact my first ever 5* as that happened before Thorne who came of on my first ever TC20 pull.

I got Tarlak fairly shortly after…

I’ll have to check if I kept anything now. You had my curiosity but now you have my attention

Confirmed as Grazul. Well there we go.

Grazul, nice! a very good first non-vanilla 5* in my opinion

I gotta say that walking down memory lane in this game is fun! I smiled a lot when recalling which 5* I got when, and considering how difficult to get they can be, I can even recall what I was doing (besides playing the game, some smart @sses out there will make that crack lol) when I pulled some…

Aegir was my first, got him together with Gormek, was waiting for language class then

I got Seshat while sitting on the couch waiting for bedtime

Francine, while I was just waking up, and I nearly gave my man a heart attack because of how loud I yelled lol

Santa while making morning coffee, and I nearly gave my man a heart attack again

Lepus, while I was in the Istanbul airport waiting for my flight home

Aeron while on the bus to work

Yang Mai while on the bus to grandma

With your luck on attack boosting heroes, Oceanus will be yours from your first free atlantis coin pull!

Funny that, of thousands of ha10 comments you and all your Miki’s stuck with me😂

Very odd on HA10. I had incredible early luck with Miki & Hel and then it was a few dupe HOTM and then probably 6 months of nothing since.

Gained a Mystic Vision EHT yesterday. Because I wasn’t expecting anything either, the Tyrum pull came with a random bonus draw of Arfanis!

Will add picture later because I made sure to screencap it. It was like when I finished S1, got Tyrum and then Grazul in bonus draw.

I broke all the essential rares and epics before thinking about the legendaries and I have no regrets, some are as useful as some legendaries, specially s1.

I decided to break the penguin because he is still very strong compared to my other heroes, but soon the game should make him obsolete because unfortunately they don’t stop selling broken heroes every month.

I will make the most of my penguin before he becomes weak. As things stand, it won’t be long. soon i plan to break lady of the lake, ariel and motega, which i also use a lot. and one (and maybe two) pirate marjanas.

but first, finish what I already have and finish feeding, giving emblems and breaking my dear new Sergei too.

Ok now I’m jealous!!! Have been waiting for enough aethers forever and when I got them I was/am sceptical on which lucky fella to choose. I wish my guys would take a poll!!

I’ve broken him first because I had enough aether for 2 legendaries… So I was like “why not!!!” hahahah It’s not like I’m pulling anybody better anyway… XD Thanks!

That’s nice. I’m just waiting for the proper contestants to lvl up enough 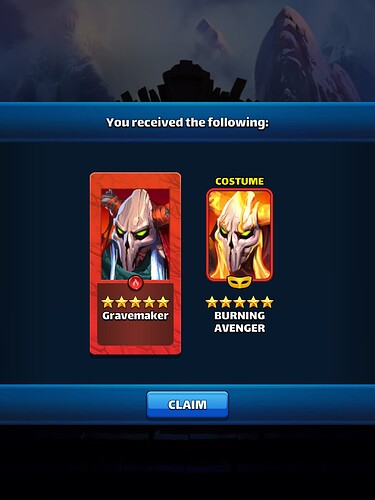 Got this last night. The chanting, “come on, come on, something good, something good” while the hero was being pulled in portal seemed to do the trick.

A new record for me on a dark titan. Jackal has made a big difference. Trying next for 200k+

Forgot to upload the pic I took of the special moment! 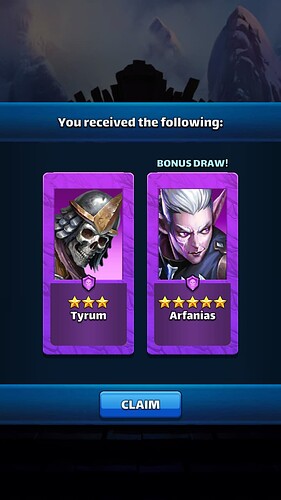 Congrats. It’s a good card. I was happy and surprised to get him yesterday too. 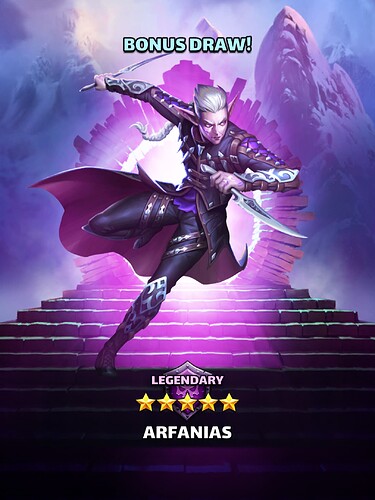