Having trouble purchasing some of the offers.
Not sure if its connection issues my end or a server issue.
I’m getting a error message saying ’ Error while retrieving information from server. DF-DFERH-01.

Any information is appreciated

same issue, I can confirm it affects players globally, speaking with my aliiance mates from around the world, afew also reported same problem.

@Dudeious.Maximus so maybe not a player specific issue, could merge with Unable to proceed with purchases.

@PlayForFun isn’t it a serious issue to report to staff for their attention? 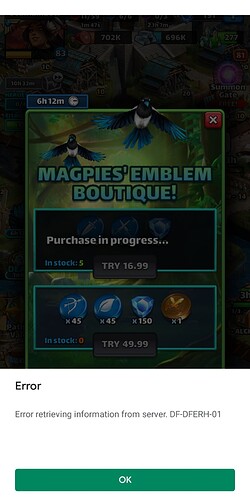 @Elioty33 that seems to be another issue for me.

I have raised Staff’s attention to this.

Meanwhile the effected players can ask Support in the game.

Should be fixed asap. Affects the money train.

Thank you for the report. We have contacted Google about this issue affecting some purchases on Android. I’ll update this topic once we know more.

My apologies for any inconvenience caused by this issue!

I tried to buy the covenant offer just now and cannot proceed on my Android device (pixel 6 + Google play). Receiving an error from Google play.

I’ve attempted 3 times, using 2 different cards. I noticed the transactions were recorded on Google pay but the in game granting isn’t going through.

Google pay screenshot attached. 2 transactions earlier today were successful and they were payed to “Google Zynga Inc”, while the 3 failed ones are paid to “Zynga”

Can someone help me find the right person for this issue? Thanks in advance 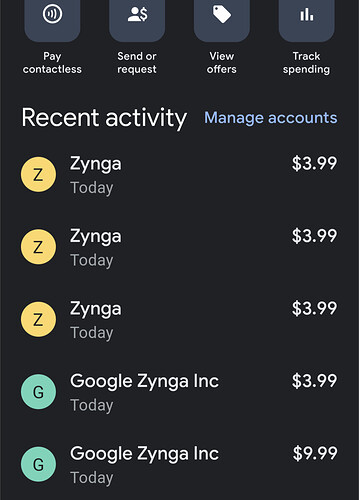 By failed ones, I mean payment went through on Google pay but no in game granting happened.

I purchased the 9.99 offer and 1 out of the 3 3.99 offers earlier today (also reflected on my Google pay screenshot)

The remaining 2 3.99 offers were not able to be granted to me despite the successful payment. 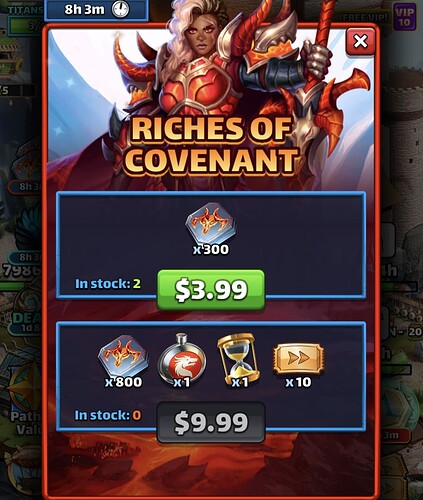 You need to file a support request for them to check your particular account and grant you your missing rewards.

I cant buy anything right now. Would appreciate if you would extend the ticket sale until you get this fixed.

This issue should now be fixed by Google, so I’ll mark the topic as solved.