Hey I was just farming season 1 and hitting a few raids to boost my cups when an icon popped up…you were raided and lost…I revenged and won but…How can you be raided while actively playing?

If you’re in the top 100 you can be raided anytime. If they start a raid before you get on, but then you get on the raid continues and it’ll show the notification once the raid is done.

I had the same issue yesterday and I’m deep in gold teer, nowhere near the top100.

Sometimes a raid was on-going when you were logged on, so you’ll see the message about the outcome pop up after you’ve logged on.

Now it has happened for the second time after last updated that I get raided/raid revenge while I’m playing. The last time it happened I had just been farming 12 rounds and when coming out from the last round I got a message that I had been raided…
So, online, NOT in top 100 and still got raided!?

@JudgeGnav you mentioned that you logged on, farmed 12 rounds and then received the notification you were raided. This sounds correct as the raiding notification does not appear on every screen (farming, titans, etc.).

What likely happened was someone started a raid on you, you logged on, went to farm, the raid ended, then you finished farming and returned to a screen where the raid notification is allowed to display. This give the illusion of being raided while online, but in reality was a raid started before you logged online.

There appears to be a glitch in the raid system I an d other members have been raided while online an this morning I was able to raid an opponent 4 times of course because of our screwed up algarythm I lost all 4 times. With this glitch the raids continue to be the most unbalanced and ridiculous part of the game not based on HERO or team strength just screwed up

Here is from my raid log, and I was raided while online and raiding… 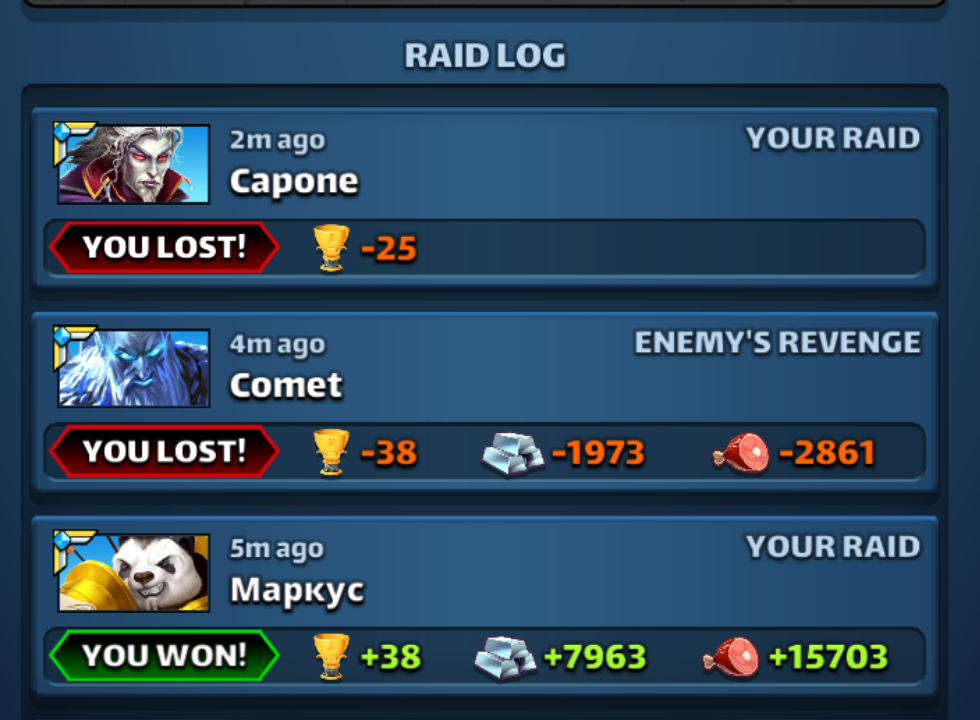 And I’m not a top 100 player for whom these rules don’t apply!

I have seen this twice now. Both times logged in for over 30 minutes easily, and likely over an hour. It started happening after I was raiding in top 100 for a bit, but long after I was no longer in the top 100. Not sure if that is related (some flag not being unset). Both were revenge raids.

I think the notifications on raids can be off, I was waiting for Titan loot to come up and got a raid notification but the time index said 2 hours ago??
I thought you were late on this one.
But folk in my alliance have complained about this happening to them, getting raided while online and none of them are in the top 100

Someone mentioned cheaters?
I have no doubt cheaters exist in the game in some form or another.
I find raids kinda easy as the A.I is abit of an idiot lol, I’ve tricked it loads of times into doing things a human opponent wouldn’t do.
So it shows how bad they are at the game IF they need to cheat to win a raid.

It’s now 5 times that I have been raided while online… Today!
For the last incident I can just say that I have been online , chatting and been active in leading/helping in the WA since it started almost 2 hours ago… And I still get raided…
And I can’t avenge because my attacker is online!?

I have never seen a message about a different internet system, and in fact it doesn’t even seem reasonable that this could be an issue.

did it perhaps say a different version of the game? That happens every time they push out a new upgrade.

If there is a way for someone to cheat at anything they will do it and Empires and Puzzles is no different. I have automatic versions updates and stay up on changes…if someone had a different version then they would or should be incompatible to attack me right?

I’m not whining about losing a raid, I just want an fair, even unpolluted game for all.

I believe this comes down to a timing issue. If a raid happens and the either side upgrades and the other doesn’t a revenge raid isn’t possible.

in THEORY, any version mis-match means a raid can’t happen.

I’m also pretty sure there are a number of people who know the version thing, go on a raid spree and then upgrade just to protect cups for a little while. Because releases are staged in, some % of those they raided will not be able to update in time to revenge.

yes, it sucks, but that would be very hard to code against, since you don’t know when people will update. On the other hand, it only happens within a few days of each update. After google/apple have rolled out the update it is forced on everyone.

Just got raided while looking for Santa in the sky. What’s going on here ?!?