I didn’t get titan loot as many of my alliance members did. Is this due to the fact that I’m the only one using version 20?

11 Likes
Titan loot -no rewards
Bug with rewards from TITAN
Titan Chest Credit No Titan Loot
Missing AW Loot and War Chest freeze
War and titan loot pop ups are not showing! Game freezing
Did not receive titan loot
Not getting loot from titan
Claimed but not received titan loot
War loot never received from this last war
Titan killed not ricompense
War loot, titan Loot not adressed
Missing titan loot
Raid tournament No Loot received or Rare Rooster Titan
I'm not receiving titan loots since last update
Titan kill without loot
No reward for titan
I dont reciving titan loots
No message about titan loot
No loot after Victory over Titan
No drop for winning war
Bug i think
I didn’t get loot from titan
War gifts?
Problem receiving a loot after update
Titan loot problem
I made the final titan kick and I did not get any reward
No loot for titan finish
Cant get rewards from Titan loot
Garanwyn March 20, 2019, 2:40am #2

Did you not get any loot at all, or did you just not get the pop-up window showing the loot you got?

I got absolutely no loot

Definitely sounds like you should submit a support ticket, if you haven’t already done so. Here’s how to do that:

I hope they get it resolved quickly for you.

Thé same just happened to me. I thought maybe I missed the pop up but I got no new available summon ( from a token I should have got)

If you didn’t get the pop up… how do you know you were supposed to get a token?

I dont ever remember not getting a token from a Titan (we are talking any token, grey one included). I though they were guaranteed?

Sounds like you have had a token lucky streak

Then I would like to change my stance, I am now reporting a bug that I have a 100% token drop rate on titans

Some 7 minutes ago we killed a titan and I did not get any loot.
Alliance: Suomen Tasavalta

I did not get the loot screen (window) and there are no new ites in the inventory.

Same here, not even the kill screen, no loot.

Hey guys,
It’s look like there are a lot of people with the same issue,no rewards after killing the titan…the developers team looks so pro and they have tested a lot the application before releasing it. GREAT JOB small giant for laughing in our faces again with our money and our time invested in your stupid game.

This happened to me as well. Early in the morning I was 4/5 on my titan chest and we were close to defeating our titan. I upgraded the game and took a break. I came back and had a 4/5 on titan chest but it was glowing like it was ready to open. I checked the chat and saw that we defeated the titan but I never got a notification and I’m not sure if I got any loot since I dont normally look through my inventory and I had a lot of new notifications. After I closed the game and reopened the titan chest said 5/5 now but I still got no titan notification.

I did not receive any loot and I prolly don’t. I’m going to have to take a break and stop playing this game. It’s frustrating and it draining

I sent a ticket to support. They are looking into it. I hope you’ll send one too 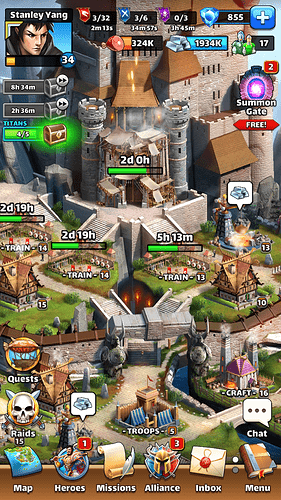 I enter the titan tab, and it already say “defeated” instead of “processing”. I was contemplating on sending a ticket, but around 30 seconds later the titan loot come out and the chest display 5/5 correctly.

After I closed the game and reopened the titan chest said 5/5 now but I still got no titan notification.

I guess I made the right decision in not closing the game… I probably would have lost the titan loot like you do if I close it.

@Petri I and @JLB_ep have identical issue regarding the titan loot and chest. I wait a little longer while he close the game, I ended up getting the titan loot window come out while he didn’t. Perhaps this information can help in fixing the bug. Thank you.

Same here - no loot t all

Hello, I’m having the same problem … I did not have any loot on the Titan while the rest of the team did. it gets really annoying