So after hard work I reached 30 viable heros for war.

Then question now becomes where do I go from here. My aim is top 100 in one way or another

Which five should I take on forward(horgshall?) And in general how can I proceed from here to high places?

Thanks in advance people… 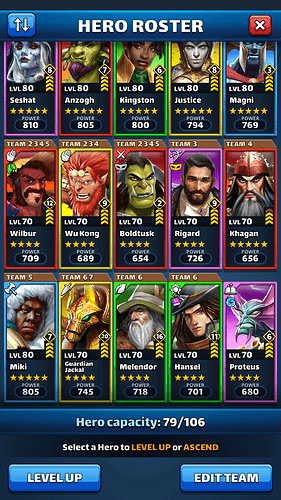 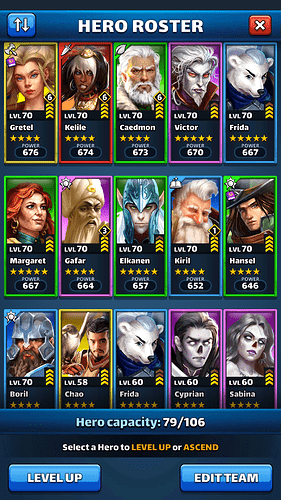 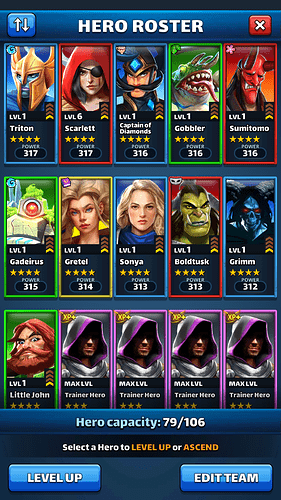 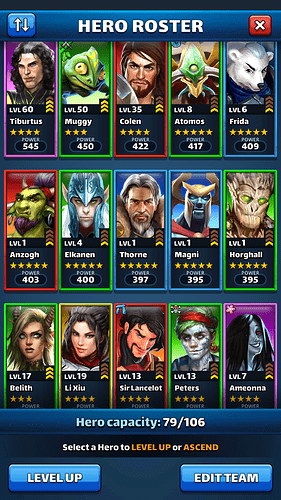 Make sure you have three troops of each color at level 23.

You’ve got some fun heroes!!

Triton for his heal aid.
Scarlett for her attack stats
Grimm to stack with frida
Lance for events
Colen for fast 4* raidT
LJ for high attack stats on titans
Gad for attack buff on titans
Cabin boy for the silence

Just because you have 30 doesn’t mean that they’ll all work well together. Always good to have options.

The thing is In that order to go beyond where I am I probably need the new five stars.

I have each if one color troops of 13 level…

There is no task for this crappy hero… Sir LancelNot… Some noobs told me once is good at events, but couldn’t explain how. At events, for those running a mono red, the right heroes are BT, Wilbur, Falcon, Colen and Scarlett. Gormek also has no place because Wilbur. LancelNot also has no place because BT which already gives atk boost (to all allies, not only to nearby). Mana generation bonus is meaningless in such situations. Also, this hero is so squishy, that actually dies from several slash attacks in some advanced stages.

Leveling LancelNot and Agwe were my 2 mistakes I’ve done in this game. At least they were good as trainers, being maxed when I fed them…

Not sure this is entirely true … especially with emblems and costumes… one of the guys in my alliance has Mel costumed and emblemed to 18 with an 845 attack! How many 5*s have that… for that amount of resources.

i agree that he’s underwhelming, hits like a feather, dies easily, and doesn’t generate much in the way of mana

I have GM, Ares, Marjana maxed. All red epic heroes maxed. I prefer to keep Azlar at 1/1 (for the future HA), to use the red feeders on other colours, than to level Azlar

90% of the time, slow heroes cast their specials too late (on offense)… It’s the nature of the beast. Now that I know what I’m doing, I’d really pause before ascending a slow hero. My next one will be Lady of the Lake, with some trepidation, but I adore her special enough to take the risk.

Kunchen? Fantastic on defense, but I’d rather have Rigard on offense…

Anyway, to be fair to Azlar - he put me in the top 1% for rush attack tourneys, and occasionally wins a war bout with that burn all. It’s a mighty special. But I still kick myself for blowing rings on him, when I have Red Hood sitting at 3/70 in the stables…

Ok well scarecrow is wrong, again. Lancelot is frequently in top ten event teams for epic tier. I can tell you why. His tile damage is high due to his base attack stat, and he hits. His attack boost/mana boost isn’t what he’s used for, although the attack boost might help

His squishiness doesn’t matter as people competing in the event farm for a great board and their heroes never take a hit. Kainboy has won several events in epic and legendary tier so if scarecrow will call him a noob, he’s totally lost. And kainboy uses Lancelot in epic tier instead of boldtusk. The healing and attack boost is good if you want top 100, but winning the event takes a perfect board and the extra hit from Lancelot can mean finishing stage 10 in 40 seconds. Kainboy sent me the video of his stage 10 winning score from knights of Avalon, his team was Wilbur, falcon, Colen, Lancelot, Scarlett. He made one tiles move, it was an 8 combo, and he finished the stage in 40 seconds. Boldtusk would not have helped him do what he did.