I finished in the Top 1% of the recently concluded 3* Rush Attack tournament. It’s been a while since I made it there. It’s just sad that I did not get any worthwhile ascension material. 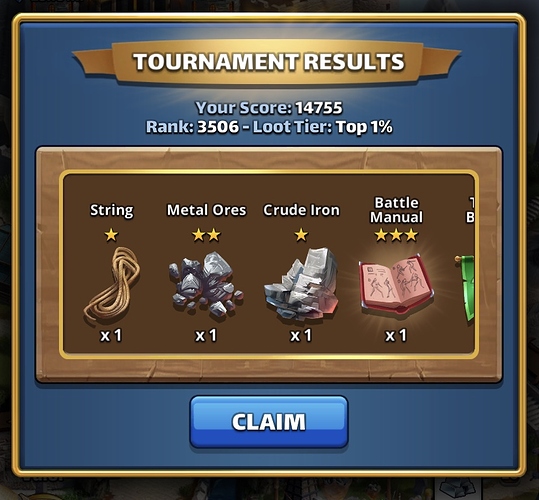 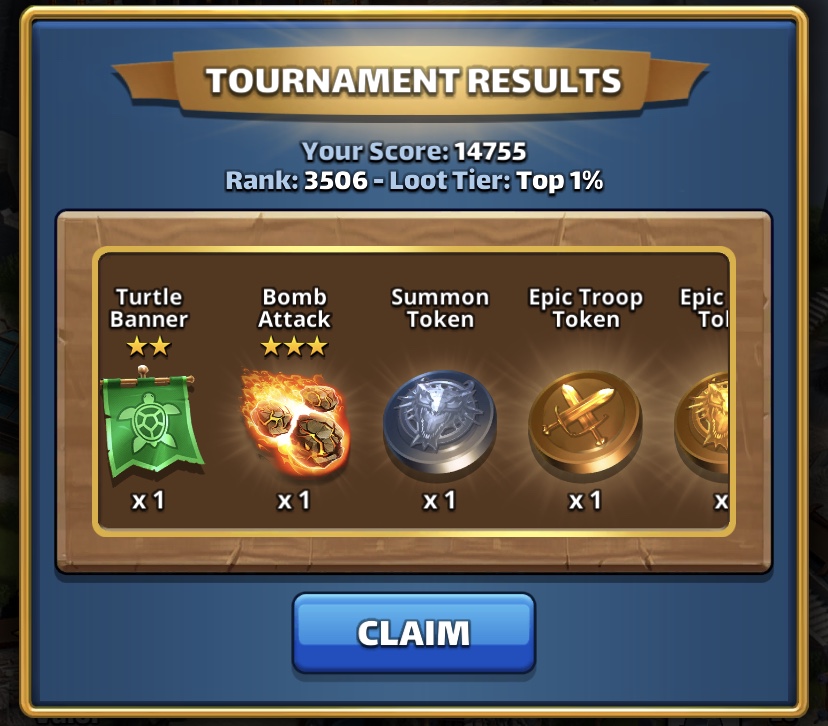 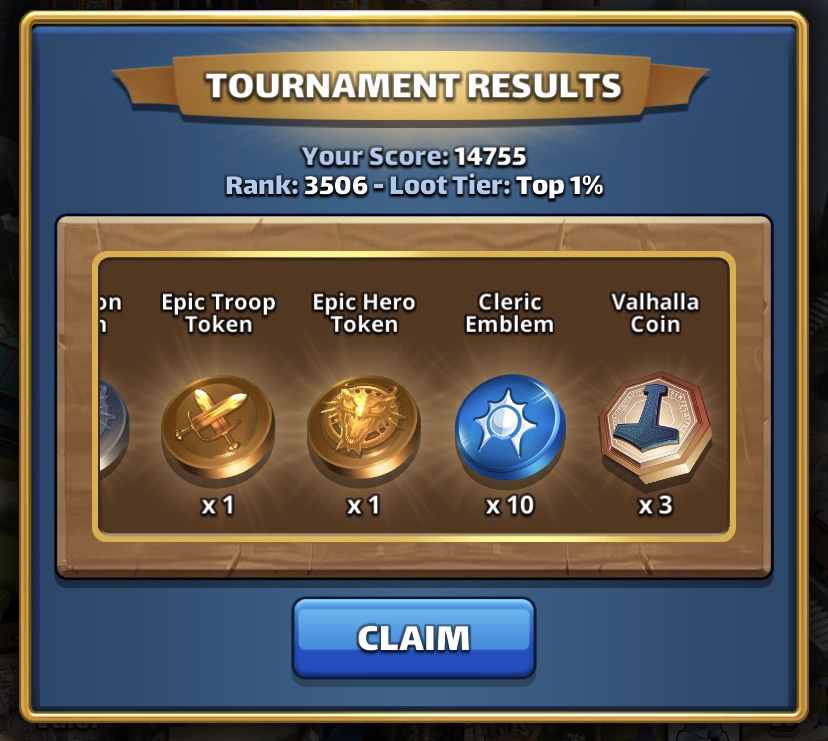 And for once, my efforts in finishing a titan on an A+ rating were compensated with a nice reward.

May I post another small personal victory? Haha. I just joined the 100K club for titans, as I made a single 100K+ hit on a 5* blue titan just now. Not really a strong titan, but hey, I’ll take this as a progress in playing the game.

Congrats! Of course you may post that, it is certainly progress regardless of the titan level. I’m about 300 points shy of hitting the 100k club myself… I may never get there. Not with the boards I’ve gotten lately anyway, haven’t gotten anywhere close in ages. But what can you do. I came very close. Very very close. While the illustrious @JonahTheBard was visiting my alliance, no less. He saw it with his own eyes. Not sure if he remembers, but he quoted something like “wow, that was literally one tile away from 100k”.

It was. Literally. One tile away.

It’s okay though. I’m still making progress in the game, albeit at a snail’s pace. Nothing worth posting about here anymore. I’ll leave this thread open for the rest of you to post your own accomplishments that may not mean much to the top level players, but are accomplishments that each individual has been striving for personally and finally achieved. Because it’s a good feeling when that happens, and I’d like to leave this forum with good feelings.

I gave up on joining the 100k club.
One day I got a ridiculously good board, and I finally did it!

For reference: I have a maxed Miki in my roster. Just begging for a board full of blue tiles on a red titan.

My alliance rarely ever gets a red titan. When we do, I barely get any blue tiles.

Most of my alliance’s titans are yellow.

Others in my group can confirm that. It’s actually a source of constant annoyance for some. To quote one of our newer members: “what is it with you lot always getting yellow titans? I hate yellow titans”

I have given up fighting RNG. That is one fight I cannot possibly win.

Not the same feeling as the first couple but still big satisfaction. 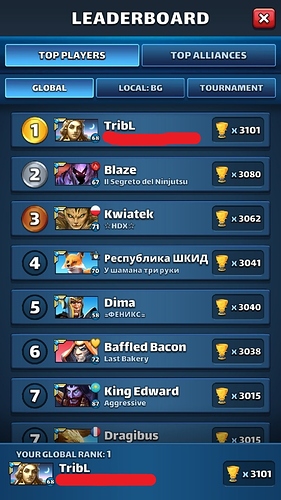 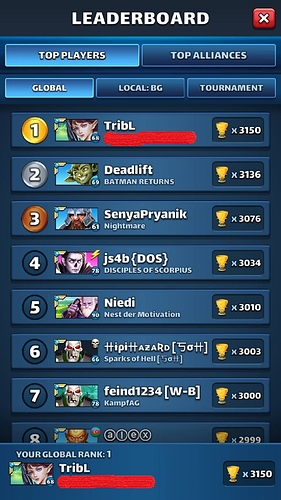 After almost 2 years of playing, today I finally completed Season 2 hard mode. I’ve been steady plugging away at this for so long now and beating the final stages this Atlantis was a lot of fun. Season 3 here I come! 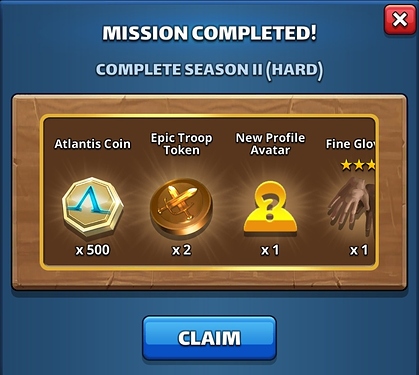 hurrah! some great accomplishments here. keep plugging away everyone!!

I have never spent gems on troops.

Approaching 3 years of playing, I finally got my first 4* red crit troop to complete a full set of rainbow 4* troops!

PS Thanks for starting this thread @TGW!

Do you really run 5 rainbow teams in war?? 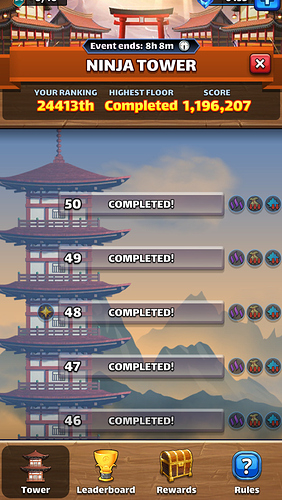 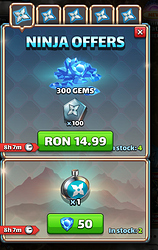 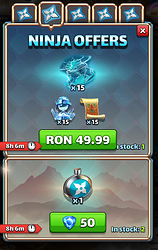 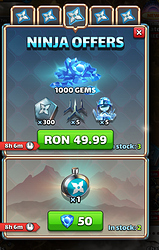 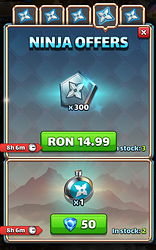 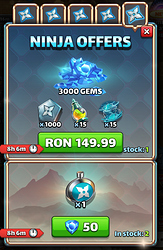 Another try, another success! 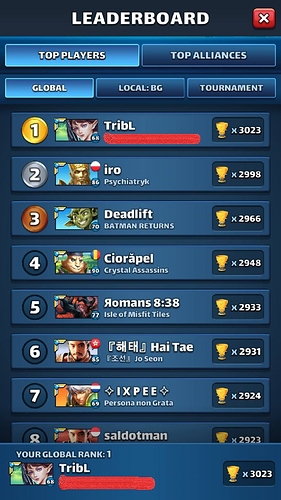 After almost 25 months of playing, last night I was able to put together a rainbow team of maxed legendaries. Green took its sweet time about showing up. I maxed three legendary reds before a legendary green ever showed up! 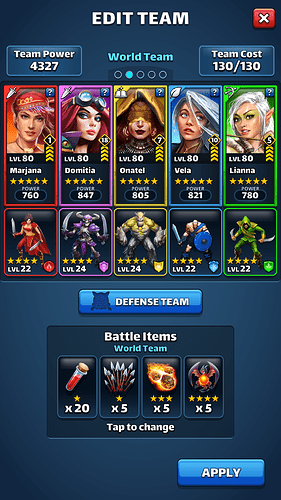 you always remember your first

5s are so rare for us that I remember the rough order i received each 5, and the order i’ve maxed all of my maxed ones! congratulations, that’s a sweet rainbow team there

5 s are so rare for us that I remember the rough order i received each 5 , and the order i’ve maxed all of my maxed ones!

Yeah, I could get pretty close, I think. I know Onatel was my first-ever. You sure as heck don’t forget when your first five-star is the HotM! After that, Poseidon, and then I got TC 20 up and running and got Domitia on my fourth pull, and Thorne a few days later. I think Azlar was next after that. I remember having a serious debate with myself about whether Onatel or Poseidon would get my first set of darts. Eventually chose Poseidon, which is a choice I’ve been happy with long-term. He’s still the most powerful hero on my roster at +16.

I have similar. WARNING, this has turned into a history of Sleepyhead’s account…

Aegir came first, then Aeron, then Inari, Lepus and Margaret in a flood. Finishing Atlantis Hard gave me the mats for a Blue, a Yellow and a Green. So Inari and Margaret got ascended without much thought, while I had to think hard between Aegir and Lepus (both of whom were already at 3/70).

I prioritized offense… so Lepus won out. No regrets, he really upped my game. Sure, my defense still got thrashed a lot, but I was able to revenge fairly easily

Then Gregorion and Rana came… no regrets though, as Margaret and Inari had also upped my offense (in a different way, where Greg and Rana would have let me hit harder, Inari and Marge allowed me to survive longer!)

then my 6th tabard showed up, and I was debating whether to pull the trigger on Aeron…

… then out popped Seshat! I didn’t need to think a second more, Aeron got relegated to the bench and I poured everything into Sesh. She’s still easily the Queen of my roster. costume Sartana and costume Joon have a higher card power, but they don’t have the deadly combo of longevity and snipe that Seshat has!

2 per color except Red.

And then my summoning luck went on hiatus. But my TC20s had caught up, so a whole bunch of vanillas came flooding in.

(this one was funny, Joon’s costume came like a week before Joon actually did - back when the costume pulls didn’t come with the heroes!)

And I had my next batch of mats. Except Tonics, for some reason Tonics hate me.

Tally at this point:
Ascended 1 Red and 1 Green, and 2 each of Blue, Purple, Yellow

Right, TC 20 kept churning things out… Richard, Elena, Kadilen, Elkanen, Justice and Malosi all joined the family in quick succession, as did Richard’s and Sartana’s costumes. and the next batch of mats came.

Tally at this point, with 5 new ascensions:

Then I got a streak of amazing luck, 3 Mystic Visions in a month with Darts. And the Sand Empire and Shiloh Desert both came around, giving me two more Darts. I took it as a sign…

… and Malosi got the call. I already knew he would be ascended over Leo and Justice, so I did not hesitate. And he’s been a key part of my Yellow squad ever since, blocking some of the most annoying defensive heroes like Telly. And he’s saved me against Kunchen and Ursena tanks when the board has been bad. One of the best choices I ever made.

Since then, Azlar, Horghall, Obakan and Magni have also come out. And I had enough rings, so also pulled the trigger on Azlar (still have 8 Rings now! and he’s great on offense) plus dupes of Sartana, Elena and Kadilen… and triplicates (!!!) of Richard and Joon!

But at this point I’m sitting on four ascended Yellows, three ascended Blues, Purples and Reds, and two Greens. Three per color is plenty, as I have great 4*s backing them up.

And my Green squad has a strong support backbone of 4*s (2x each Melendor w/ costume, Caedmon w/ costume and Hansel, plus others) so I’ve held off on spending my Tonics as I only have 7. Who knows, Mother North might finally come this Christmas…

for vanillas, only missing Lianna, Vivica, Thorne, Khagan and Quintus. If I do pull Lianna, and don’t get Mother North or Francine, Lianna will get the mats. As for the rest, I’ll wait and see how the costumes pan out - though I’m leaning Magni > Thorne, Leo w/ costume > Vivica. but things can change quickly and I might suddenly get lucky…

I couldn’t have done that well on my entire history, but reading through yours, I think I would have probably made the same choices. Well done, and good luck on landing Lianna. She is as good as advertised.