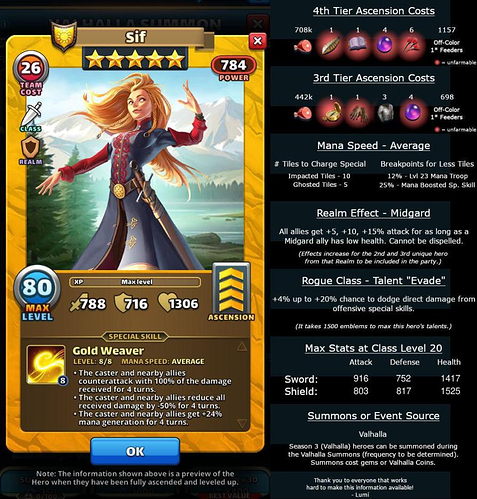 There appear to be no changes to Sif from her last-seen Beta stats, skill, and design.

What do you think of Sif?

This thread is for thoughts and discussion on Sif.

Based on preferences Forum members have expressed, please try to stick mainly to Sif and not wander off topic too much to other heroes.

*NOTE: Summon Results posted without any commentary/feedback at all should be flagged as Off Topic and removed, based on preferences expressed by the Forum community. Please include some comments about what you think of Sif when posting Summon Results. In addition to opinions about Sif, you are also encouraged to include how many Summons it took before receiving Sif (or how many Summons you’ve done without receiving Sif), so other players are presented with realistic experiences of the rarity of Season 3 Heroes.

Is Sif worth Summoning For?

How many copies of Sif would be useful to keep & Level?

What do you think Sif’s Primary Purpose is?

What do you think of Sif compared to other Heroes?

How does Sif’s Special Skill and Intended Purpose match her Base Stats?

Is Sif worth giving Rogue Emblems to?

In Defence, where do you think Sif is best used?

How do you think Sif is best used?

If the received damage is reduced then how will the counter attack will have an impact ?

The damage reduction happens after the counterattack — so you get the benefits of both.

The counterattack amount will always be the full amount.

Adding in that Sif is the one 5* hero in the current release that I’d love to get!!

That was a bug, and has been fixed.

Yeih got her.
Hope to lvl her fast. Will take some time (im more new - lvl 28 atm)
Had not a single reflector until now, really happy to have a 5☆ ref now!
Shes a tank of course, right?
My team atm (left to right) is rigard / kingston / boldtusk / triton / justitia — how would you suggest to change when adding sif? Just instead of boldtusk? Or dismiss rigard or one of the snipers?
Somehow special of reflect from sif and special dismiss from justitia is also not perfect together. But i have no other leveld multi damage hero.

Oh yes, I need her! She’ll be my BK’s best friend. Better than Elena in that pair and she has an average mana.

Except that combined with BK, that’s two heroes with no direct damage, and if BK’s special is on, Sif’s riposte is not as effective… so maybe not the ideal combination.

Does BK’s special actually combine the damage that would have been caused before the reflect happens, then? I wonder if it is actually working as intended.

Yup it does and yup it is

Sif is a better option than Elena as her damage reduction offers a fail-safe if the flesh wound doesn’t trigger.

I stand corrected, then.

It’s definitely nice that the damage reduction happens after the riposte with Sif. Having two utility heroes while none of them are healers is not quite my style of play, but definitely something to ponder. Elena does have the color stacking advantage when combined with BK, and she deals damage, so that combination would have my preference (theoretically).

You are right that it offers several options, all with pro & cons, depending on your playstyle.

Personally, I’m not a big fan of slow mana heroes. Sif being an average mana hero, meaning she can be charged in 9 tiles with proper mana troop if remember correctly.
Also she has the mana generation bonus, speeding the things after the first use of her special. Can definitely be a “fun” way to play in offense, not by attacking directly but throwing tiles and counter-attacking!

gonna have fun with this

Note that this buff can be pierced by rangers

Atm I’m running MN - BK - Ursena - Drake - Vela. Maybe Drake out for her, but then there won’t be that synergy with BK…
I have some time to think about, once my second set of 5* is maxed, the 4* and costumes are the next in order.

Oh Rogue. I only have Scarlett and Kelile and many Rogue emblems. And Margaret 1/1