My best results vs those teams seem to be with

I’m sorry if certain heroes give you troubles, but there are ways to deal with them.

Yes, new heroes are stronger. I see no need to nerf heroes over 1 ruleset for 1 tournament that shows up every couple months.

Man, do not explain people about this pain, they only see the name Kalo and tell you how to beat him. He is not a big threat until combine with mid Alfi and corner MN. How ever, with the repeat of top player defense and milking enough, ZG will surely bring another “Fresh Air” by offering new counter.

The Kalo/MN wings plus Alfrike tank is tough, but they are of little threat to actually killing you. I’ve been hit multiple times by Alfrike and not lost many times. You just have to endure. Throw in nasty flanks and those are the real problems IMO…Khufu, Malin, Ahmose, etc. When Kalo is firing off as both Malin and Khufu in one turn it’s game over.

Thanks for posting yellow teams. I only have one of the heroes in the top five team and three of the five in the bottom yellow team. Have Joon, Devona, Uraeus, Vavica, Malosi (no emblems), D’Andrea, G. Jackal, Mist, The yellow Slayer (not leveled up yet) but no yellow that does anything special.

Thanks for posting. Yeah I have survived a hit or two from Alfrike but three or four heroes with mindliess attack don’t activate and then Alfrike or Kalo attack with Dead Alfrike put mindless attack back on for a another three turns. So now 6 turns in now way to activate Specials and Khofu or other ends the match. I think I just don’t have the right heroes for 3.2 or other teams so will just go mono Yellow. Kill Alfrike with 3 tiles Ghost / Acitvate Kill Ma North and try to shut up Kalo with Gretel. I think that is as good as it gets for my attempts at theese teams.Could try C. Rigard, Proteus and 3 yellow but I don’t think the 3 yellow I have will kill anyone.

Oh yeah would love Miki and Frida but do not have either. I have what you call basic heros primarily from Season 1, 2, and 3 then ran out of money LOL. So I don’t think basic heroes stand much of a chance against these bombers. My favorite combo mainly as they are my best heroes is Heimdahl, Franz, Lady of the Lake. If I can activate this trio and kill Alfrike LoL minions have a good chance of keeping remaining heroes from activating. I still think the majority of battles will hinge on activating the right heroes before Alfrike goes off which only two or three turns in Rush.

I watch some of the videos and just drool over the heroes they use. Maybe SG/Zinga will give heroes away as the game grows long in the tooth?

Yeah I could see Taunt hero helping against Alfirike but sadly don’t have one except shrubbear. I dont think he would take more than two regular attacks from these heroes though. Do have Proteus, so proteus, Vavica, Devona, Malosi, Joon might be my best bet? But, throwing purple tiles to activate Proteus? Maybe better all yellow with Li Xiu or Grettel?? My best kinda bomb team is G. Falcon, C. Kahgan, and C. Colin. have Geffjon as sniper.

Mono in rush is suicide. You have to bring mana controllers: Proteus, Hansel, Gretel, Merlin, Peters, Tetukh(sp?) are all serviceable 4s that get the job done…plus 5s like Zocc, Hel, Miki, Bubbles, Kullervo, Alfrike, etc. another option is ailment block: Grazul, Cleopatra, Garnet, Emilio, etc for 5s. Even Faiez(sp?) as a 3 works really well. Cleansers and clerics/monks work well too to clean and/or resist her ailment. I’ll probably jinx myself, but I’m currently on a 15 hit OS streak in VF wars without a loss bringing counters like the above against mostly the standard Kalo-Ludwig-Alfrike-Khufu-MN setups.

Mono in rush is just massive Risk vs Reward but you have to 100% be able to charge the whole team in 6 tiles or it’s game over.

If you can charge everyone on 6 then it’s probably worth throwing the dice if you have a decent team for it.

Again, I know I have a strong roster and not everyone can do this but I’d consider this team for my 5th or 6th warhit when I’m just going for a Hail Mary 1 shot. If I get 6 yellow the game is over at the start….if not, well…better a quick death than a slow one 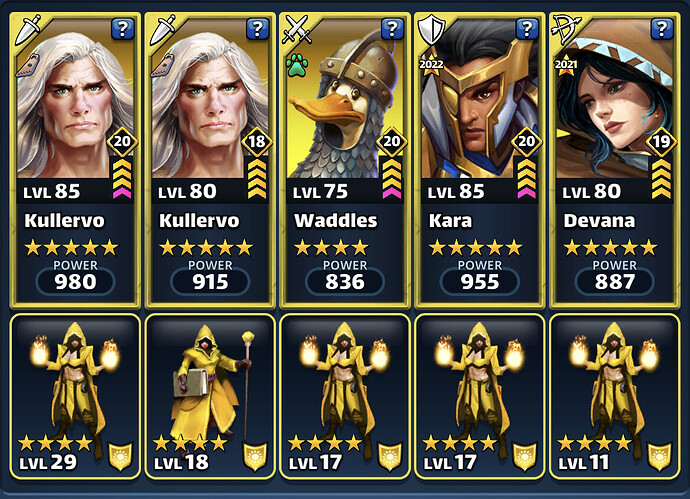 “no green” or “no purple” in rush would solve it.
But in this game history there was no “no purple” rush tournament on any star level.

We need to point the finger at the real problem…

It’s overpowered. It’s a 3 turn silence plus -100% mana most of the time… with damage

Absolutely not a true statement

Agreed!
It is like going into a gun fight with a butter knife! Lol!
But seriously, it is unfair odds and, needs to be adjusted.

Just watched some of the recommended You Tube videos on Team Building. What I learned is that I really don’t have the heroes for 3.2 teams that will kill a side or in my case three specials sometimes does not even kill some of the new monster heroes. Tried several 3.2 teams in Tournament this week and lost two or three of five every day. The new heroes are just two strong. I dont have any of the 5 star taunt options and 3 and 4 star heroes get destroyed way to easy. I do have a fair number of 5 stars and they are mostly the classics and can in no way match the power and deadliness of all the new minions and death stars out there. Most of the defensive teams in this weeks tournaments are composed entirely of heroes I do not have. My defense is getting and E as I do not have any of these new of deadly heroes. Oh to have a Miriam or Kofu or any of the myrid of new heroes, but alas they cost way too much to obtain. I will continue to play and mostly endjoy 4 and 5 star tournaments, but Wars and most of the 5 start tournaments I will just participate and whatever happens happens. In the end it is just a slot machine. And yes there can be strategy involved if you have the right hero selection to work with, but that is not I. THanks for posting the suggested You Tube video links. They are interesting watch and I can drool over the all of the heros to choose from. Heck there are so many new heroes I don’t even recognize half of them now.

Resurrection in this game is unbalanced in general. You come back without ailments, with your original max HP and whatever mana you had (at leas when it’s done by others, instead of a hero self reviving). The devs don’t care at all, except when it can be used by the player against the game, and so monster island does put a penalty for resurrection.

With that out of the way, Rush could work more like the magic night modifier. Heroes charge faster, but effects only last 1 turn. I’d still keep it at making speed very fast instead of the 50% mana generation bonus that magic night gives.

There’s actually a very simple solution to to this: if you put Alfrike anywhere in your team, you get to fight only Alfrike tanks. I’m assuming most players don’t enjoy fighting 25 Alfrike tanks (I definitely don’t), so this should help to significantly discourage putting Alfrike in your defense.

As for Kalo and MN… they’re only dangerous with certain tank+flank combos, and I don’t think there’s any fair solution to this short of outright banning them (which I’m strictly against).

Dont think mono is dangerous. I have gone 5 for 6 or 6 for 6 in my last six wars. All against 4800 plus teams. Usually go after a 4800 point team with my 6th war team. Just went 5 for 6 tonight and there was only one hero left on the team I did not clear. I think with smart tile play you can do mono very effectively. Main rule of thumb I use is do not cast any of the attack tream color unitl there is enough on the board to activate. Then when all looks grim make the match that will move the most tiles off the board and hope your color comes on board. I have dabbled with 3.2 and 4.1 attack Teams but never seem to win more that 3 or 4 in each war then. Keep migrating back to mono teams. Think the worst I have ever had was 4 out of 6 Flags for a War. Not sure what that means. I mainly use at least three of four fast heroes and have at least three mana Troops of each color at Level 11 plus. Seems to work. Most of my heroes are fast and attack only one enemy hero. Only have a few of the fast attach three heroes like Elkenan but he just doesn’t seem to do enough damage. The 3 hero combos that Mr. Spock used look deadly but they are only deadly if you have thoose heroes. Will make due with my classics and mono. Maybe someday in a few years Zynga will open the gates for easier access to 5 star heroes. Thanks all for your replies.

As for 3.2 in Rush it has not worked for me. I agree with the comment above that Rush is just a time for the slow and very slow mana heroes to shine. Regardless of the attack team you take if you don’t activate in about three of four turns it is lights out / game over with these new heroes.

Rush war is feast or famine, all about RNG. You can take the ‘perfect’ team but get no tiles. Take mono yellow and get hardly any tile matches. Take an off-color team and get heavy yellow starting board. Or, you can get a great board and wipe out the enemy in a few moves.

War takes a mindset - I want to win every match and help my team to victory, but RNG is gonna happen and some wars will be better than others. Personally, I strive to first get points equal to or better than what my team gives the enemy. Example - if my team is worth 60 and the average number of times they’ll defeat my time is 3, that’s 180 points. That’s my baseline for how many points to score in the war, for my own esteem, to “pull my weight.”

And then, make sure you’re in the right alli for whatever your mindset is. I mean, if you score 125 and they joke about your score - can you take it? If yes, and it’s good natured ribbing then great. If it’s mean spirited and feels like bullying, then find an alli that can encourage you and help you grow.

Life is too short, you should enjoy your alliance. And, if war is too frustrating, take a break and opt out for a while or forever.