Shouldn't hit all? [how Finley repeat attack works (ends on a miss)]

They all had buffs and Finley only hit her 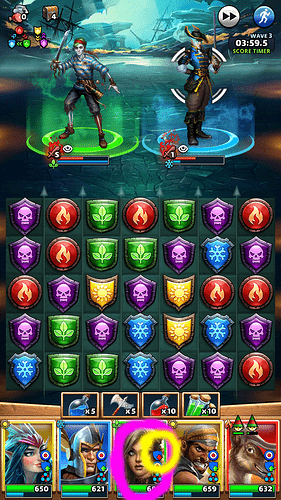 Finley has been blinded. Could that possibly be it?

I’t’s definitely due to blind. Finley must hit to add another strike.

You sure about that? Only thing the description says is that the enemy will get defense down if the hit is successful. Only requirement for hitting other enemies is if they have a buff.

If he doesn’t actually hits than the chain is broken.
Every hitted target gets the defense down.

Blind makes sense to me. He hit Belith, then he attempted another hit but missed. That’s why Belith only got the def- but no one else did, and thus his chain was broken, and his special ended.

This is a really neat discussion on the mechanics of Finley’s special. Now that we’re all pretty sure what happened, can we merge it into one of the discussions for Finley so people can find it easily? @zephyr1 @Rook @Kerridoc what do y’all think?

Now that we’re all pretty sure what happened, can we merge it into one of the discussions for Finley so people can find it easily? @zephyr1 @Rook @Kerridoc what do y’all think?

What actually is the most useful for mechanics like this in my opinion is to make a guide in #player-guides about the specific mechanic.

Here’s an example of one: [GUIDE] How does the Queen of Hearts’ Taunt work with AoE specials, or specials affecting nearby enemies in addition to the target?

Sure enough, finley stops hitting. Even though the description doesn’t say that’s how it should operate.

Is this intended or a bug?

Our closest comparison here is Misandra, as I’d argue that their abilities should behave universally similar in regards to how they hit multiple enemies.

So my question would be: does she stop hitting if she misses a chain strike?

From there, we can say whether it’s intended or not.

Though from a gameplay perspective, Finley is already quite a powerhouse

Misandra’s chain strike is based on chance though(both if a chain strike occurs and also the number of hits up to 4), not if enemies have buffs applied.

I’ve seen misandra miss more than once as part of her chain strike myself. Don’t have vid of it tho.

Hmm, you’re right… her’s has an activation chance, whereas Finley’s activation is based on a different condition.

Not sure if it’s a bug then. It seems quite intentional to me though, just thinking about the way the ability works… the game must be checking to see if Finley did damage, and if he did, seek another target that hasn’t been hit yet with buffs (or a random one without buffs). Key here being though that the game is checking to see if he did damage.

No mention of a missed hit stopping the chain though. If this is intended, then what other specials have or will have these kind of quirks that aren’t documented?

Hmm really odd…possibly a bug that might have been fixed now. I even had Boomer resurrect as a Zombie when I first faced him in the event and Marie was not even there. I tried again to try to film it but unfortunately it seemed it was a one off.

Dealing damage to the target is the cause, targetting another is the effect.
He have to deal damage (be it reduced or not) to attack another target…

The special is to read as it follows:

Another possibility is the “Hits each target only once” part. What happens to his special if his new target has been hit already? Say this sequence:

In this sequence, the special would fizzle with Belith as the only hero to get hit, right?

It’s all a bunch of supposition at this point.

@Petri any chance for some clarification?

I just thought of something else. The second part of the special says “If the target has buffs, targets another enemy.” We’re all assuming the original target is excluded in the selection of the second target, but what if its not?
Perhaps Belith was the second target and the special ended because she had already been hit.

@Petri any way you can clarify this for us?

The way I see it, the blind could have been a factor for Finlay not hitting. From the description, it says that generally, it should chain between multiple buffed enemies. My best guess at what happened that the next strike the blind kicked in and broke it. Otherwise it should have hit everybody.