Should I max another blue hero that has Def down?

I already have Costume Frank maxed. He’s my only Epicmaxed ice hero. However today i have pulled grim’s costume . Stats wise hes an upgrade to his classic version, the only drawback is that he doesnt add anything new to my roster. But he’s a monster and really useful to stack blue.

What do you think? Is he worth it? I have just one compass so i could go with another color and max something more tactical like Li Xiu or Anastasia or even a healer(i would have loved to get c.Kiril BTW), though i’m not struggling in survavility, just need big explosions haha . My rigard, Boldtusk and Grevle keep most of my heroes alive.

Costume Grimm is great, I will level him before the other two but as you said you need to know what do you need on your roster and focus on it

Long term, you should probably do Grimm (and costume). Short term, Frank will serve and there’s not a huge push to get Grimm. If Compasses/gloves are still a choke point, you will want some of every color before doubling up an effect in blue.

It looks like you’re relatively new so even if you don’t immediately level Grimm, you’ll want to in the long run.

Grimm has faster mana and a higher attack value so I find I use Grimm more than frank. I only use costume frank.

Long term things like mythic titan will incentivize depth and I use my Grimm, frank, Isarnia, and costume Gunnar.

yeah, im just level 29, so im starting to develope my epic heroes. I made to do my first rainbow team -Rigard-Griffin-BT-Frank and Marcel. And im building my second one.

I want to know if grimm is better than frank (both with costume bonus) in offensive. Lets say quest, hard levels and raids / wars. If he works better i will level up him happily

If I could only have one it would prob be Grimm for mana speed.

I switch my def down since last month as I get Frank CB and put some emblems (because Frank is better defdown over Grimm), but then cGrimm in my case is also not bad attack stat plus he give more +att to nearbly, so my current red titan teams now are: 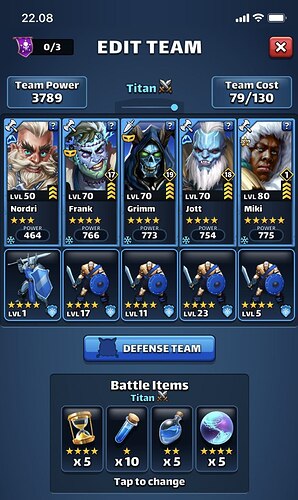 Li Xiu or Anastasia or even a healer

I’m not interest and deeep into that, but anastesia seems more fun on offense, Li Xiu can be annoying on defense though.

Have 2 copy’s of c. grimm def worth maxing… either version can help a team out…
Also be handy for you in trials as can use barbarian or rouge version when they come around.

C. Grimm then.
You can still pair him with Frank for def debuff and then hit hard with C. Grimm plus his 6 turns +50% attack for him and his flanks.

Also… With costume bonus you will find out that you’ll need a much lower (lev. 11) mana troop to access uncostumed Grimm def debuff with “only” 9 tiles.
And, boy, does that make a difference.

I took this team as my 2nd blue

And smashed this team to bits: 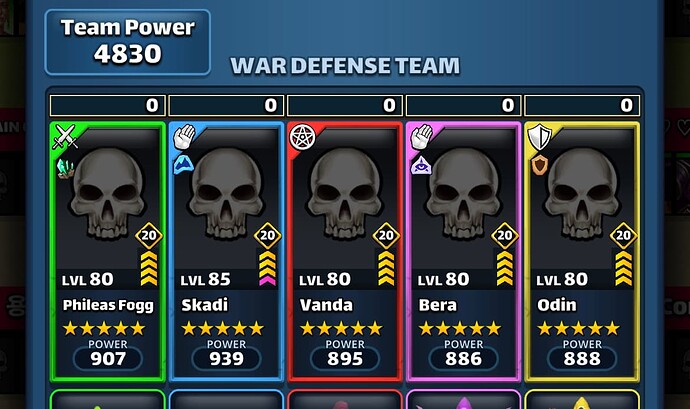 C.Grimm fired, gave Thorne and Richard a massive attack boost and they took out 3 heroes between them and put a 4th under half for Fenrir to gobble up.

Thorne and Richard aren’t especially loved 5* but when you give them that kind of attack boost they put out serious damage.

Grimms costume is a seriously impressive piece of kit, you’ll have a lot of fun with it

And what do you say about maxing my first 5 star hero? Yes, i know and i understand that building epics is more important and easier, however i find myself lacking good purples , just an emblemed Maeve and a maxed Rigard and find that Hannah at 3.50 is being used in most of the teams that i need purple.

Regarding the mats i just need one Tabard more so next month could be the right time to do it.

Grimms costume is a seriously impressive piece of kit, you’ll have a lot of fun with it

Thanks ! I will certainly max him as my next blue hero