Sgg needs you to spend this month

I don’t know what this thread is about, but I will go to the movies, buy nachos and coke, somebody else will buy diamonds or coins and will pull heroes. What’s the difference? Both of us will spend their money on entertainment.

Somehow, I don’t see you spending $1000 on nachos and coke… I know exactly what this thread is about. And I’ll share. It’s about limitless greed turning a great game into a payed for tower of madness. It’s about services offered at insanely overrated prices. It’s about gambling for children. Should hang a wall sign above the entrance. Enter at your own risk.

There are other entertainments you can spend money on, much more money than 1000$. The movies, nachos and coke is one of the cheapest.
You can spent 1000$ on a very expensive dress or a bag… Do you really need such an expensive dress?
If people are willing to spend their money on new heroes SG won’t stop them for sure. There is no point in talking about the same thing over and over again in 567 thread.

There is no point in talking about the same thing over and over again in 567 thread.

I think there is. Perhaps this 567th thread will open some poor shmuck’s eyes and save them a lot of trouble. Or maybe the 568’th… these threads will always have more meaning than those on “should Lepiota’s special be resisted by clerics or not”… thing is we’re all grownups (most of us) playing with dolls (me included)… and paying hard cash for it (not me)…

This thread will go the same direction they always do.

Let’s recap the player groups and how this will go……

Those that have disposable cash and spend it on the game will continue to do so if they wish to.

Those that have disposable cash but don’t spend it on this will continue to that.

Those that don’t have disposable cash and spend money they shouldn’t will continue to regret life choices.

Those that don’t have disposable income and don’t spend on this will continue to be envious of the heroes all of the above get.

Any of the above can stop playing if they wanted and at some point when the servers are switched off we will all have to anyway.

Life will carry on and all of the above will find a new distraction to waste time and /or money on. Such is life.

Ian487 maybe it will, maybe it won’t. I, for one, am extremely tired of these threads in the vein of ‘greedy SG/poor players’. SG doesnt differ from other games amnd players aren’t helpless children who are being tossed about by mighty SG waves that they can’t resist.

SG is providing an excellent product - imo - and i am happy to spend money on it. You disagree with what I’m doing? FINE! I disagree with your post, but love your avatar. Peace…

Disagreements might have productive outcomes. Just as you disagree with my point of view, I disagree with SG’s methods. And that’s regardless of the fact that I don’t like the game’s general direction since Telluria… It’s one thing to create payed for entertainment, wich I’m tottaly fine with, like buying a console game or paying for streaming platfomes, or going to the movies and having nachos & coke, but turning a video game into an undercover casino is just… perverted… and that’s not only about this SG game, it’s about all this trend of dropping the quallity of a video game in favor or micro transactions or loot boxes or whatever else they might come up with in this direction. If at least they had the decency to rate it mature, 18+, and it would have been a step in the right direction. But this actually lets kids gamble away real money on a spinning wheel… how on earth could this be fine in anyone’s book… that’s only one aspect of what went wrong here… one out of many… too many, unfortunatelly…

That´s crazy when you think about it!

I guess the biggest difference is, that when you purchase the ticket to see a movie, you are guaranteed to see that movie. If the screen at the theater isn´t working, you get a refund and come back another day too, even. Things you know you are going to get when you pay for them vs. this gambling game.

On another serious note:

It’s about gambling for children.

This is very sad to think about.

Because it is so true. I try to teach my son about these gacha gaming methods. But I can see that the eagerness to summon / or what else these games require one to do, to feel that adrenaline rush - is very hard to grasp for the young souls. Hope prevails and it is so powerful. (Just for the record, he doesn´t actively play any of these types of games. (He doesn´t even know I play.) He is only using their art work to get inspiration for his drawings of fantasy warriors etc.

But yes it´s not exclusive to SG and EP to have these methods - it´s everywhere in the world. Low-hanging fruit and what not, with these “F2P” games.

Ian487, i agree with you on one point: the game should be rated 18, but that’s not SG’s problem. The law says this game can be played at 13 year olds and that’s it. I think it shouldnt, but i also don’t think it’s a big deal cause this game doesnt really appeal to early teens: it’s just not flashy enough. Also consider that kids copy their parents. I dont think for a second that this game resembles an underground casino. Games like ‘Raid’ and many more are flashier and have an equally high number of microtransactions… Tkis is a fairly old fashioned game. Yes, it has changed with more heroes etc - and i like it. I dont want to go back to the days when Atlantis plus one challenge event were the highlights of the month!

The app store offers a huge number of games - we can all find one that fits us perfectly. I have found one and it is this one. Yes, there are are a few minor things that i dont like, but they don’t matter. So i stick with this one, have played it for 3 1/2 years. And somehow i think so do you. 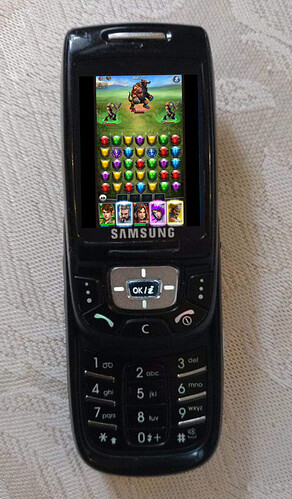 The road to hell is paved with good intentions… on a much larger scale, Hiroshima and Nagasaki were not Oppenheimer’s problem… still, somehow I doubt he ever slept with a clear conscience after august '45. Because it was his moral responsability. Of course, SG’s creation isn’t meant for mass murder, stil, it’s their moral responsability…

People can do what they wish with their money, obviously the rush of deals is a turn off for some… Everyone has a personal tipping point but really it should never get to that point. You should constantly be valuing the entertainment value for the money you spend and alternative options, if you are not, then you are likely paying more for entertainment that is less enjoyable. Yeah we all like something new, there are many new experiences my entire family could get for less than a specific 5* hero.

Just always evaluate and make the decision to change when it is logical, don’t wait until you are overwhelmed or frustrated by the game.

How do you play with this phone? Keypad?

Yeah… imagine that… a game actually governed by a combo of knowledge, skill and luck, not by the ammount of cash invested… unfortunatelly, that’s not the case here…

Im surprised they dont sell merchandise. Some of the art in this game can be sold on t-shirts, masks, and faceshields. Since everybody is getting sick again.

Yeah the only mobile game I recall seeing merchandise for is angry birds… But if they don’t want to do it themselves why not license their brands?

Well, no matter what SG does, whiners will whine and babyrage