SG done did it again!

My beef is that Zynga/SGG didn’t bother to announce the postponement. Nothing formal to this date.

They merely issued the official November 2022 calendar. Without any preamble.

IMO this is a very valid complaint indeed. Some proactiveness from SG would have been appreciated

SE once every 3 months (they did not state 12 weeks) does not fit evenly into that cadence. It would be once every three or four cadences (3@3 plus 1@4).

Looking at the calendar and the cadence, SE should be week of Nov 7 if in this cadence. As I recall the previous ones were at the end of the month. Postponed one cadence makes it Dec 5-7.

Was it ever officially announced the next one was in November or was that just assumed?

Yep… What I’ve been saying…

For me SE in December is great.
I have 36 EHT waiting for X-mas summon!

Let’s work on 3 months then.

Each calendar month is taken to be 30 days generally, for ease of computation.

Deducting the grace of 7 days from 2nd SE, isn’t that still 93 days?

Unless a calendar month is taken to be 31 days each, and this is not conventional, isn’t that more than 3 months ?

Do you now agree that this deferring of the (player) expected SE in November to December is more of a postponement rather than within their official line of “once every 3 months” ?

May be used to it and choose to participate — but still appreciate proper foreplay.

my partner appreciates proper foreplay too

sorry, just teasing, I get what you mean - forewarning

SE also occurs in Week One of their cycle so if not Dec 5 then it’s Nov 7 which is less than 90 days. Three 4-week cycles is not 90 days, it’s 84 days. So the two cycles, one week-based and one month-based, will never line up properly.

They did state as I recall 4 times a year for SE, and going every 4 weeks would mean five every other year.

I don’t necessarily agree with the reasoning here, I am just stating the facts as I see them. And did they ever specifically say SE was in November?

Either way, with the drop off I have been seeing in TC20 I won’t have enough dupes even by December to do more than a 10-hero exchange … AGAIN … so I will probably be skipping this … AGAIN …

SE also occurs in Week One

Week one of the game’s 4 week calendar cycle so whenever Atlantis happens, which will be December 12th, and not 5th.

I checked my game diary.

VF marks the start of a new 28 day pov cycle.

Unless Zynga/SGG has changed their minds about the order of events (again), the earliest is 12 December if SE is to coincide with AR (as was the case for the last 2 SE)

Zynga/SGG has already released the November calendar and confirmed that there will be no SE in November. Unless they change their minds (again) ?

If November SE was not postponed, then the order would have been :

That extra SE you refer to would only occur in 2023.

If you scroll up and read my post, my beef was on their non-communication of the postponement, and that it necessitated extra effort by a Forum volunteer to get Zynga/SGG to even confirm that there was no SE in November and that it will be in December, with no commitment on date.

Ah, I must have miscounted a week somewhere.

My point is, if it was only assumed it was in November and never confirmed then, was it a postponement? The issue, as always, is SG non-communication, period. (and obtuse meaning when they actually do - like does 3 months mean exactly that or 12 weeks – 4 times a year or 4-1/2 times a year?)

Whether the extra SE occured in 2022 or 2023 it would occur (and again in 2024/5). I’m sure many players would welcome it if it did. From what happened here I would assume SG/Zynga would not. So 3 months must mean exactly that.

With FS going live, I figured that Zynga/SGG would take back some freebies. An easy freebie would be to reduce frequency of SE to be affected.

When there was no SE in the November calendar, I didn’t raise a fuss about its absence. I only raised the issue of communication.

They stated : once every 3 months.

And 3 months from 22 August, say 93 days at most => 22 November at best. Unless Zynga/SGG’s definition of “month” is whatever they deem it to be.

Since it’s not in the November calendar, it would have been business civility to confirm a change in the expected order of events, with the new order of events.

And this is still my point.

I have no problem with no SE in November. I have stuff to work on. I have enough roster space. And yes, I have 20 dupes to release if there’s a worthy candidate. And I started working on the next 20 dupes.

Good for you that you now have at least 30 days more to collect more dupes, since the earliest for the next SE is 1 December.

In case you are still not convinced why players assumed November would have SE: 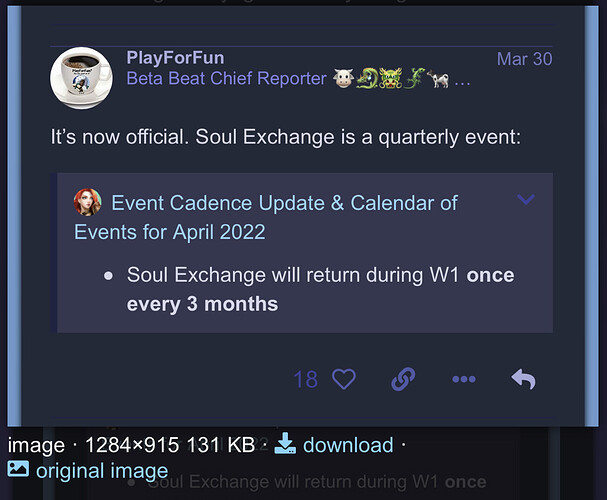 We’re making changes to the game’s event cadence! To incorporate new exciting events such as War of the Three Kingdoms, the Soul Exchange, and Season V into our regular programming, the current 28-day cycle of events will be replaced with a new one from 2022-04-21T07:00:00Z (UTC) onwards. The new cadence will not be too different from the one we have now — the most significant departure from the status quo is that Mythic Titans will now be visiting us every other month, not every month. Genera…

Announced that it’s back to November, check the main announcement topic

Nah. Zynga/SGG had a rethink and decided to squeeze SE back into November. Right between Covenant Portal (last week) and the upcoming Black Friday portal (22 Nov).

There was a fair bit of discussion in this. In the master thread.

Not sure if that’s been noticed/raised already but seems pretty obvious to me looking at it??

Thanks! I look forward to the discussions when the offerings come out. Just as much fun to read what the forums think as it is to ponder the choice (or not to choose) myself!

I think the character is Charon, @BlackZed

Yes this. It’s the same character so that would make the Soul Exchange work “themically” whilst Tower of Styx was on.