Ok, I rechecked and I know what’s wrong. I think SGG messed up again just like they did for Cao Cao release (bug report). They changed the event’s date but forgot to update the hero’s release date so the hero is still hidden in the portal.

Edelaide and Meadow are supposed to be in this portal but their release date is still set to a later date (which was the first planned date for this summon portal) so again, they are still hidden. On the other hand, SGG didn’t forget to update the new Monster Hunter 5* heroes’ release date.

For anyone who wanted to pull for those two at least, I can tell they should be included (again but working this time as it’ll be past their release date) in the next Covenant portal.

Ok, it’s just for the start of October so I will start teasing featured heroes for next month I guess

With the data I have at hand, for the 6th of October CF1, should be featured:

And I checked her release date, Anne should indeed be coming in the portal on the 6th of October. But I do not see her as featured. Just like in the Legends summon, the featured heroes only rotate among the HOTM’s costumes and the other heroes are never featured even though new old-enough HOTMs keep coming in.

5* bring in more revenue. Oversight on 3/4* is not surprising.

does anyone have the quick reference image for the month? just trying to remember what the “deals” for the covenant/monster hunters portals were.

Day 1 and 3 were the same offers the last time

Well, your statement is definitely true but on the other hand, free coin (when available) or earned-in-game gems pulls are a minuscule part compared to the total amount of summons. Not sure that the portal before the quest makes a difference. Spenders gonna spend and those who don’t won’t either.

@Elioty33 any idea when the Halloween event starts? 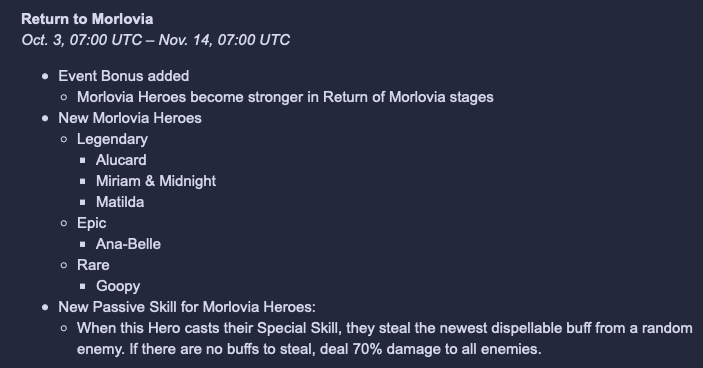 Last Sunday of the month and here comes my October calendar:

Thank you @Elioty33 very much appreciated

Thank you very much to our oracle @Elioty33 for the predictions, almost a week before October. Nice to see all the events listed in chronological order as well.

Good luck on your September/October pulls, everyone!

Thank you mighty oracle for the October predictions

Ps: @Elioty33 I hope some 4 star costumes will be included in the Costume portal after V52’s release on 17th October

How appropriate to fall on this date

I will check again after the update as things might change (like the upcoming dune event featured heroes) and indeed, the introduction of more 4* C2 would be awesome

Great for Halloween but also great if you wanna do your costume pulls on November 1st for the new HOTM.

Thank you! Good to know what’s coming up so

looks like a light month for me! nothing really interests me in the covenant portal this time, i might try in the super elemental portal tho. and the halloween event extends into november too, yes?