What an insane admission on Xnol. “We will nerf good heroes to force you to buy the new crappier heroes.”

Welcome to the cycle of “your hero is only good until it becomes apparent they’re good enough that you don’t need to give us more money.”

People should be leaving in droves. 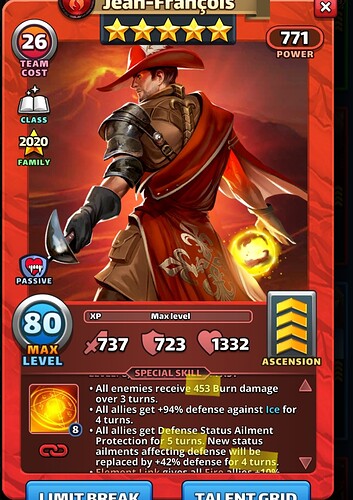 @Petri I normally don’t tag you, but as you can see the damage is too low, and there’s a contradictory 4 vs 5 turns

“If your hero is good enough that you’re satisfied, we will nerf him until you spend again.”

The season 5 metrics is mainly driven by the dollars not game stats. Once s6 starts the nerfs will come.

and there were 552 damages over 3 turns in SG information, so something went wrong.

For a bit of context: back in June , we gave significant buffs to the Sun, Moon, and Kingdom Families because they were not being used much at all back then despite being the newest kids on the block. That balance update was quite successful, as it managed to help them see more action without making any of them overly oppressive. A lot can change in three months in a game that receives constant updates, however, and it now seems that we had overshot by a bit back then in regard to the Kingdom Family.

Sigh… In your balance updates you really need to seriously consider two things:

You basically made all those buff & nerfs decisions too fast after the release, before you even let the players have enough time to pull, max, try and play with these heroes. So sorry but now these “we don’t know how it happened” really don’t sound too well. Shame on you.

I won’t comment on the Kingdom Family changes specifically and the heroes - I completely ignore their existence in the game; I can’t remember these names, these faces and I really don’t enjoy minions which seems to be the core of this family.

As for Xnolphod nerf, it should have come months ago to be able to defend it. Now what I see is “all those new purple tanks do not sell too well because everyone is still using Xnolphod”. Somehow him being too powerful wasn’t bothering you when he was the face of the ‘new kids on the block’ offers, despite players telling you so for months.

Neith - fine, though nothing groundbreaking. I don’t think she was top on the list of heroes who needed a buff, but happy for her.

JF - very good buff for long forgotten hero. All the old DoT heroes should get some love - JF wasn’t really the worst of them, but well, happy for him. Too bad there are so many good red heroes these days I hardly see him back to my deck.

Thoth-Amun - he’s now better than many newer HotMs with the family changes and now this significant damage buff. But well, he still looks like a joke when you place him next to heroes like C Guardian Panther or Bastet, so I guess that’s fine.

Salmon Loki - I liked this hero after his last buff already, and I think people still make fun of him as they got used to do that after terrible stats on launch. I don’t think many actually have or faced Salmon Loki, but I got obliterated by him as if my best heroes were nothing. This buff was unnecessary and I think was done under pressure that wasn’t exactly rational.

My xnol… is severely injured. He made my slow heroes usable again. He made the ninja and magic tower tolerable… he made farming easier… this… this is not cool.

NEVER NERF ! You release new heroes almost daily that could counter current meta. This is Bait and Switch, not even heroes like Xnol are safe after being out some time. Shame on you

Nope @BlackZed Xnol is no longer helpful on offence.
I play mono raids and my 9 tile mono purple was just broken. I consists of Xnol, Malicna (already heavy nerfed), Alfrike and two others. Until now I was able to charge Alfrike in 9 tiles + 1 turn (l. 17 mana troop). After current nerf Alfrike don’t charge fully after Xnol and 4 turns of Malicna mana buff.

Sorry to hear this. You need stronger troops. Magic/Styx troops at 30 for faster activation.

We are entering the state of uncertainty now. It is useless to get meta hero now, as they can change it anytime they like. And stop asking them buff this or that, complain this or that. As other games, they are good heroea and bad heroes. It is normal. Egg u say nerf khufu , they will release new hero who can counter him. Just stop this uncertainty circumstances.

Nerfing Xnolphod was a bunch of crap. Quit ruining heroes after their release. Put more forethought in the process before their release. SGG, you suck!

Unpopular opinion: the Xnolphod nerf is warranted, not just because of PvP omnipresence, but because a couple Xnolphods allow you to skip gameplay of competitive PvE modes entirely, such as ninja tower etc.

He was a game-warping crutch, much like Ludwig is to a similar extent, and introduces a way to bypass what tiny sliver of skill expression this game has left.

Lets start with information, that Xnolphod is my only “premium” hero of E&P. Was… actually. So my opinion might be in some negative emotions… sorry for that to all.
Nerf took part of special, what made him unique… I can live with that, I will be using him as tank for next war, next one etc. After this nerf, he will be adding mana in ammount of cca 1tile to average heres, 0.8 tile to fast heroes, even less to very fast ones… And what made him excellent, making slow heres faster is gone, they will get cca 1.2 tiles. All this mana add is like for a one turn. Lets compare it to costume Ariel. She add moderate ammount of mana, what I suppose is about equal of 1 mana tile per turn… but for many turns of course… Her mana effect might be considered superior to Xnolphod right now. Her healing ability is superior as well… Will Ariel be the next one to be nerfed? Go aheead SG… i dont have her… Same comparation to Toxicandra… she has better mana effect now and similar healing effect (not the same, but fast vs averege speed makes it very similar). Are you going to nerf her as well? Again, go ahead, dont have her… You ruled mana gain to be the key to success of this game…
Just last question to SG staff… Are you going to buff him again when players will stop using him?

Yeah, and people have to, I guess match more tiles and not rely on xnolphod to pull the entire team?

Only for people who spend lots of money. For us lowly f2p people who were lucky enough to pull him, he was just helping us get through the game.

Oh to add to my previous comment: this won’t actually hurt w3k defense teams. I just fought one and it was the same cancer as before. Whether they heal 6% or 10% or whatever doesn’t matter. They still heal and gain mana non stop while doing absurd amounts of damage AND counter-attacking.

I also tried my xnolphod-ludwig attack team and Ludwig is no longer fully charged by xnolphod in 9 tiles so that’s a huge nerf making that combo useless. They should’ve kept the mana boost on offense. Now Ludwig is useless in war offenses as you still need 12 tiles and with today’s meta who the heck has time for that???

Also again: no nerf to Khufu or S5 bonuses/passives lol.

And Nelth effectively fast speed -20% mana to all… Wtf are you smoking SG? I predict Nelth defenses everywhere causing grief and (justified) complaining within days.

The issue is that it ruins competitive integrity, regardless how much you personally spend.
He’s still a good hero, for what it’s worth.

On a related note, another unpopular opinion: #buffnotnerf isn’t feasible, and is hypocritical to promote if you complain about power creep.

Only ever buffing heroes will result in more Khufus because the power level will rise inevitably, and bringing the overpowered ones back in line is much more feasible long term than buffing literally everything else to their level.