I’ve been attacked 24 times in the tournament and it’s been going for a few hours. If we all get 5 attacks then shouldn’t that average 5 attacks a day?

How may times have you been attacked? 24

What grade does your defense team have? B

What is your defense team?

I have 4 attacks some only 1. Yes I thing there should be some limit for attacks per day.

I would be curious to hear how other defense teams are doing. I’m 9/19 right now.

I’ve been attacked 3 times to now. One win, two losses. D. (But won all of my attacks, so still pretty happy…)

I’ve been attacked 3 times to now. One win, two losses.

Same for me. wineybrit and hermann are getting all the love

I’m now 10/20 which gives me a grade of B. I’m guessing with such an offensive adjustment most people are going to win and a defense team that can hold it’s ground 50% of the time will score highly.

What grade do you have @Hermann? I would assume A

I would also be curious as to your defense team power and setup. I know a lot of people were planning on running intentionally weak defense teams. I went with what I thought was my strongest option

I wonder if the top defenses will get the most attacks.

Also interesting to look at the teams attacking you. All of mine are maxed 3* mostly with lots of emblems

My defense is at 15 total attacks, with 5 loses, grade A with 67%.
I failed one attack and won 4, the one i’ve failed was against a 2600 who was full of heroes with emblems. Mine are all without emblems. Not spending emblems on 3*.

@KnifeWonder, just curious what does your defensive team look like?

I’m kind of hoping for more defensive wins as the day goes on. I figure the best players are the most eager and committed and get their attacks in first.

16/26 as of now
The system is either broken or makes no sense when my alliance mates are reporting 0-3 attacks with similar TP Def as mine.

I agree. It also seems unfair that those with stronger defenses seem to be matched against stronger opponents and hence have more losses. Makes me want to field all Aifes

I was offered a defense team of 2123 for my first attack. This is now verging on territory of what may be better for a different post, but I have been offered higher team powers and more points for my second and third attacks (all of which I have won so far - have not used flags four or five).

I wonder if it could be that defenses that have performed well (won more than lost) so far are prioritized for more attacks on them to verify that they are in fact worthy of the good grade and not just a few bad boards for the opponents?

Here’s my team. Mnessy got one cuz I’m planning to also use him on Avalon. And yes, I power-fed Gunnar, just because I don’t have a single other paladin to level up lol: 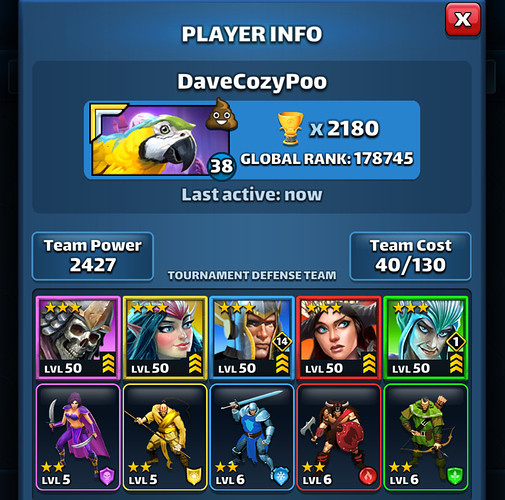 I only got attacked once. I did win, so defense grade A. From my own attacks I won 4 and lost 1…