The seasonal drop rate for this event is 0.6% for legendary event hero. I don’t remember the other drop rates for Easter, Summer or Christmas. Since there is only 1 5* event hero this time the 0.6% is for just him so I was wondering if it changes for other events. Easter I would imagine is the same since again there is only 1 5* so the Easter rates should be the same with only 1 of each (3,4,5).

Does anyone know the drop rates? Also since they are so infrequent, literally once a year, why are teh rates SO LOW. I know SG rates are low as it is but the event rates seem backwards (though I guess it works for them). I would think that the event rate would be higher than the rate for the standard S1 heroes but it isn’t. I know this makes it better for SG since you are far less likely to get the event heroes. In this case you are more than 2x more likely to get the HOTM than the event 5* (Victor). 1.3% vs 0.6% and you only get a 2 week chance at him once a year.
The same is true for Atlantis when the rates should give you better odds for S2 heroes but you are more likely to get S1 heroes. I know this is th main source of revenue but it seems like those odds are insanely low. It makes me wonder how much they really make since there are over 1 million daily players and I see quite a few with a lot of HOTM and event heroes.

I just wish they would give us a way to progress toward things instead of the hit or miss of the RNG. I get streaks of luck with loot then nothing. I would rather have a stream of parts to make a tonic or cape instead of going weeks with none then get 1 then nothing again. Same with heroes, how could it hurt to give players who have been playing a year maybe a token to pull a HOTM from a special portal that would guarantee a HOTM and then award them again at 18 mos. and 2 years, etc. It would keep players here and wouldn’t dilute the spending base at all since long term players tend to spend a little. Anyhow that’s OT and I really wanted to know about the extremely strange drop rates.

Fall and Spring make sense and I think I said that since they only have 1 of each 3,4,5. But Summer has 2 of each Arman, Hisan 3*, Gafar, Jabar 4* and Yunan, Rana 5* so that is 6 total. Christmas has a different amount with 1 3* Rudolph, 1 4* Buddy and 2 5* MN and Santa. I would think the odds would be different for those 2 events given the different number of heroes in each tier. Funny that those 2 events (Christmas and Summer) also have the better heroes…hmmm

Since there is only 1 5* event hero this time the 0.6% is for just him so I was wondering if it changes for other events.

It doesn’t, the Appearance Rates have been the same for each Seasonal Event, regardless of how many heroes there are.

As an example, here’s last year’s Santa’s Challenge vs. this year’s Return to Morlovia: 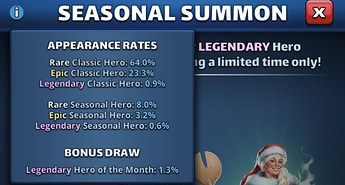 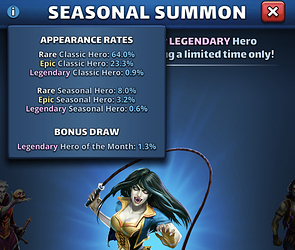 So I was just checking this out before I did any pulls, but it appears they lowered the rate of 5 star pulls for seasonal event by 1% overall. Anyone know why or if SNG made a mistake? 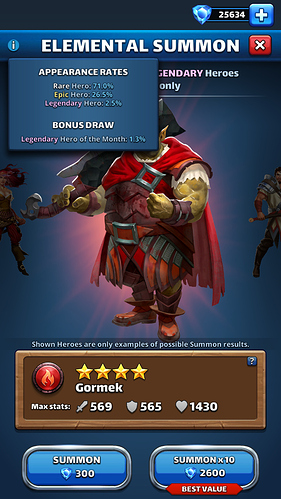 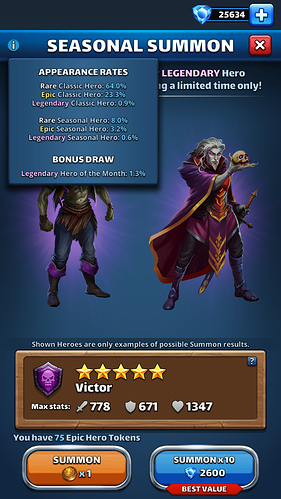 Welcome back to the Forum, @SilentKnight87!

Elemental Summons have always had a higher Appearance Rate for 5* heroes.

And Seasonal Summons effectively have the worst odds of any of the Summoning Portals, since the Seasonal 5* rate is only 0.6%.

These rates are unchanged, the past Seasonal Summons have had the same Appearance Rates.

@zephyr1 Imo, the seasonal heroes percentage needs to be bumped up a bit. Not Atlantis percentages but for rares, up to 35%, epics 25%, and Legendaries at 10% at most. I would like to think the ones with the bigger rosters (X-Mas and summer ones) would at least have the higher percentages.

The Halloween one, I am fine with only bumping it up a few points as there is only 3 of them. That is just my two gems about it.

I’ve actually even made the case before that the game could have been designed to give every player any Hero they wanted, and have just made Ascension Materials even rarer or leveling costs even higher to force choice on which heroes you wanted to level. That could have led to more strategy and less randomness.

@zephyr1 Same. At this point it is just wishful thinking.