Yet again my alliance fell victim to another much stronger alliance!
They took us all down in less than 1 hour!
The way alliances are assigned to us is a big F****** JOKE!
Most of them are 10k+ stronger than us!
We boycott that piece of 54!7 wars from NOW on!

And to the programmers… fix the allocation of opponents ASAP!!!

And to the other members in here, I don’t care about your opinions, I just want MODS & PROGRAMMERS take notice about this huge INJUSTICE!!! 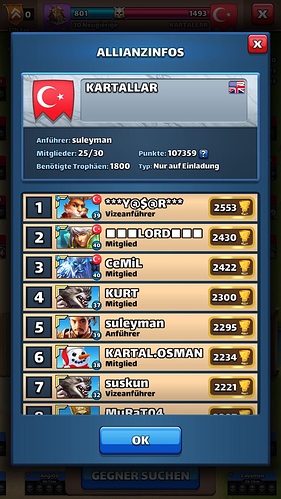 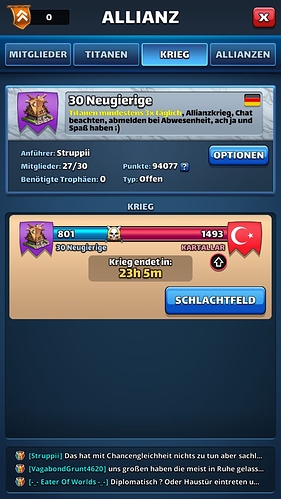 Looks pretty balanced to me, the war isn’t over, what do you mean they took you down? Get fighting.

They beat all our @sses within an hour!!!
This bull$hit isn’t balanced!
Keep fighting??? What for???
Are you high on drugs?!?
This war is actually over!
I think they‘re cheating somehow…

I agree with @Wad. Although alliance scores aren’t used in the algorithm anymore, it is a good indicator of matches. Your alliances are 13k apart - fairly normal for the matches I’ve seen.

It sounds like you got matched with a well-organized, alliance war machine. If they wiped the board in an hour, that likely means they did their research on your alliance, planned and then all got online at the same time to fight. That’s definitely discouraging but you can still fight back as they will run out of flags

Fortunately, the devs do have a plan to fix this. The full thread with dev responses can be found here:

It’s a loooonnngg thread. Feel free to spend a few hours reading, but the main point in there is we will be moving to an ELO-based matching system soon. Basically, if you win you fight an opponent higher on the ladder. If not, you move down and fight a weaker one. There’s more to it, but you get the idea

They only killed your defenses , get back there and attack yourself, it’s gonna be one sided if you don’t try.

Wait, are you saying if all your team is killed that is it, no more war, it is finished? If that is the case yeah they were well organized and got it done, congrats to them, now get your alliance to do the same to someone else.

We are ALWAYS over matched but by God we NEVER just hand them a victory. We fight and we die with dignity

we will be moving to an ELO-based matching system soon

We don’t give up easily, but that war is really discouraging for our weaker players.
And this time it’s just dumb to keep fighting against an opponent whose alliance points keep increasing…

The matchmaking system is a big f***ed up thing that needs to be changed!!!

I don’t disagree with you. Our members are only going through the motions becsuse we each rely on the others to participate.

It wouldn’t take much for the whole thing to fall apart.

Did you check out the forum for guides or helps? Each war ends after 24 hours and each member has 6 attacks. Nothing is over after 1 hour, you only let affect their lead your moral. (Just now we are 2000 points behind, but for sure it will end in a photo-finish)

Really… tell me something I don’t know by now!

Is there a possibility you can post something helpful, I don’t know!?
Stuff like… how can they beat all of us in an hour?
Or did they cheat in a way I don’t recognize yet…
This smart@ss link will not help me…

And to the others trying to help, we don’t get demoralized by such a thing… just pissed off badly!
We always fight until the end!!!

And since those so called mods / programmers are such lame garbage bags and not able to help a bit… screw this ■■■■ and close and the threat!

You said you know all and still you don’t realize how it’s possible to reset the opponent in less than an hour. You know all and directly whining and asking if they are cheating. Hold on yourself!

You wanna change something? Start with yourself and your behavior. Then read this: Yo Momma’s Alliance War Guide + Team Planner

After you read that and you have questions, feel free to ask in a polite and respectful way (or don’t read and shout how unfair everybody is to you and I will not waste my time with you again)

By the way: Now we are leading by 700 points, after our opponent reset us within the first hour.

I didn’t insult you, so there’s no need to change my behavior.

If you can’t stand the way I talk / write then I can’t help you.
And we opt out for the next war(s)…

Have a nice day

Why don’t you take the loss and learn from it? Change your teams around. Come up with a better strategy. Whining about losing makes you look like a sore loser. One thing you left out was how many of your team members not hit? Did you have 100% participation? Are your alliance members taking the time to strengthen all of their teams?

Honestly, if you were matched, it means that you are similar. They may have a better war strategy then you. I seem to always be in alliances where we are “weaker”, but we almost always win. We were 10k weaker in this last war and won by 90 points.

But it‘s still the way alliances are assigned to us, which annoys me!!!
There was hours the other alliance had more than 17k alliance points more than us…

And if there’s no one else with helpful advices, I recommend you to stop writing here!

The war is over and I keep looking forward to the next one!!

For the Alliance I am in, we are lucky if we can win twice in a month. The losses are usually not even close. From our perspective, the challenge is getting the defenses to align with the members who are able to participate in the war. Since to opt out occurs after the opponent selection, it is quite possible for mis-matches to occur. It is just the nature of the system.

If anything, it would be nice if a member could opt out on any day except the day of and be locked out of the next war. The obvious problem with that is an Alliance could purposely throw ever other war to guarantee A win.

Frustration is understandable. Personally, I haven’t seen the rewards for winning being good enough to be frustrated over the war system. The rewards for taking a Titan down has been better. I’ve even gotten better rewards from watching the videos.