Very good idea, the caster put a single target to dream mode. And if he hit again in 3 turns gives 100% damage to target.

This is an awesome idea +1
Wish I had a vote to give.
We could get into some LoveCraft, maybe Cthulhu or any other of the great old ones. Endless ideas really…

@PapaHeavy thank you! Yes there’s so much to play with

Ooh I like the idea of a Lovecraft-themed season.

Just how good would Cthulhu be!

Special= Demonic Chains
-Deals 300% damage to all enemies.
-Drains 400 hp from all enemies over 4 turns. This can’t be dispelled but ends if caster dies.
-Heals caster 50% of damage dealt
Nightmare Family Bonus stated above

How about something related with alien vs predator!
The hunter and the pray!

I’d like someone like mumra have to get his mana up to turn into the physco bag of bones! Then have another mana bar when his in that mode that sets off another special!

Or do something similar with gremlins!

I’ve been watching horror films since I was a child, most of them honestly made me laugh more than scream. But there was one in particular that kind of creeped me out. 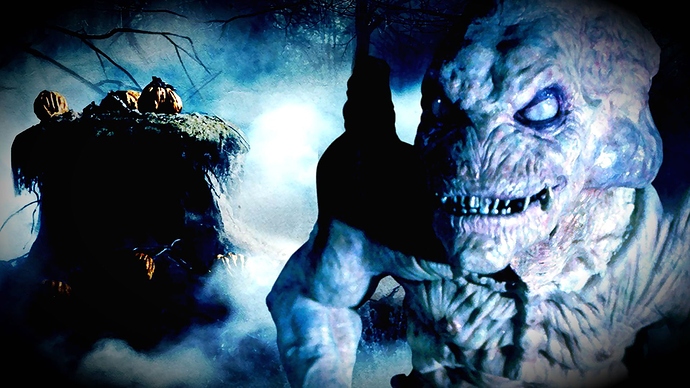 So I changed Jason to a barbarian and a Nature elemental due to the fact that he resides in a lake, this allowed me to created the Krampus and we’ve gotta get these to the devs

And if you’ll remember, Krampus could be killed by being stabbed with a stake made from the branch of an evergreen tree dipped in the blood of the dark side of God himself. Creepy much?

Halloween is my favorite holiday. I’d like to see some Halloween heros/monsters. Like a Headless Horseman holding a jack o lantern bomb that 50 percent damage 10 percent to allies and prevent mana increase for 3 turns. Or how about Oogie Boogie man with poison spider attack. Or water about sexy wolfwoman.

Love the idea of some Halloween monster based heroes

Maybe you’re newer to the game, but look for exploding jack-o-lanterns in Return to Morlovia!

Coming to a hand held screen near you!

That would be cool. I haven’t been here during a Halloween before

But that would not be the same as the Headless Horseman throwing one at you. Then again he also could throw his axe

There is usually a halloween event…