Scraping the bottom of the Boril - Ascension Advice

I have a conundrum - a reasonable pool of ascension materials and a few 4* heroes at 3^60.

Ascend or wait is the question.

I have a TC20 and 13 running daily. As a dogmatic f2p I will have saved for TWO pulls at the next Atlantis summon!

Here are my materials: 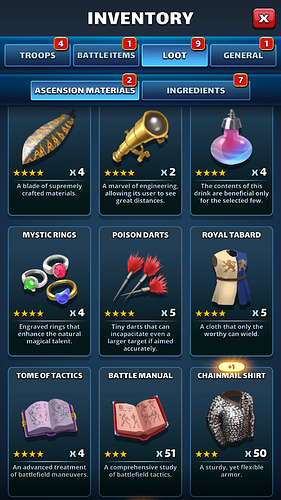 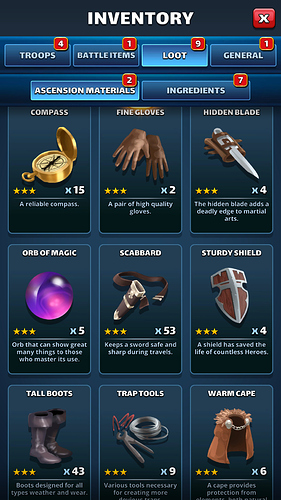 When I asked about Chao previously, I was impressed and surprised with all the love and ideas for him.

) doesn’t get much love here - but I use him a lot and definitely don’t begrudge him the ascension materials I used, although I have quite a few blues waiting…
I love using him as a tank in raids and war.

If I may ask, what were your reasons to keep two of skittlskull?

Alas, she’s still better than some of my lowest 3* for war…

My recommendation goes to …

Boril has a defensive rating better than about 1/3 of the 5*s in the game. Yes, he can be debuffed. But almost every hero can be countered by another in this game.

Skittleskull has one of the highest attack stats in his class (4* green) and can be a damage machine when paired with Wu…similar to Colen.

I see you have the same fine gloves issue as I. My philosophy is basically to ascend who is ready and next in line. I’d rather be feeding the final ascension levels for my 4* than saving for something that may never come. And if you do come across something sooner that you want to spend your mats on, it doesn’t take long to get 4 more orbs, shields, capes…
Just my 2 cents. Happy hunting!!

Ps my son has Chao maxed on his account and likes his fast, hard strike ability. So he’s good too.

Chao before Boril for sure. You don’t have a maxed 4* yellow. I also would focus more on heros better suited for Titans as that’s where you will have the best chance at ascension items. Raids it’s just cups and filling the raid chest. Boril has his niche, but you can use Chao in Defence, offensive, and Titans. Your materials are better spent with him.

Also, I have Skittle at 3/60 and that’s where he’s stayed for the last 8 months. With his slow mana speed he’s not good for much other than defence and there are way better 4* green heros to spend the shields on.

You have a nice collection of am but like me you are missing gloves.

Chao was my second 4* and I am very happy with him.
He is especially strong in end fights like 2 vs. 2 heroes where he can nullify the special attack of an opponent’s hero with his mana stealing ability.

Otherwise I find him very versatile so I recommend to lvl him up.

Boril is in my team to at 3/60.
He is quite strong in raiding defense and offense because of the stupid AI which kills itself against counterstrike.

Since I have only one pair of gloves right now I dont know if I am going to ascend him if I get the 2 missing capes. ( Even if I have no other 4* around right now. TC13 does not cooperate.

If you know you’re goin to do some summons in a couple weeks, I’d squat on the mats until then. And that’s usually advisable regardless of max choices. I’ve maxed a hero before and turned around a week or 2 later and summoned a hero I’d rather have maxed of the same color. Especially if you’re f2p and not buyin special mat offers or doing a good amount of summons

I agree with @ThatGuy. If you’re going to do a couple Atlantis pulls, wait until you see who you get. If nobody better comes along, max Chao

Yes and no imo. There are better heros to potentially summon in Atlantis, but then there are always better heros just around the corner. The fatal trap is to never max anyone while waiting.
As @Dawnsky suggests, Titans at higher levels are the best bet for regular AM drops, and more maxed heros will help lead you on that path.
That and Chao is pretty good anyway, so I’d say level him up and enjoy his efforts in you’re lineup

@JonahTheBard, I would do Chao right off, and Skittles second, as they are both useable all around, map, raids, titans, and defense. Boril is really only good for defense; other uses are questionable.

Waiting for other choices isn’t a bad idea, and you will get more gloves someday…of the 1-1 heroes, a second Rigard will be good in war if not too useful on offense, similarly Skittkes, while she isn’t a favorite, she is more early usable than Boril, especially the second one!