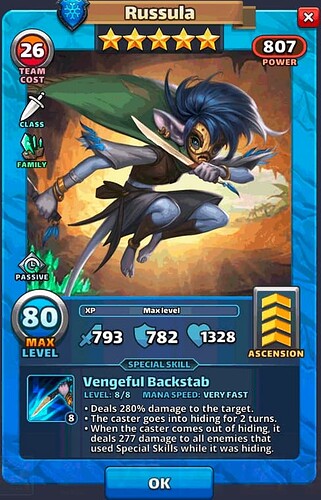 Underwild Gem deals 50 damage to a random enemy each turn.

Underwild Gems can only be spawned on a normal shield on board that has the same element as this Hero.

There appear to be no changes to Russula from last-seen Beta stats, skill, and design.

What do you think of Russula?

This thread is for thoughts and discussion on Russula.

Based on preferences Forum members have expressed, please try to stick mainly to Russula and not wander off topic too much to other heroes.

*NOTE: Summon Results posted without any commentary/feedback at all should be flagged as Off Topic and removed, based on preferences expressed by the Forum community. Please include some comments about what you think of Russula when posting Summon Results. In addition to opinions about Russula, you are also encouraged to include how many Summons it took before receiving Russula (or how many Summons you’ve done without receiving Russula), so other players are presented with realistic experiences of the rarity of Season 4 Heroes.

It’s important to remember that Season 4 Underwild Heroes have EXTREMELY low summoning odds. No amount of summoning will guarantee a Season 4 Hero.

Is Russula worth Summoning For?

How many copies of Russula would be useful to keep & Level?

What do you think Russula’s Primary Purpose is?

What do you think of Russula compared to other Heroes?

How does Russula’s Special Skill and Intended Purpose match her Base Stats?

Is Russula worth giving Rogue Emblems to?

In Defence, where do you think Russula is best used?

How do you think Russula is best used? 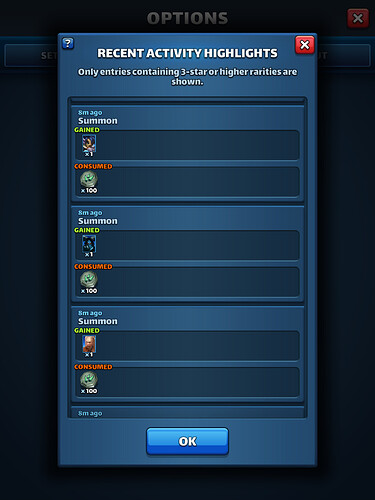 Looks to me at very fast really strong and very good. Emblemed he could be great.

Depends on what the hiding does. Can she charge mana while hiding? IIRC she takes 30% less damage, but forgot everything else. That being said, she’s the first blue 5* VF hero.

I would say she doesn’t charge mana in hiding.

Hi, tested this. She charges while in hiding. It’s not a ghost form type Special.

There appear to be no changes to Russula from last-seen Beta stats, skill, and design.

There are changes, reduced status effects when hidden was removed:
" * While hidden, the caster can’t recieve new status effects or stacks; all damage received is reduced by -30%."

“Hiding, immune to status effects and stacks. Received damage is reduced by -23%. (Undispellable)”

She is meant to counter the fast speed meta. Really good on offence and against any formation that’s not standard, since everyone gets to charge almost at the same speed

Ah thnx, was missing this.
Makes no sense that this aint part of desciption of hero

When something is reduced by - 30%, isn’t it actually increased? Double negatives?

I just pulled her. Very good stats but the special looks kinda meh to me. 280% dmg to one and improved defence for 3 turns. In comparison Guardian Jackal does 270% dmg plus elemental def down and he’s a 4 star.
The 300 damage if somebody fires his special is quite niche. If she’s combined with for example krampuses taunt that might work.

Is there something I’m missing here?

No, her ultimate is really weak. This hero is useless so far and needs a rework. It’s strange it passed beta

As much as i try to find any use for her, i dont see it anywhere tbh. Rogue class goes againts her purspose aswell, not gonna chase this hero for sure.

I got it Today! I made my little daughter do 3 pulls of which Justice, Vivica and Russula! I went crazy!

Are you ok? Read all of her staff…