This thread is for discussing strategy related to Russell, as well as your thoughts on him. 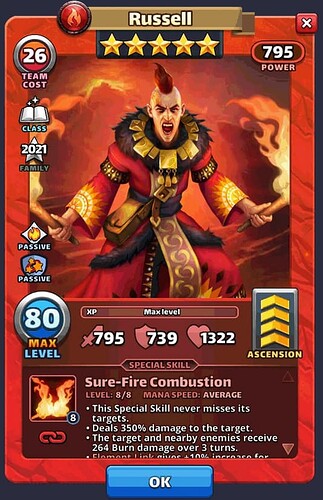 There appear to be no changes to Russell from last-seen Beta stats, skill, and design.

What do you think of Russell ?

This thread is for thoughts and discussion on Russell.

Based on preferences Forum members have expressed, please try to stick mainly to Russell and not wander off topic too much to other heroes.

*NOTE: Summon Results posted without any commentary/feedback at all should be flagged as Off Topic and removed, based on preferences expressed by the Forum community. Please include some comments about what you think of Russell when posting Summon Results. In addition to opinions about Russell, you are also encouraged to include how many Summons it took before receiving Russell (or how many Summons you’ve done without receiving Russell), so other players are presented with realistic experiences of the rarity of HOTM.

Is Russell worth Summoning For?

How many copies of Russell would be useful to keep & Level?
Note - this is roster space dependent & isn’t the same for everyone!

What do you think Russell’s Primary Purpose is?

What do you think of Russell compared to other Heroes?

How does Russell’s Special Skill and Intended Purpose match Russell’s Base Stats?

Is Russell worth giving Wizard Emblems to?

In Defence, where do you think Russell is best used?

How do you think Russell is best used?

This means that blinding him or Wukong´s buff miss chance doesn´t apply to him? Also dodge and evade are useless against him?

This means that blinding him or Wukong´s buff miss chance doesn´t apply to him? Also dodge and evade are useless against him?

As clarified in Beta the answer is yes to both. So neither Wu-kong, Neith, Justice, … nor Costumed Kadlined can make him to miss the target.

that is how I understand it. Else his damage is to small for average speed in my opinion.

i cannot wait to try for him!!

I don’t have any of the circus heros as I was on a spending pause last time they came, so ideally I’ll get him and the 3-4* from that event in a few days.

This hero could be great, but SG was deaf to the suggestions to buff his dmg.

Uraeus is average speed sniper with 485% hit bypassing minion + 345/3 DoT for all with minions.

Is the “never miss” a good trade off for far less damage - I don’t think so. Not to mention, Uraeus is hardly considered an A tier card…

By design a counter to C Kadilen, but by execution C Kadilen will laugh at him trying hard to kill a minion. Wasted concept, but then again - he’s a HotM, so beta’s opinions saying he’s too weak made SG say “oh then he is exactly as he should be, thanks guys!”.

Mana generation on burn is fun thing, but don’t let this fool you… unless you pair him with Emilio, that will not matter all that much.

His niche use is finishing a wounded Frigg with a certain hit, so you don’t have to suffer seeing Gefjon being dodged by 100 hp hero.

Probably a reason why starfall replaced wonderland. For people to pull for Emilio asap
Yeah, also I don’t think his other attributes like never missing his attack justifies the horrendous sniper damage. Dark lord used to be really terrible because his sniper damage is really bad. And he’s a fast sniper. DL used to be the worse, but the title now goes to Russel

I have a feeling that Russel’s artwork was drawn by the the same artist who did the slayers. And Russel was originally supposed to be aodhan. He has the look of a 4* hero tbh

At least Nemo has a conditional increase of his base damage. 350% is all you get from russel

Each burn instance charges him separately. So 5x5% in case of Emilio.

Russell’s skill has been circumvented by the Rogue class.

You tested him and the rogues still evaded?