Roster advice for completing legendary Wonder Land (and beyond)

I figure Rigard makes the most sense overall so I have a 2nd healer and a first healer when I can’t use Ariel in the 4 star only stuff. Scarlett looks nice as well with her attack down and all the green enemies. Grimm fits well with Ariel and Frida in a stack but I will already have defense down from Tiburtus plus I only have 4 capes.

Would really like to get the completion rewards from Legendary Wonder Land this time around so any advice / help would be appreciated!

Oh and I only have 1 fine glove so that’s what is holding me back from more ascending.

This event has a lot of green, some red and few purple enemies. Meaning you want mainly red, but if you can’t do red then blue is the second best color. 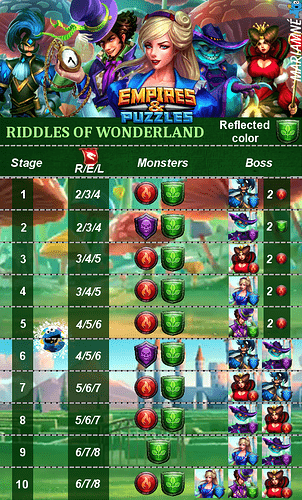 Given your choices and since you already have Ariel, I wouldn’t ascend Rigard for this event. He’ll be good to do eventually but 2 healers won’t give you much firepower.

Tile damage is king in these events as well, even if you just play to complete the events, not just for high scores. You want to use most of your items at the bosses, which means killing the enemies quickly is the safest way to not take too much damage on your way there.

With that knowledge; it’s between Scarlett or Grimm. I lean towards Scarlett, but since you have Frida with blue-element down, Grimm wouldn’t be a bad choice either.

I power leveled both Melendor snd Caedmon for Pirates!! I feel ya’

Since it is reflect green, sit your Caedmon !
If you just want to complete it, and not compete, i would bring Ariel and Rigard. ( i like to play safe and if i am not mistaken, Ariel’s buff can be stolen by the Hatter)
Grimm + Frida would be a great combo against red enemy and boss.
Scarlett can help with her -attack
And don’t forget items

well just pulled another fine glove off the titan so now I could do 2 out of the 3 if I really wanted. I do plan to spend my coins this atlantis portal and I have a few EHT saved up for the sand event so might be wise to hang onto the second fine glove but thought I’d bring it up.

I definitely just want completion, I don’t think there’s anyway my rag tag group could actually place well in legendary and probably not even epic tbh.

Stage 10 is the one to really be concerned about and the double healer (going with rigard) probably takes too long to kill the enemies before queen of hearts starts taunting and alice starts one shotting so I do think Scarlet and / or Grimm would probably be best.

How much HP do the bosses have in stage 10 anyway? Guess that would be a good thing to know lol.

A bit over 5k if I recall correctly

Note the complete and utter lack of yellow. I’d recommend bringing your best yellow hero, especially in levels with purple enemies. It will make getting through the goons much easier, and will help with Cheshire Cat.

My best yellow hero’s would be Melia 3/50^6, Bane 3/50^8, and Dawa 3/50^3, I tried to make Bane and Melia better with emblems but i don’t think it’s enough. I feel like they’d get destroyed in legendary mode so I didn’t consider them viable or worth posting.

Outside of Caedmon and Skittleskull (who aren’t really eligible for this one) this is basically my entire roster and I’ve never tried to complete legendary before which is why I’m asking for advice and if this roster could do it.

If only you had Proteus, last Wonderland I complete legendary with 2900TP team containing Proteus, he is the key.

Did you get Ariel without getting Proteus?

Yeah, I’ve heard he’s awesome and it’s easy to understand why, good DoT and no mana for 3 enemies when you just so happen to fight 3 enemies.

My luck on the Atlantis portal has been all over the place. When Ariel was featured I only had enough gems and coins to do a total of 3 pulls and got her with the 3rd one. I did 18 pulls on the one with Hel and GM and the best hero from that was scarlet, agwe, and 16 3 stars. I got Frida off a single token so in my short time playing I’ve basically experienced the high’s and lows of the portal lol. I’m C2P but spent the 8 flasks I saved up all on atlantis rises to complete normal and a bit of hard to do those pulls.

I saved my gems forever and did a 10 pull on knights of avalon and got Rigard and Caedmon, the rest 3 stars. That pretty much explains how I acquired my roster. I was really hoping for Proteus and Wilbur but no luck there.

Anyway, I don’t have any mana control hero’s which makes things tougher!

What do you guys think are ideal items to go with? I can craft anything up to dragon banners but I think I will try to push my best forge 2 more levels to craft dragon attacks. If keyz is right and the bosses have a bit over 5k hp on stage 10, 5 dragon attacks, 5 bombs, and 5 axes should do 4,500 damage, is that the best way to go?

Time stops would be great but I only have 1 and can’t craft them yet. Same goes for the biggest mana pot and the biggest healing pot, 2 miracle scrolls and 2 tornado’s but otherwise I have loads of everything else.