I fed mine to Hamitra just now. Space is at a premium. Doubt they’ll buff him. Probably gonna give him a costume and be done with it.

I read somewhere that the costume is coming up. so yeah, original hero will probably stay neutered and useless. Shame actually.

I’ve all but given up on Roc, SG sold us a lemon that you can’t even make lemonade from . I dont want to wait in vain for a costume or a buff this is Ridiculous!!!

As you see I’m still holding on .

Another balance change and zero mention of Roc, but instead strong heroes namely Magic and Starfall families essentially become S5 heroes !!!
@Petri
Can we have a definite answer as to this event hero being buffed? All Roc needs is his speed changed back to fast to fit the meta .

I think a viable buff to roc could be the addition of dispel all? It would make them unique and valuable, but not at all overpowered. As they stand I WANT to use Roc but they are so underwhelming.

The thing is… Why did they even change his speed from fast? He is a ■■■■■■■ guardian eagle. Should be fast as f*ck. But jokes aside. A honest comparison.

Take GM for example.
*damage upfront.
*dot over 2 turns higher than roc.
*very fast speed.
And Gm came out 2 years prior to Roc.
Gm is a hotm, Roc is a seasonal hero, and the newest of the bunch, compare to winter with krampus and pengi and roc is a even bigger joke.

Game evolution eh?
Even if roc would be fast. He would still not fit the meta. It would be a good start though. But he would still be too outdated as he as been all the time since his release. Dont even think a costume could fix him. I sure hope they think him over before the summer event goes live in June. Because i pitty the poor birdie sitting on everyones bench, looking at all other heroes going to war.

He should be fast/very fast with same special and stats he has, or.
Give him a good damage upfront to all with a boosted dot over 3 turns. The rest can stay as is if this happens.

At the very least they need to include that he blinds all enemies aswell as his other skills. He still wouldn’t be top tier but he’d be better than he is. They could introduce a costume who does direct damage, removes buffs from enemies and blinds aswell.

For Roc, if, IF, he gets a costume this year, i hope it’s burn dot. I say burn dot, because Roc, looks a bit like a Phoenix. This would make a nice additon to Sand Heroes, and would work well with Costume Rana and Yunan, without overwriting each other.

Yeah, so that you can stack sand, water and burn damage more efficiently. And also one more thing, add priority dispel for roc instead of cleanse. At least that way he can counter ailment shields and heroes like lidenbrock

So the long awaited Costume / update to Roc is here and it’s unacceptable unwillingly terrible just bland mishmash of nothing that doesn’t really fit the current mana .
I am beyond disappointed Soul Exchange here I come

yeah, very underwhelming even after the sand damage improvement

Roc needs a buff!!! he is one of the weakest heroes of the game

He just got a costume, think that’s all the “buff” he’s likely to get

is there anyone who has Roc and can take a picture of him fully maxed and emblemed? I’d like to see his stats and sand damage. Thank you. 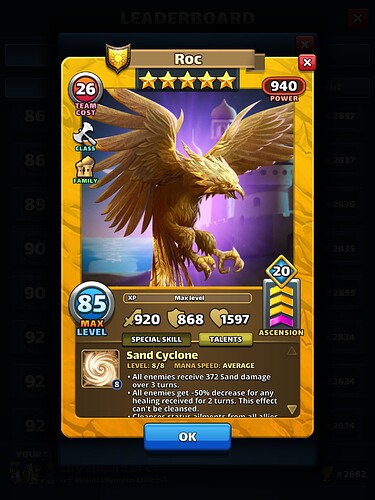 Hello all, Welcome to database of 5* LB heroes. Heroes vary depending how players emblemed them. Database is up to date and heroes are sorted in category’s of there release. Doing this for future reference to all who would limit break some hero. Special thanks to @PlayForFun for help structuring database also big thanks to @Remus_von_der_Venus, @Radar1, @Photon for helping me find heroes and make suggestions to make this database even better for all to use.

Thank you @Muchacho ! I didn’t know that we have database of LB heroes!
372 sand damage over 3 turns isn’t devastating. I have plenty of barbarian emblems, so I can give them to him once I max him.