Revenge raids are not fair!

Revenge raids are not as the devellopers told me by email, Mr. Petri, you told me a few months ago that when we raid over an enemy, the game make the ods in a way that I had more chances to win or revenge in a raid against players with more trophys. THAT’S A TRUE LIE! For several times, i’ve tried to revenge against players with more trophys and with less power than me, i’ve lost in the three attempts! The ods to win in the way Mr. Petri told me have made me lost hundreds of trophys! It’s sad that I’ve trusted in the word of a develloper and helped by buying stuff from the game and this happened for severall times!

Like said above, there is so much more to raiding than power and trophies. I’m consistently beating “stronger” teams to climb to diamond each day. I’m sorry you’ve found only frustration, everyone loses sometimes. Just gotta keep learning and growing.

By the way… Are you using 5* heroes? They tend to have over inflated hero power. What you think is strong may be actually weaker.

I’m using 3 5* heroes and a 2 4* heroes, I understand what all of you are saying but, according with one of the devellopers (Mr. Petri), this shoulden’t happening, the raids are made in a way that people with less trophys should win over those who have more!

Saying you have more chances or more help when revenge raiding is not the same as saying you should win vs higher trophy counts. Developers also cannot account for player skill. For example, are you still bringing rainbow teams to raid with?

I’m using one of each ellement, according with the emails that i have from Petri, he say that the ammount of trophys are important for the raids.

Perhaps you could share the text so we can understand what he said?

I think thats not true, unless your buddy had a low level heroes and he was attacked with a full 2* stars team, with a full level troops and he had more trophys that the attacker, because the raid generator doesn’t put a fight like that! I’ve been playing for a long time and never heard nothing like that.

This is one of many…

Thank you for the feedback.

The matchmaking system will match you against opponents at a similar trophy level as yours. The power level of the heroes or troops of the players is not taken into account.

See the trophy information at the bottom of the screen: 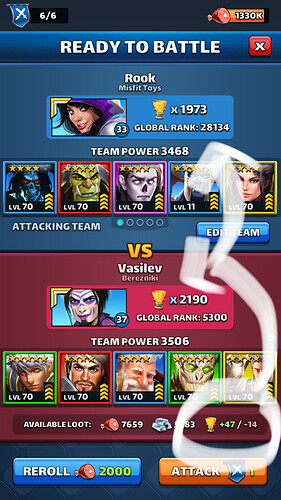 I have less trophies than my opponent, therefore if I win (and only if), I will get more trophies.

Please read the Forum Rules and keep your posts civil.

Naming and shaming other players or SG employees is not permitted, especially when you are wrong.