I wasn’t playing yet last year when this event happened. I see there are exploding pumping bombs for some tiles in thus event.

In the Easter event I started using 3 healers (different colors) because the egg bombs were coming in such large numbers in the later stages. I’m guessing pumpkin bomb spam happens in the latter stages for this event too.

Yep, the Pumpkin Bombs definitely add some difficulty and complexity, especially in the later Stages when there seem to be a lot more of them.

I like the Pumpkin and Egg Bombs a lot more than the Frosted Shields from Santa’s Challenge, though. Those can be seriously frustrating.

The Vampires had been fairly easy to fight. Antidote turns their special into a joke. It was way easier than the other seasonal events.
The pumpkins make it very auto-battle-unfriendly.

I’m a bit sad they didn’t add new heroes to the summons. But hey that at least makes it easy to save tokes for Buddy. Don’t want to miss him out again.

First Halloween Event for me as I started with Christmas Event last Year. I hated those egg bombs in Spring Event and I will hate those pumpkin bombs too.

But I guess my roster is good enough to finish all stages and that is what really matters.

I actually liked them during last Halloween as they reward you with mana if played correctly.

Unlike the Christmas ones, which just slow you down and block attacks.

Tutorial for completing Advanced Level 20 with 4-star heroes. This was before I really tried to use Classic heroes only for tutorials. There’s a Triton in my team that helps quite a bit with his healing boost. I may try recording another run using only Classic 4-stars.

That’s my team for nearly everything, season2, seasonal etc., the autoplay army 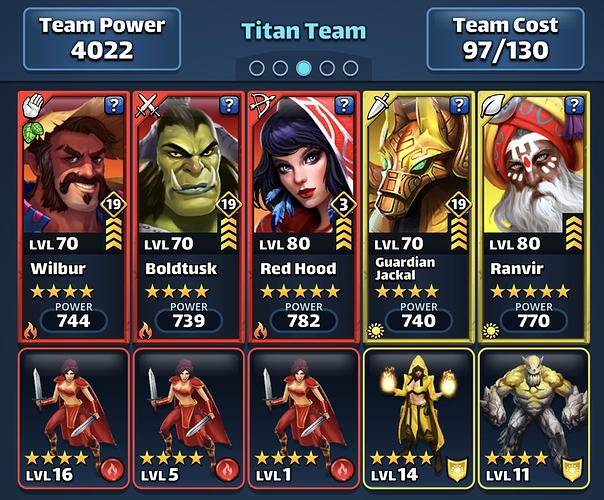 is there any color reflect? thanks.

I like the Pumpkin and Egg Bombs a lot more than the Frosted Shields from Santa’s Challenge, though. Those can be seriously frustrating.

That’s interesting, I started before Christmas last year and I can’t even remember those shields. The only thing I remember is the porridge lady and that I was really sad of not getting her

Please note that per #forum-rules, the official language of the Forum is English. You’re welcome to post in any language in #foreign-languages. In all other sections, posts must be translated to English before posting. Thanks!

I am very excited! I started playing this game last October, so Halloween was my very first seasonal event! It will also mark my one year anniversary. I pulled Vlad last time, my first non-classical hero. I still keep him although I no longer use him.

I only barely finished the normal mode last time since I just started and did not have any good hero. But this year it is going to be very different! I completed both Easter and Summer events with no issue, and I expect to do the same with this event. Bring it on!

The Small Giant Staff have told me that it’s October 28, but all announced dates are always subject to change.

*Please note that while October 28 is the date that the Small Giant Staff have told me the Return to Morlovia Halloween Seasonal Event is planned to start, this is subject to change

I too made the mistake of assuming that @Rook was a male. Then I joined the Misfits and I was like “Wait… Rook isn’t a guy?”. lol Not that it matters either way. I respect her just the same.

Return to Morlovia came around when I was just a wee babby last year. I struggled to get the Valeria avatar. I’m looking forward to potential completion of the event this year!

I hope there’s a tonic for sale during daily offer

Proteus is generally one of the most effective heroes for Events, since he can freeze all of the Bosses. Hansel, Gretel, Merlin, Peters, Li Xiu, and Chao can all have roles in mana control too.

I know she is rare enough that many players don’t have her, but I just wanted to take up for my girl. I was only like three weeks into the game last year, so I didn’t get very far, but this year, I’m looking forward to unleashing my Onatel/Poseidon fury on some vampires!

You don’t need flasks and you can do every single one from the side quests in that time without waiting too long for new world energies.

Another agreement with this. WE is not a problem. No need for flasks.

I’m a bit sad they didn’t add new heroes to the summons. But hey that at least makes it easy to save tokes for Buddy. Don’t want to miss him out again.

I’m feeling that. Only thing that makes me hesitate is that October’s HotM is far superior to December’s. Hoping there’s some slop over into January with the Christmas event, but I think @zephyr1 said elsewhere that it didn’t last year, and I seem to remember that being correct.

Victor would also be a great second purple legendary for me, but Vlad and Valeria seem kinda meh. On the other hand, the Christmas heroes are all bosses. Like you, I’m aiming for Buddy and hoping against hope for Ma North. I’ve got plenty of shields and tonics for her, as I have yet to draw a legendary green. (Have at least one in every other color.)

I hope there’s a tonic for sale during daily offer

For me, it would be darts, which I am perpetually short of. As F2P, I’ve never spent any money on the game, but I’ve been doing those Google Opinion Surveys and have like 7 bucks saved up in Google Play credit. As pointed out in zeph’s excellent summary, these holiday deals are often among the best available. Anyone track what they were last year, so I can get a sense of what my free Google credit might buy?

Anyone track what they were last year, so I can get a sense of what my free Google credit might buy?

I have screenshots of most or all of the ones from last year, but it would be more informative to look at the ones from Sand Empire, as those and Springvale were fairly similar, and tweaked a bit from what we saw last year.

The most common small offers are usually:

There are typically only a small number of those, and they won’t cover all ascension materials.

there were rings and tabard for sale in sringvale, darts and tonic in summer event. So do you think we can expect something different in morlovia? I need so much the tonic

Well there are only 5 element specific 4* AMs so likely we’ll see a repeat. Since there is likely a tabard in the event stages, I’m betting we’ll see a scope and one of the other 4 again. Whether it’s in the $9.99 offer, $39.99 offer or the $99.99 offer is another story