TC13… Something that I haven’t used for a while ever since I have 2 x TC20s starting in July. I wouldn’t say they were totally useless to me. In March I was still relatively new, and I was leveling things up relatively evenly. So I was really excited to finally got my SH to 15 and then TC to 13. That’s then at the suggestions of veteran players that I should really focus on TC20 for the long term.

So that’s when the road to SH20 starts and along the way I also needed to update my Iron Storage (for the SH20 stockpile), and Food Storage (for the eventual TC20 research stockpile). So why did it take me until July? I am C2P and did not use VIP Pass for the 2nd builder.

While the SH/IS/FS were upgrading, I’ve got 2 TC13 working for me. Back then there was no War Opt-Out feature so I was also building a bench heroes. Having TC13 helped me fulfill a lot of that goal where I was able to get a lot of the 3* heroes fully leveled. Most of my 4* at the time came from Hero Tokens (Melendor, Kelile, Li Xiu), and through TC13, I was able to get Gormek, Colen, Cyprian (plus duplicates of Melendor and Kelile). The percentages aren’t high, but they did come through for me occasionally.

TC13 might see its usefulness dwindled, but it really depends on where your base is.

Did you register the training results of the last two month as well?
Curiouse as my alliance and me are quite sure that it has changed now.

I pull a few WuKong when I started this game, his stat were so poor , i feed a bunch of them to joon, now i trying to get 6 for wars

I wish I can, can use 3 for AW. But u never know , we might have trading center in the near future.

haha yes, if one day we can trade, i’m full of gormek, a pig VS a monkey…it should be a good deal…

I’ve been pretty lucky with my one TC13. My SH is upgrading to 17 now and I had stopped TC13 training after getting TWO 4* Heroes. 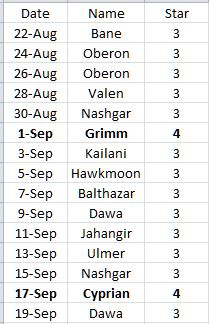 I was lucky enough to get Boldtusk on my first attempt.

TC20 is definitely far more lucrative. I started a 2nd account and am skipping right past TC13.
FWIW, I reset the TC20 odds tracking spreadsheet as there is some suspicion SGG may have changed the odds with the release of season 2. We had 3500 data points for season 1, so we know the odds there. For season 2, we only have 164 data points so far, too low to draw any conclusions, but here’s where we are at so far. 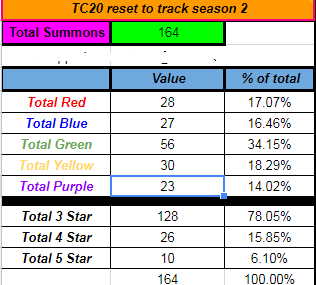 haha no, it seems to be…japaneese in style, they’re pretty funny, i’m going to take a look at this

Man dont give up,i have 2tc13 running 24/7 while my third is on the way to 20(17atm),in some 2 months nothing then in some 4 weeks starts to spit out all 4’s,trouble is there are only BLUE&RED 4’s backuped by my only 5 ,aegir(sigh),so just let it roll,u will get something eventually

I had an excess of recruits and a lack of swords or packs, so i decided to dump them into my tc13. 2 days later…drum roll…

Blah!
My training camp is at 16 right now and im currently almost to enough iron to upgrade my stronghold to 17…grinding my way there!

I have never done a single TC 13 and never will. TCs have been running TC11 non stop since I got that level.

Just pulled a Karil off it today. Kiril ate him immediately.

TC20 is definitely far more lucrative. I started a 2nd account and am skipping right past TC13.
FWIW, I reset the TC20 odds tracking spreadsheet as there is some suspicion SGG may have changed the odds with the release of season 2. We had 3500 data points for season 1, so we know the odds there. For season 2, we only have 164 data points so far, too low to draw any conclusions, but here’s where we are at so far.

We could open a thread exclusively for results past the Atlantis update to collect a lot more data points to see whether the odds have changed or not. In the existing TC20 results thread it’s often not clear whether the data is from before and after or only from after the introduction of season 2.

As for the TC13, I usually ran two of them (until April this year) and got one 4-star hero every three to four weeks or so–basically, the same percentage other players have reported: 3 to 5 %. Thus TC13 is nice to build a good bench of 3-star heroes with the occasional 4-star surprise, but as a F2P or C2P you have to get to TC20 as quickly as possible.

Oh, and for all who are not satisfied with the TC levels as they are now, please vote for / comment in this thread: Training Camp - REDESIGN PLEASE - #10 by DJQuixo
TC 14 - 18 are basically completely useless as well as several other levels who become obsolete until you have reached a certain level. Therefore, it would be quite useful to have a better use for completely useless levels and also to reduce the gap between TC13 and TC20 by adding something inbetween that gives somewhat better chances at 4-star heroes until after several months of expanding the base eventually the awesome TC20 is ready to start

I wonder if people still bother. On my free to play alt:

I’m ending this ■■■■■■■■, managed to save up gems and got lucky enough to summon Kelile and Lil John. Never gonna try to traing anything but feeders until I have lvl 20 tc