Some things must be done

This caught my attention as an interesting idea, and I didn’t find a similar topic in the ideas/requests forum. It would be a nice addition with more s2 and s3 costumes coming along.

Omg no you want to replay every level again?

As I stated, I think the idea is interesting. It could offer something worthwhile to do during AR/VF/Underwild Whatever for those who have completed it. And, it could give some free chances for the costumes that come out and/or 3☆/4☆ that are missing.

I don’t know that I want to play through all of them again, but I play stages for POV or during their events, and I wouldn’t object to having a way to get coins.

Omg no you want to replay every level again? 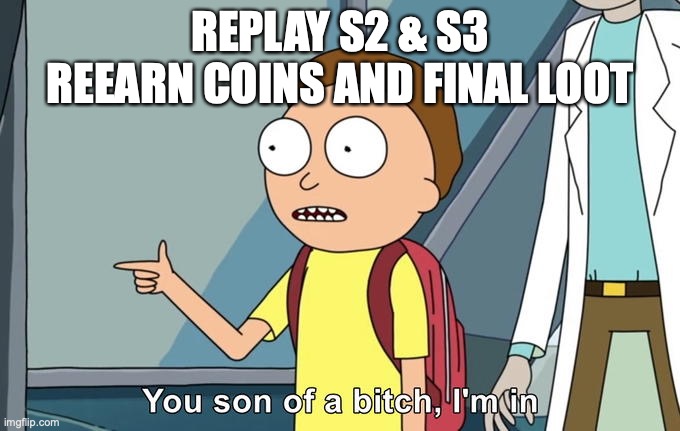 It would be too good if the final loot is rewarded too, but too much to do.
I think SG will never implement such thing.

Instead of this I would prefer a special quest during the events, which have 5-10 stages and they give us 100-200 coins.

I don’t know… replaying every stage is a pretty big task and a fair amount of WE flags that you can’t Loot Ticket your way through. Might be worth re-giving partial final reward loot again.

Though they should change the S2 Hard mode to be sequential like it is on S3 & S4.

Instead of this I would prefer a special quest during the events, which have 5-10 stages and they give us 100-200 coins

There was a suggestion to introduce an S1 Hard mode …

I’m just thinking how we could overbridge the time until s3 would be released. And thought to implement a hard mode to s1! Nothing special, but the mechanics are available from s2. The difficulty and loot upgrades can be taken over as well. Should be an easygoing for the programmer with less effort and time to bring in a new feature

Of course I’m still slogging through S3 hard at the moment. Not in any hurry really.

Though they should change the S2 Hard mode to be sequential like it is on S3 & S4.

i actually dislike this mechanic. i would much prefer if S3 and S4 operated like Atlantis when it came to Hard mode.

Much better idea!! Except I’d hate to waste flags in AR

I agree with more coins.

i actually dislike this mechanic. i would much prefer if S3 and S4 operated like Atlantis when it came to Hard mode.

I tend to agree, except if you’re operating under the proposal of this thread to allow players to replay previous Seasons I don’t think you’d want them skipping directly to the final Hard Stage to collect the significant AssMat rewards.

I don’t think you’d want them skipping directly to the final Hard Stage to collect the significant AssMat rewards.

this isn’t how Atlantis worked. i finished 27.9H and 27.10H early, but the actual trigger for the ascension mat reward was completing all the levels. just because i beat Ursena on hard mode when i still had like 20 provinces left on hard mode wasn’t enough to get the rewards.

and i didn’t complete those levels early to get the rewards anyway; i completed them early so i could loot ticket farm them during Atlantis Rises.

Definitely an interesting idea. I would play through it all again, even without the big completion reward. It would be nice to get more coins again.
It would be nice if Atlantis/ Valhalla coins were included in higher tier loot for Event Quests.

i completed season 2 backwards for this reason

I’d like to see coins given during season 2,3 and 4 during the season event.

The reason behind this is once the season has been completed, the chance of accumulating coins for Hero summons is very poor.

I’d like to see the coin drops for normal and for hard to be available once again during the season event.

That’s because they are a mission reward you have to collect from the mission button on the bottom of base screen.