Remodeling my defense team: who should wing it?

The RNG bestowed me with some lovely heroes and ascension items this month, and it’s almost time to overhaul my raid and war defense teams. My current team is the best of what I’ve had to work with, but leaves a bit to be desired, as there is no real healing, and Rana doesn’t really bring a lot to the table here. 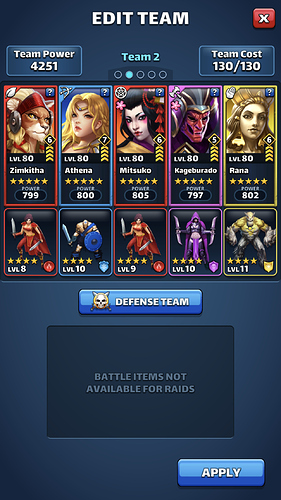 The big new additions are Guin, and final ascensions for Ursena and Lianna. I have all the materials to max Guin, so my raid defense plan is to run Kage, Guin, Ursena up front, but I’m not sure which way to go on the wings. I figure Zim is my best option on the left, but on the right I don’t know whether to go with Lianna or Athena. I’ll be putting two nodes worth of emblems on Lianna immediately, but I’m not taking any off my precious Athena.

I would much rather have fast heroes out there than average ones, but that wonderful defense down is so tempting.

As for my war defense team, my alliance doesn’t run a uniform tank color, so best possible rainbow is the order of the day, I think. I figure Zim, Kage, Guin, Athena, Lianna is the right choice here, but input is welcome. Maybe swap Lianna and Athena?

Here is my roster of relevant heroes. Nobody else who’ll be in the defense conversation will be ascended anytime soon 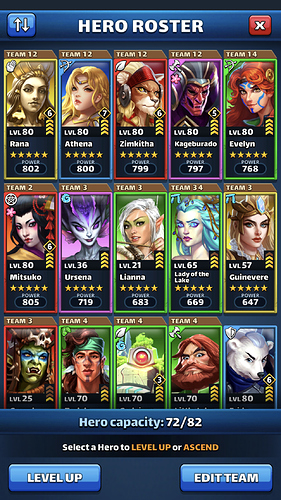 Thanks in advance for any thoughts!