All older heroes need an improvement. The next Season 4 heroes will come out and a new tower will be starting with a lot of OP heroes.

And they’re cherry picking certain popular heroes for their costumes. It’s pretty obvious why gravemaker and Finley got costumes first than other older heroes that desperately need any forms of a buff.

Red Hood’s minions are interesting in that they don’t attack.

Maybe make Red hood Fast speed but remove her damage and have her minions gain 15% HP and 15% attack. At least she would be more useable then imo and I would maybe attempt to pull in Grimforest lol.

Or give her a costume that does that with +5% mana costume bonus.

I was coming here to say something along these lines.

They aren’t going to buff her for free when they could give her a costume you’ll have to pay to get.

My costume for red hood.

Welcome to our new Hero Balance sub-category! Please share here your feedback on hero balance. Which Heroes would you like to see balanced? Make sure to search topics first, please don’t create duplicate topics for Heroes. Only two topics per Hero is allowed, one for nerfs and one for buffs.

I would like this as a Red Hood owner, but these threads might be more valuable with a tangible recommendation. For example, what specific adjustments would make Red Hood more playable? My alt had Inari, for example, and she was pretty worthless because she didn’t do damage and the animation length rendered her unusable against Titans. They addressed both issues, and I subsequently trained her up and use her more now. (I wanted her high attack against Titans, but just had to remember never to click the Special: it took FOREVER!)

So, reading my Red Hood:

Deals 131% damage to all enemies (at 729 ATK without emblems): that’s certainly not going to do very much. What percentage would make this hero palatable?

Summons a Fox Minion with 14% HP, recovers 7% health for owner, protects from mana reduction. Would it be better for this Minion to heal more, be beefier, actually do damage to the opponent, or some combination of the three? It’s as beefy as a Frosth Minion, for example, and twice as tough as a Christmas Minion. However, it heals instead of hits: should it do both? Should it’s healing be more substantial?

Average speed: my Big Two for Minions are Frosth and Freya, who are both Fast. On the other hand, they don’t hit anybody. Average doesn’t seem like the problem here.

So, full confession: I almost never use Red Hood. I emblemed her because she seemed like an enormous pain in the Event and I thought the combination Meat Shield / Extra Healer would be useful. A healer who actually damages all! What a deal! Except … she doesn’t hit hard enough, and the Minion doesn’t last long enough to be reliable healing, and instead of the Best Of Both Worlds I kind of ended up with Not Enough Of Either World. Anyway, I haven’t “run the numbers,” but if she both hit harder and the Minions were tougher, I’d use her more. If she got one or the other, I’d probably ask for a harder hit first, but I could see an argument for tougher Minions (or Minions that also had ATK).

@Lippy
I was going to come back with my ideas, suggestions and recommendations once I had created the threads being suggested by @Petri

I levelled Red Hood when I got her, I then went as far as putting emblems on her. Only to take them all off a few months later to give to another hero. She now sits idle on my bench never being used.

My suggested buff is this:

Deals 200% damage to all enemies

Summons a Fox Minion for each ally with 28% HP. The minion boost 7% health for its owner at the end of each turn. If health exceeds max HP, it is added as temporary HP. Max temporary HP is 100% of max

Is this the right “Request a buff” post to write in?

I just came across that…Hulda, is her name? And my goodness, Red Hood is but a shadow of her. Except for her beautiful art of course

Here’s to hoping for a buff

hey i love @FraVit93 buffing suggestion for red hood, and the buff seems balance and make her useable.

the thing i worry is SG will use that skills as her costume, and you need to summon her again, meh

I doubt Red Hood will get buffed… I got her from HA10 a few weeks back, but I doubt she’ll ever go above 370, even if I’m f2p and I have plenty of rings. I have enough useless red 5* warming my bench, waiting for a lucky costume gate pull… or a miracle (buff)

I just start slowly leveling her until 3/70 and waiting for her buff.

She needs more than one buff, hope she will get a solid costume, minions cutting mana or blinding or dogde or all of that, more hp on minions and a golden cape, Goldhood 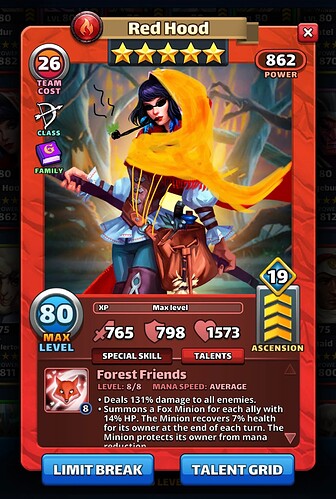 I just want this lovely lady to receive a buff.

Her minions are so easily removed.

Her minions do not even attack or cause any kind of debuff. (Though their buff is nice and unique of course)

Her minions have such a low amount of health, even if she’s fully LBed and emblemmed, as far as I can tell.

Her damage to all is not very good for an Average Speed hero either.

A lot of things could be improved with her. Please so not let a costume be the answer. Please give her some love in your next round of balance buffs

Thank you for listening

Her art work is so gorgeous - she deserves so much better

I do not have Red Hood and think she is probably the weakest average red 5* hero that exists. I fully approve of a buff to her, but these darn vote limits don’t allow me to support by clicks.

I do not have Red Hood and think she is probably the weakest average red 5* hero that exists. I fully approve of a buff to her, but these darn vote limits don’t allow me to support by clicks.

I support a buff but I also can not Vote

Buff her damage to 250% to all enemies and call it a day. Or make her minions really special, giving mana and health recovery with stronger minion health.

Careful don’t make my anzogh the weakest red 5* average hero, he only has Red Hood to make him look like he is ok lol.

I’m sorry Gwyn I can’t vote either. I definitely would if I could.