Tibs has the highest attack and tile damage.

No, Grimm has highest attack, that is why he gets an A

Actually, Grimm has the highest attack and tile damage.

My bad. I got my numbers mixed up

I guess that does make some sense then.

I thought Peter North was the best ramming pulverizer?..oh you mean in the game, sorry.

I have all 3, but only Gormek and Grimm are maxed.

I have a soft spot for Gormek because he was my first 4* hero and I used him as tank for the longest time. Nowadays he mostly just sits on the bench, sharpening his axe and waiting for a war outing. Barely ever complains, and is unintelligible anyway when he does.

My favourite pulverizer is Tiburtus because I always use it to counter Vivica’s defense bonus.

Tibs looks exactly like every mad king/prince who abused his wife and kicked a peasant for no good reason. I can’t.

I have them all, and I love them all. Grimm and Gormek are both on my defense team. Gormek was my tank for a long time, too, until I maxed Danzaburo. His high defense and HP plus the rogue skill pushed Gormek to flank. Tiburtus is actually more powerful than both, thanks to me not having a better ranger for emblems, but I have two healers on my defense team (Melendor and Sabina), so he has to sit the bench. He makes a beastly anchor to my second war team, my purple stack for yellow Titans, and he tags in for Gormek during those forsaken underwater Atlantis levels that half his already anemic damage.

I’m to the point now where Gormek’s meager tile damage is starting to get annoying, and I’m kind of hoping to pull Boldtusk, demote Gormek and Sabina, and promote Tiburtus to my first team. But I will always have a soft spot for Gormek after noticing this: 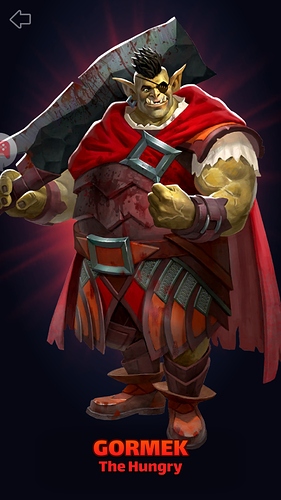 When I saw his appelation was “the Hungry”, I knew I had found my spirit animal!

I have all 3 maxed, Grimm is the attacker, gormek is defense and tibs is all around. Granted that’s over simplifying but roughly true. Grimm is weak with def but hits hard. Gormek is health heavy but hits soft and def is soft. I gave my emblems to Grimm after reading the thread debating the 2. I tend to use tibs more only because I have kiril and triton for blues. Now real debate…ramming rush, Isshtak or Karil?

Why is Grimm considered better than the other Ramming Pulverizers?

Grimm’s defense stat is lower than Gunnar’s defense stat. Instead Grimm has a huge attack stat which does nice matching/ tile/ board damage even when Grimm 4* 3.60, or 4* 4.70, is dead.

For neutral damage, Barbarian Grimm does the most matching/ tile/ board damage for maximizing Wound talent.

Grimm is squashy with high attack

Gormek is tanky but almost without attack

My favourite is Tibs beacuse he is between them.

I agree. When I Gormek as a tank in gold he doesn’t worry to much because the attack is so low, when I see Grimm I know I can take him out without too much trouble.

Tibs for sure. Pierce makes it an easy decision for me.

Grimm is easily the best of the trio…ATTACK!

With my emblems and troops(only a blue 3* l6) I have Grimm at over 1270 hp plus extra defense and attack. I’d emblem tibs but triton got those and when I move them to my 5s or leave on triton and new ones to 5s tibs will still be without emblems. He’s reliable and best all around. But attack is Grimm defense is gormek. Tibs is the middle doing both good. If I could have only 1 with the base stats, no troops or emblems likely itd be tibs for his well rounded use but Grimm would be a very close 2nd.

Shouldn’t we have a vote here? I’m voting for Grimm.

From a technical standpoint - Grimm hands dowm.
From a visual/artwork standpoint i adore my Gormek.
Never had the chance to meet Tib lol, maybe one day it will show up [dark heroes hmmm - yeah they hate me].

Of the three, I definitely use Grimm the most. When paired with Frida, damage is very nice and the victims are susceptible (if still alive) to being squished by just about anything. Sneeze on them after that and they fall over

Tibs is handy but when I am 3-2 raiding he has been supplanted by Proteus, making the 3 purples Khiona, Rigard, Proteus. Only time he gets a run in raids is if I don’t feel I need a cleanse, or want to go full offence. I also have Thoth up to about 4-30 and he is a nice option too, relegating Tibs further down the pecking order