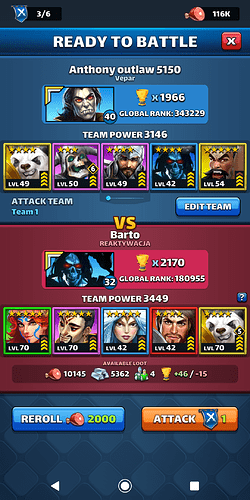 Do you have a video of the raid that you can post? That would help us determine if there is an issue.

Otherwise, my response would be that you brought 3 slow heroes to a raid against several average-speed enemies, so they will naturally charge faster. That’s in addition to the way the defense team generates Mana, which is based on tile hits and number of turns elapsed, that will make the tank and flank enemies charge quickly when you clear many tiles at once.

Thr team had 3 slow, one avage and one fast, and the slow one’s hit the most,

We’re perfectly willing to believe there’s a mana speed bug. Unfortunately, no one reporting potential instances of it ever provided video, so it’s hard to tell what’s actually happening.

Thr team had 3 slow, one avage and one fast, and the slow one’s hit the most,

Oh right, I got the two teams reversed. Sorry about that; it’s Friday and I need coffee.

In that case, I agree with @Peterenp. Ariel boosts the Mana generation of the entire team, so they’ll charge much faster than before. Khagan would present a similar challenge.

I’m not sure what to do with your assertion that you were hit by 16 distinct special attacks.

Your offense simply doesn’t have enough health and defense to survive 3 hits from Colen in 6 moves, let alone throwing in 3 hits from Hu Tao and 3 hits from Evelyn. And if we add even one activation by Kunchen, the damage to you would be staggering.

This is why video would be helpful.

Not even 16 normal attacks.

Just to make sure we’re not having terminology problems:

When Colen activates his special once, it will hit all 5 of your heroes. But that’s only 1 attack being made.

I have noticed this as well in a few raids I’ve made, but not every one

I’d killed her in 2 moves thn the hits started

I could understand 16 attacks total attacks (normal plus special) happening in 6 or 7 moves. 11-12 normal attacks plus 4-5 specials is feasible. 16 special attacks, though, is baffling.

How are you even surviving 3 of Colen’s whole-team-hitting specials, though? That should have wiped you all by itself.

If you are using an Apple device, you can screen-capture video using the native software support. You need to add this feature to the swipe-up/down menu (where the flashlight lives) from the Control Center.

On an Andriod device you need to use a third-party app, like DU Recorder.

In any case, I’ve been raiding consistently of late and seen nothing unusual.