Raid Tower Revenge Reroll – Pay for reroll when opponent is online? Why? 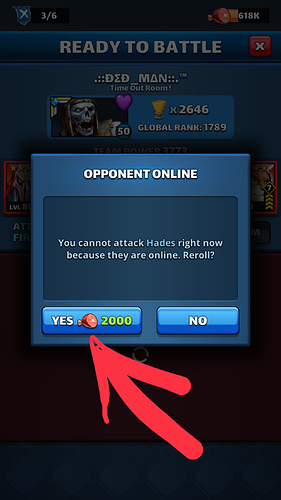 They didn’t add a cost. They clarified that doing the reroll does, in fact, cost ham. It always has had a cost, but it wasn’t clear before, so people got surprised. This explicit text was requested by the community.

I must be remembering this wrong, previously if I selected reroll, it would take me to who was available in the normal raid area by default. (Thereby not really being a reroll). At that point, if I rerolled, it cost.

Nope it was always a reroll paid with food.

Man, I’ve been paying 2k ham to be lazy

Mod, I f you could please remove/delete thread.

Thanks for the clarification

And THAT is why we all wanted the text. Because people didn’t realize it was sucking ham out of storage

Opening for Merge of another nearly identical thread.

With the update we now have to pay to reroll if our opponent is online, why? We can’t attack them, so why do we have to pay to reroll? If you are raiding, lose a match and the opponent has come online your ONLY choice is to pay to see a new opponent. Or I suppose wait hours until they are offline. Seems inherently unfair.

I’m guessing this change was made to close a specific exploit that could be used to get unlimited free rerolls. There probably should be an exception carved out for the situation you described, though.

It was always paid with food like a normal reroll. They just added an information to that popup but nothing else changed.

Pay for reroll when opponent is online? Why?

your ONLY choice is to pay to see a new opponent. Or I suppose wait hours until they are offline

this is sad…
I thought free to reroll =(

Pay for reroll when opponent is online? Why?

If you are raiding, lose a match and the opponent has come online your ONLY choice is to pay to see a new opponent. Or I suppose wait hours until they are offline. Seems inherently unfair.

This sucks. Luckily it has not happened to me yet.

But I have found this happens if I fight an opponent, click rematch, and wait 60 minutes for more raid energy.

Perhaps the change was to encourage players to use raid flasks. I have 83x raid flasks. Where is the “Atlantis Rising” version for raiding?

There probably should be an exception carved out for the situation you described, though.

I wonder if this change was made to fix the “I was gorram online and I was raided!!!” rants.

With 2 rematches, you could raid a player twice while they were online.

Nope. And that’s why we wanted the button clarified. You were always spending 2000 ham.

You were always spending 2000 ham.

I thought you got free rerolls if you REVENGED a player that was online ( linky, linky )

The complaint above appears to be about REMATCHING a player that has come online during your first raid or your first rematch.

The poster appears to be discussing the situation where you are using one of your rematches, and the player comes online.

In my experience you cannot raid ANY OPPONENT until you pay the 2k food or the REMATCH opponent goes offline.

I think there’s a glitch right now that forces you to pay for a reroll if your current rematch opponent comes online. Doing a Revenge in the Tower fixed that

You were always spending 2000 ham.

I thought you got free rerolls if you REVENGED a player that was online ( linky, linky )

There seems to be a bit of confusion going on in that thread. To clarify my point from there: I was simply saying that revenging someone offline is always free. So you could go and pick a different revenge target from your watchtower and click revenge for free.

Any time you hit the reroll button, in any circumstances, it’s (SH level)x100 ham. And as far as I know, it always has been. It’s been that way since I started playing late last year.

The weirdest part is it doesn’t always do this

You are what I like to call sticky-paired with an opponent once you match with them. To clear a sticky-pairing, you need to match with someone else, either by picking a new revenge target or by rerolling. If this sticky pairing sometimes gets lost, that’s probably a bug (but I don’t know that I’d report it

You could certainly propose an idea to change that by adding a timeout. But that creates a loophole by which someone thinking about flasking can get a free look at their next opponent and only then decide whether to flask or delay until the pairing clears.

Forced to raid reroll and lose food? why?
Start raid without re-rolling in any case
next page →