Raid tournament mandatory, if you like it or not?

Something strange happened a few minutes ago. I was leveling a blue mana troop and as I tapped the lvl-up button I got a warning as for being about to use one of my tournament defense troops in the process. Nothing unusual so far, got this so many times before… except, I am not signed into the tournament, haven’t been in about a month… I went and checked to see if somehow I haven’t joined in by mistake. No, I didn’t. No tourney for me. Still, somehow, I got the feeling that the AI is using my ingame id and some defense team, built of my heroes against tournament participants. Perhaps, even using my roster to create bots to attack them. So, what the hell is going on? I did not agree to be a part of this tournament, did not set up any defense. Is the AI using my roster against my will? This might explain all those healers on no heal tourneys defense teams… I know we don’t own the heroes in our rosters, but still, we did put up some effort in leveling them up and might not be confortable with the AI using them, or our ingame names, as it pleases… I sure don’t like this one bit… and if my teams are used into the tourney, I really think some loot would be due ar the end.

That’s odd. What happened when you proceeded to feed that feeder troop away ?

I haven’t encountered that situation because I join weekly but May not use any attack flags.

If your theory is correct, that could be SGG way of adding diversity to defence teams available to dilute the probability of TreeVil/Faiez teams.

That’s odd. What happened when you proceeded to feed that feeder troop away

It feed away just fine. No surprise there, I’ve feed torney troops before. Usually, the fed away troops are automatically replaced by troops with the lowest possible attibutes.

It would be funny if someone you know faces off with your RT defence and tells you about it. Lol

My thoughts, exactly… I imagine they would be like: “Look at this fool… two healers on a bloddy battle week…”

Its possible the game sets aside your tourney defense regardless if you participate somewhere in its data storage. When you join you have a defense set up already. So it’s possible those five heroes and troops are set aside somewhere in the background logic and there’s no actual check to see if you’re opted in to the tournament.

The numbers involved would be way higher though if it was including people who aren’t opting in.

Does feel like a weird bug, maybe it remembered it was a previously locked troop??

No. If the non participants were conscripted to be defence bots, those players wont be ranked.

They didn’t opt to join in. They wouldn’t be placed. No loot either. Won’t be part of active participation “headcount”.

Its possible the game sets aside your tourney defense regardless if you participate somewhere in its data storage. When you join you have a defense set up already. So it’s possible those five heroes and troops are set aside somewhere in the background logic and there’s no actual check to see if you’re opted in to the tournament.

I second this, ESPECIALLY considering fact whenever you join tournament, your defence is already set using one of your previous lineups.

No. This is not the case for me. System puts together the top 5 heroes I can use. It’s not the raid defence that I used that last round. My raid defences are pretty standard.

using one of your previous lineups.

It has never been set with my previous lineup. Pretty sure it’s just my top 5 heroes and troops by TP. Or some other configuration that wouldn’t be good.

Correct, this is my tournament defence of current week made by default, and use my top5 heroes by TP, from left to right, from 551 (kvasir, the only 3* I used embelms on) to 481 (G. Lemur) 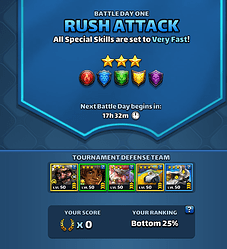 never used this team before anywhere, for sure