Got completely and thoroughly destroyed just now in the raid tournament. Won all 5 matches yesterday, couldn’t kill ANYTHING today. It was like I had all 2*'s and all my enemies had 4’s. Never seen anything so lopsided. I had a total of 2 kills in 4 battles. How can that happen when I have a team of maxed 3’s? FOUR battles in a row???!!!

What can we, as a forum, do to help pick up the pieces? And to make sure this form of treachery never happens again?

I’m having the opposite reaction to this tournament; I’m having a great time taking on the challenge of emblemed 3* defenses. I’m at 10 wins on offense with this bench to choose from: 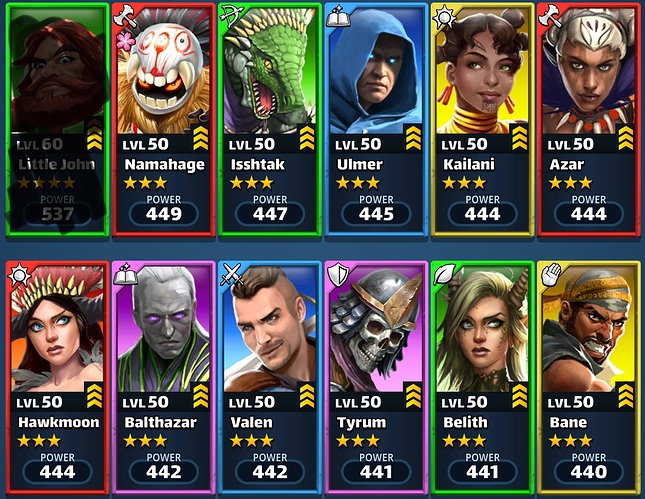 Toughest battle I’ve had so far was against this defense (I got the win, but it was close): 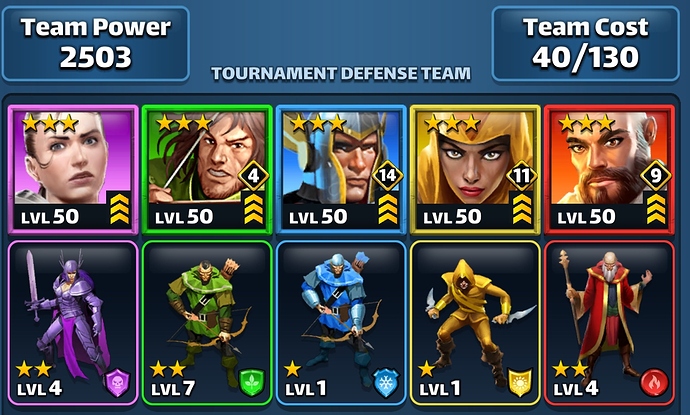 Were you fighting emblem heavy teams?

Wait, so somebody not only maxed Dawa AND Prisca, but they also gave Dawa 11 talents worth of emblems? Is this shopped?

Same here… But I am taking it more as a challenge. I use my emblems only on the 4 stars (don’t have a 5 star maxed yet). So, naturally none of my 3 stars have any emblem. But I do have around 16 maxed 3 stars, so I am simply using 3-2 colour stacking. Have won 9 so far, and lost once to this guy. 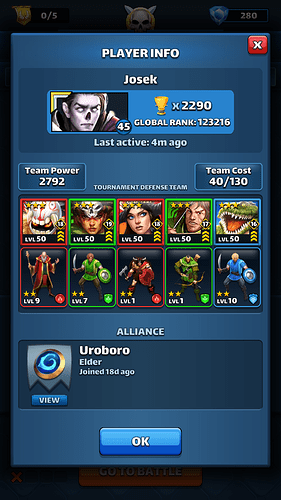 Still, I managed to take out 3 of the heroes. But it was just too much to handle, it was almost like going up against a 4 star 3.60 team. Anyway, I guess last time it was too easy and this time too hard. Now, SG just needs to find a middle ground for the matchmaking.

Wait, so somebody not only maxed Dawa AND Prisca, but they also gave Dawa 11 talents worth of emblems? Is this shopped?

If it were, Dawa would have 99 talents.

Gunnar and Berden definitely carried that whole team. Dawa still hit like a noodle even with 11 talents, Jahangir’s fire was easily compensated with my Belith’s healing, and Prisca didn’t even have a chance to fire her special.

I was too busy cussing up a storm to look closely at the other teams, but it’s quite possible they were heavily emblemed. I have not emblemed any of my 3’s, mostly because I had no idea I’d need to. The last tournament had no limitations on my raid team, and I don’t recall seeing anywhere that this one would be limited to 3’s. So now I guess I’ll pay more attention to them, as well as 2* troops to support them. Unfortunately I still have a bunch of 3’s without fully leveled abilities, so this is not going to be a quick fix. First and foremost, stop feeding 3’s to my 4’s and 5’s!!

And that is part of what is making this tournament such a disaster.

Many players are in the same boat. They don’t have a great 3* team. But now they see they will need it. SO those with great 3s and emblems to spare or risk on them had the advantage. But alas the loot is reduced so that advantage becomes less and less now in the future 3 tournaments.

And that is part of what is making this tournament such a disaster.

Many players are in the same boat. They don’t have a great 3* team. But now they see they will need it.

Maybe that doesn’t make it a disaster. Maybe that’s the whole point. Keep those heroes useful, and make it so that newer players who are still relying on those heroes get a shot at something nice (if loot ever gets de-nerfed). I like it. And no, I’m not one of those players still relying on three-stars. I went back and power-leveled Melia just like a lot of other folks.

lol I’m one of those who leveled up Gunnar with 14 nodes. I at least had better heroes than Dawa or Prisca though: 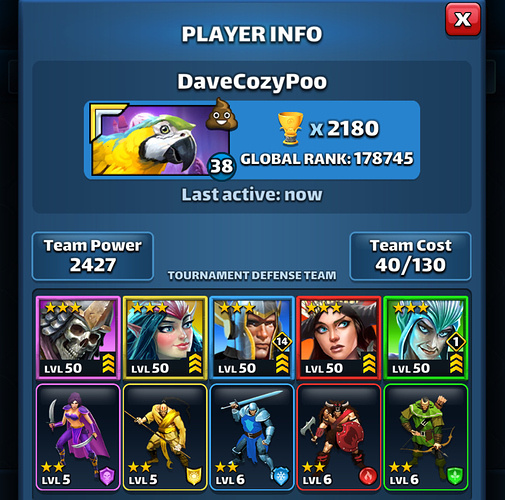 Only match I lost so far, I made poor judgement and stacked 2 green and 3 red. Nashgar hits like a truck too. Not a good idea with a bad board: 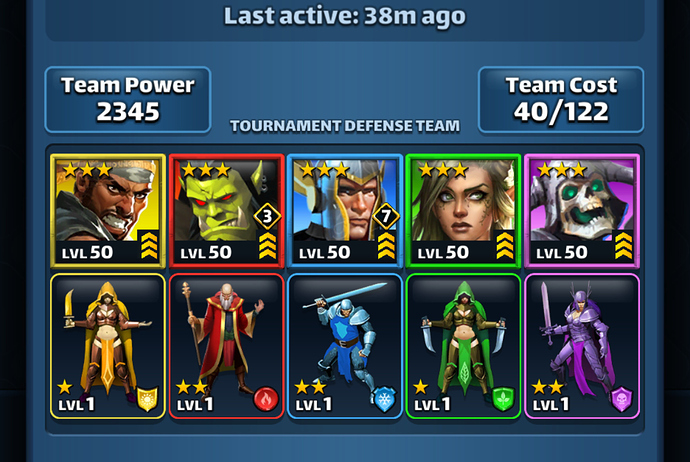 That’s one of my two loss (on my main). Actually, she really didn’t lift a finger. I stacked 3 green and 2 yellow, but Valen was still alive after first three moves. Bad board, Balth and Berden did the rest.

I really didn’t see it coming

Yeah, emblemed Gunnar’s have caused me a TON of problems this tourney. He’s beaten me twice already (in part because I don’t have the green depth I need to stack against him in a three star tourney!).

Good on you for taking these guys out!

So this tournament has kind of confirmed to me that most talents aren’t worth much. Going up against most teams with a lot of talents didn’t seem to make any real difference. I didn’t run into anyone with a solid Jinx yet, that would be one I would worry about in this competition, but the rest - most of the advantage seems to lie in the stat bonuses.

What a waste of emblems!

I have 100 paladin emblems in storage and (unfortunately) a maxed Prisca, but I’m like, “Nope. One day I’ll have a maxed Sonya. These are for her. Hands off!”

Yeah, emblemed Gunnar’s have caused me a TON of problems this tourney.

I anticipated they would, especially with my poor 3-star dispeller depth. Since I don’t have a good purple option anyway, I skipped purple and stacked Belith and Brienne on my defense team. Hasn’t seemed to work, though. They are 1-for-6 on defense. (6-for-7 on offense, though). Saving the rest of today’s raids to fill my chest this afternoon.

Till the you will have some reset emblems! Show some love for Prisca

I have three reset emblems currently, but I also have Sonya at 3^60 and the capes I need. Was holding out to see if I might pull a Kiril for the capes, but if I don’t by the time I finish my Gunnar leveling project, I’ll have no further blues to work on, so Sonya gets the capes, and soon after, the emblems.

I’m saving my resets for Valen+13 (hoping to pull Boldtusk) and Hawkmoon+18 (yes, really!). Those are actually useful heroes, though, and worth the emblems in the interim. If I pull Boldtusk, I’ll probably also reset Gormek and demote him to the bench, then give his emblems to Grimm, who will remain in my main team. So there are my three resets right there. As F2P, I’m not wasting precious gems and emblems on a reset if I don’t have to, especially not one involving Prisca!