Raid paid assets, but should not have

Raid paid assets, but should not have.

I signed out of game immediately after clearing my tower (collect button). When I returned to the game, pop up notified me of two enemy revenge raids; both were by same player 32 minutes prior to my return.

That was followed by several in game ads then the Dunes pop up. Then the “you’ve been attacked” thing comes back saying I lost to a raider “now” and I lost assets.

I never left the home page/screen. No forum, just cleared farm and forge, and checked alliance page for messages.

Should that taod have been paid? The previous attack winner got nothing from me.

It could happen if the attack happened right before you logged on, then the attacker could attack you because you were offline and when he won, he would gain raid loot according to the actual amount in your watch tower, which, unfortunately, was refreshed by your logging on.

I myself have experienced the same a couple of times, now I make it top priority to collect watch tower after a long absence.

The mechanism should not allow it.

You can be raided while online if your raid cups are above a certain amount, I believe above 2700. Is it possible that this was the case, or did I misunderstand the situation?

If someone started their raid before you logged on, they’ve got to be allowed to finish it, and if they do win get given the rewards stipulated. It would be a bigger bug if they got kicked out of the raid, or not given any rewards for winning. It’s just unfortunate timing for you, but not much that can be done unfortunately.

if your raid cups are above a certain amount, I believe above 2700.

No. You can’t attack someone online.
You can only make revenges (or get revenged) and only if your opponent (or you) are global top 100.

It’s pretty easy to verify that. If you’re at the top in the leader board and raided already most of the people offline, you will get only the same few players available with similar cups that are offline, but no matter how often you reroll you will never get those with similar cups who are online. But you can get revenged (if you are in the top 100) or make revenges on other players in the top 100 when they attacked you first. .

Any player winning a raid is guaranteed to receive assets. The point is where did the assets come from.

My tower was emptied when I exited gameplay; therefor, the mechanism should have rewarded the winner with minimum assets from mechanism.

I should not have paid anything.

I don’t understand your complaint. Your watchtower produces ressources even you are offline. The attacker saw the price he could get before attacking you while you were offline. You just happened to log in in the middle of the battle. So? What’s the problem? He won and got the reward he was promised. Nothing wrong here.

Anyway, definitely not a bug.

If my waychtower was cleaned, there are no assets OF MINE.

I think you’re making noise over nothing. There’s nothing wrong, no bug, no error, just the way the game works. It won’t change, wether you understand it or not. By the content of this post, I presume you’re kind of new at this, a couple of months ingame, most likely… But give it time, you’ll get the hang of it…

I don’t think you understand completely how Raid rewards work.

Say you are offline and raiding you would give 10k ham.
Now you are very high with cups so a lot of people will raid you at the same time.

They all attack you when it shows 10k ham. They start fighting you and you come back online go to the watch tower and grab everything that’s there.

Now when those battling you win they still get 10k ham, but not from you. Because you already took out everything there was, it still writes - 10k in your tower but they get it from somewhere else.

Same if more attack you at the same time.
I left the game with high cups and cleared watch tower. I got successfully raided 17 times each one gaining 4k ham (because they attacked at the same time) that’s around 68k ham lost, which is more than the watchtower is able to produce in 1h. So the tower can only produce around 14k ham in an hour and I lost nearly 70k. That doesn’t mean I was with negative ham balance. 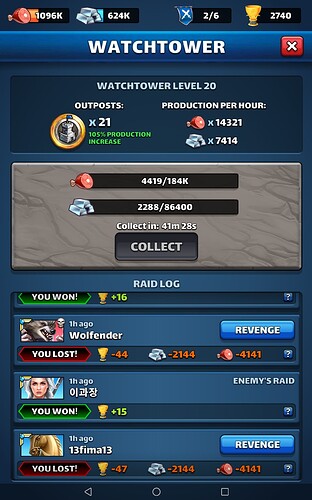 It’s just that whoever raids will get exactly what is promised when they start the raid. If someone else raids or clears the tower they still get it. But neither does the tower owner loose more than they should (or if they clear the tower they loose nothing at all) nor does the raider get less than promised even if something for them unlucky happens.

To be honest I have no idea what’s the problem with this system or why anyone would ever complain about that. This is probably the best for everyone giving the attacker and defender the best possible outcome without any negative effects for anyone

Thank you for the detailed explanation, I didn’t have the courage to write all of this.

I needed a laugh
Thx