Probably everyone was so underwhelmed by the innate resistance that they didn’t bother.

Everyone is waiting for someone else to pull

Well I’ll gladly take this hero and give him a starting spot. Painful to replace Athena, but having those heals seem like they could be a game-changer.

Question for those who played with him in beta - I assume attack buffs from allies (such as BK or BT) have no effect on him either?

…but also got touched by the Night King unfortunately.

And yeah, innate ability is terribly chosen - whoever came out with that idea better explain themselves in the performance discussions lol.

Question for those who played with him in beta - I assume attack buffs from allies (such as BK or BT) have no effect on him either?

Would think that means buffs are fine

as I wrote in the other thread…

I think Raffaele (in Italian) is a very good healer, slow just like Vivica and nobody ever said she was useless or she was needing a buff… even his class is right for his purpose but I disliked just his special innate ability ( Immune to attack decrease ) since it will never change a thing in any raid, titan, war, defence, etc… it’s just a nonsense: please find an innate ability which could have a reason to be .

Im not very fond of this HOTM.
i mean , his healing is really big , he has well rounded defensive stats.
However being slow is a big drawback nowadays, plus the fact he is expensive to max(need scopes) so the competition with others 5* blue is important , and he may not be the top blue priority of anyone.

His other competitor is costumed Kiril. A cheaper and faster healer in blue .

Anyways i wont complain if i pull raffaele

His other competitor is costumed Kiril. A cheaper and faster healer in blue .

Kiril is cheaper and faster, yes. But not easier to pull.

However being slow is a big drawback nowadays

And it is a main reason why people dislike him. But in new DoT meta he can be good off-color support, because can save near-dead team (and dispel in defence rarer than in offence).

I rate him just comparable with Vivica (without costume).

For me Vivica is worth maxing, and Raphaelle too.
But yes, Ariel is clearly better.

Since I don’t have Ariel, I’ll settle for getting ol’ Raff, seems like a solid addition to an all-ice team that I might try on war defence

wonder if he’d have good synergy with costume-vivicia, or will two ‘slow’ healers on a team be a bad idea?

This guy can do over 7,000 points of healing between the initial ‘return to half’ and subsequent DoT. Really surprised not more love for him, even at slow and with pure tank stats.

Also that innate ability - not great, not bad. Useless more than anything.

@Dan7 his healing factor is highest in the game now.

But he is slow, and it is a main reason why people dislike him.

But I will not complain if I will got him in Atlantis, Teltoc, Valhalla or other event.

For me Vivica is worth maxing, and Raphaelle too.
But yes, Ariel is clearly better.

Yes , i mean , the only real “drawback” of this hotm is the slow speed . But if you have the scopes and not other better option to spent the scopes on so this hotm addition will be very welcomed
In my case im only 1 scope from maxing c.richard.

I think that between this hotm and c.richard i will lean towards richard purely because i need his versatility and im a little covered with kiril in terms of healing .

For example, I have many great fast blues waiting for scopes (Vela, C.Magni, Lepus, Fenrir), but Rafaelle can play well in slow blue team with Isarnia and other slow blue AoE.

I will choose him over vanilla 5*, for example (but not over costumed 5*).

Even if I got from any coin summon, he will not get scope at all.

Once again, in defense you don’t have a good advantage of it at all.

People can just try to avoid that condition by bringing enemy down directly or just hurt till 40% up then it’s useless heal and wait their Dispel hero when Raffaele charge.

So it’s only 10% healing and Regen one turn. That’s it.
You can imagine yourself how many Dispel 5 stars heroo already in E&P especially Purple and Green. (Sorry don’t count Red 5 cause it’s none / sad story but true)

I prefer to bring a Direct Heal like Vivica or Ariel.

Ariel is way way better than Raffaele on defensive and offensive.

And in Offense, You are gambling with your Hero If you want them to get below 50% or not to get back to 50% and risking your ally to get sniped and dead.
*Unless good thing you have fully Emblem Fighter and he revived after dead. Then it’s a good deal for Raffaele. Other than that. He is not good at all

This Mechanic 50% things is not really interesting for me at all. Maybe also for others.

And agreed on other healers - but they all seem to be cleric. Mother North has my cleric emblems and doesn’t like to share! At least with monk can get two healers up to speed. 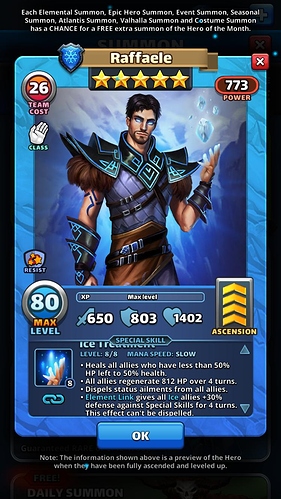 His resist for a support-hero is very weird …

Why do you don’t use the main thread for him?

New HOTM RELEASED for JUNE 2020: Raffaele This thread is for discussing strategy related to Raffaele, as well as your thoughts on him. If you’d like to discuss whether Raffaele is appropriately balanced, or possibly in need of a buff or nerf, please see this thread instead: