If we all are getting our own events, well I want one where I can compete against players that spend less than $20 a month.

It’s all been said before, but you simply will not get what you are hoping for.

The rare challenge is already a place for you to try to COMPLETE. To get in the top 10 doesn’t even get you non-farmable loot. They won’t make an easier challenge where you are limited to beginners that will give you better loot than top 10, just won’t happen. It’s a grind, with no freebies for beginners like what it seems you are asking for. What’s the point of a beginner challenger with no loot?

If I start a new account I will work at completing Rare, and then Epic and the Legend, but even after 1.5 years I have no expectation that I can hit top 100 in any of these and don’t bother. I don’t expect to be competitive without spending money.

I don’t let it bother me, and I worked hard to get the 5 non-farmable 3+ mats available every month like 99.99% of players, the math is actually worse than that.

Again, COMPLETION is our goal, COMPETITIVE is out of reach without serious money and experience. You are hung up on getting to WIN and that is not something most of us will ever see.

To get in the top 10 doesn’t even get you non-farmable loot.

The Top 10 of Rare Challenge Events get 2x 3* non-farmable and 1x 4* non-farmable; plus an Avatar, EHT, ETT, flasks, and a Trainer Hero that are all technically non-farmable too.

The Top 100 only gets the EHT, ETT, and WE flask; and of those, only the EHT isn’t already granted to Top 3000, so it’s not much of a prize for getting to that much higher tier.

I will be celebrating my 1 year of playing in about a week. I won’t post my roster here, as I will be doing that at that time, but I would like to chime in on the idea that you cannot “catch” top tier or older players.

In less than 1 year, I have more than a full rainbow max 5* and plenty of max 4* to fill my roster. I can compete with players of any level. I have raided into the top 25 on several occasions without use of flasks. Over time, you definitely can catch up.

The only place where top tier and newer players are in direct competition is the challenge events. To complain that as a X month old player you should be automatically able to compete with the top tier is selfish and disrespectful to those players who pushed through the same barriers you are facing now, spent the time to make their rosters better, and achieved success over time.

Edit : to address quests in general, all players have been newbies before. We all had to bide our time and complete what we could as we gained strength. Slowly, we can complete more and more until finally we can get it all done. That is the price you pay to gain the better rewards. Higher Titans yield better loot. New players facing 1*, 2*, and 3* Titans should not expect loot as good as 10* Titans. That is the progression of the game. This is not a game full of participation trophies. This is a game of taking the time to grow your power to achieve better success.

Rant over. Stay tuned for my E&P birthday post to come in a few days.

I forget which event, but there is one where the top 100 rare gets two hidden blades

Guess they ran out of non-farmables.

The rewards for Top 100 and Top 10 are better there all around: 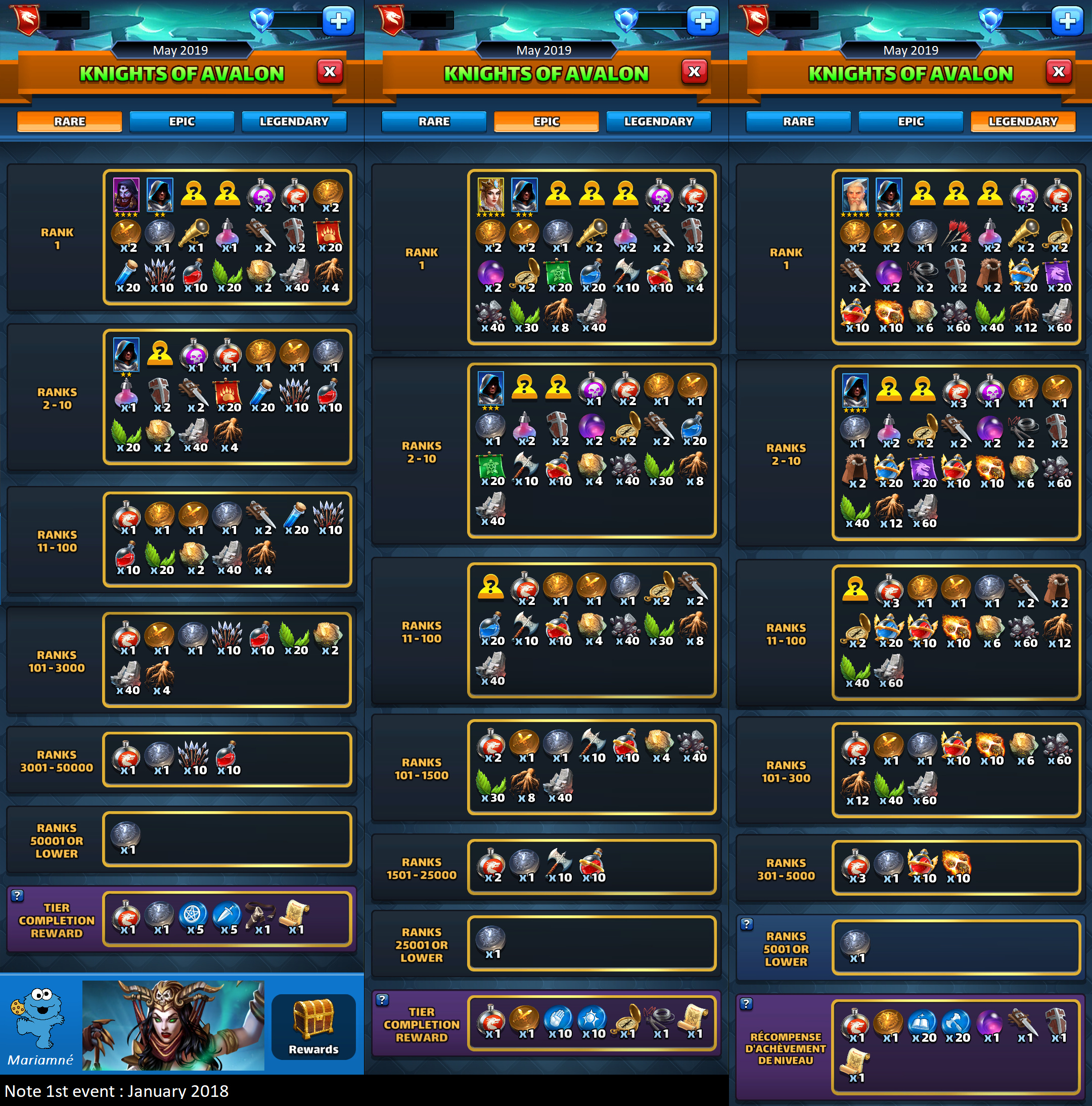 You are correct, I should have said Only the top 10 get non-farmables, and I see that isn’t always the case as you also show Knights of Avalon gives a blade in top 100.

Still no incentive or me to pursue a “win”.

Thing is, though, I find the loot and xp quite good for just completing the stages, and even better if you can get to the end of the difficulty. That’s the benefit for newer, non-rich players. Ironically, I suspect the competitive bit is to give longer standing players an incentive to join in. I skim over the top few rows of rewards for being World Best 3* because that doesn’t and never will apply to me. I got somewhere in the 100,000s. Maybe this time next year I’ll get somewhere in the 50,000s and feel I’ve made great progress. The bottom-line goodies are what I’m playing and hoping for. The top-line stuff, let the youngsters, the skilled and the whales battle it out and I hope they have some fun in the process. I’ve got Stuff out of it, and that’ll do for now. (Except the Legendary completion bonus - I loused up, finished the last stage about a minute after the event ended

You can’t win all the time. If you want to keep anyone who’s better than you out of the game, have you even won at all?

The bottom-line goodies are what I’m playing and hoping for. The top-line stuff, let the youngsters, the skilled and the whales battle it out and I hope they have some fun in the process. I’ve got Stuff out of it, and that’ll do for now.

A kindred spirit! Give me my token, emblems, and (for epic and legendary) three star mats, and I’m a happy dude. Although I did manage a top 50,000 finish on Wonderland rare this weekend, quite by accident. First time placing into a tier other than the lowest. Probably because I’m the only dork with Hawkmoon, Bane, and Valen at +20 due to a dearth of better options in those classes. (Not the case after I maxed Poseidon this morning, though!)

(Except the Legendary completion bonus - I loused up, finished the last stage about a minute after the event ended

I did this last Wonderland, back in February. First time I had finished legendary, and it didn’t count. I was most upset. Hope your misery is eased by my company.

Thank you, yes, it is

The season one map IS the first event for new players. Until they can complete season one, or close to it, they’re not ready for their next event.

“The first event is too eventy, I want a newer less eventy event I can win faster” shouldn’t be a thing.

Why not? Don’t you want new players to participate in events?

Listen to yourself talking. You are saying you should be able to to compete in everything because you have played longer and you deserve to and new players dont because they havent played as long.

If you read my post CAREFULLY and my repeated posts, i keep saying the same thing, but players like yourself and others keep going back to the fact that you played longer so thats it.

For the last time in this post Im going to say it again, THERE SHOULD BE QUESTS FOR OLD PLAYERS AND QUESTS FOR NEW PLAYERS for a chance to win things also.

You veterans can have your quests to play against each other but there should be a couple for newbies that havent been playing long where Veterans cant enter that have stacked teams.

I dont see what’s so hard about understanding this what im trying to say. Im not trying to take quests away from you Veterans, just add a couple for new players to be able to compete and get some decent rewards between them only where Veterans cannot enter.

Not what I said at all.

It takes time. This whole game takes time. It is designed that way. If you want better loot, grow your roster. Kill stronger titans. Fill chests. Compete in wars. Compete in raid tournaments.
In time, you will find that the gap between you and veteran players gets smaller and smaller.

If I understand your request, you want a specific competition just for new players. Who would decide who could compete? Will it be based on highest TP or time in game?

Anyone can enter any event, and if you can complete the stage everyone gets the same loot. How fast you complete the stage can give you great bonus loot. Higher level players tend to win these rewards - which is fair as you need skill and strategy to achieve at this level.

Where do you see a quest for new players fitting in? I can’t imagine the loot for such a competition would be very high as newer players wouldn’t need the 4* AM usually on offer for quests?

Season 1 map is the first challenge event for new players. It exists already. It’s not periodic or cyclical because new players are added every day.

It also serves as an intro to hero usage and resource acquisition, and every level provides prizes.

Stop ignoring what the game already gives new players to pretend it hasn’t given new players anything.

Hi Sarah, maybe they could add one with a TP score under 2500 or even 2000, because ive been playing for just over 1 month and my top team is lucky to get to 2500 and most Quests require you to be at least 3000 to complete them from what ive seen. Unless its just a general get some food or iron or a couple of gems.

I dont see the harm in adding Quests with these lower scores though as well as keeping the other ones for the big players?

So if they added one, how does it effect you in anyway ?

They advise it, they don’t require it.

Too bad many people in the forums don’t see change as a good thing and they just argue about the little things.

The issue is, rather, that the devs have only so many days in the week which have to be split up amongst all the things they’re working on. New content for lower level players means something that is of interest to the long-term players gets delayed.

I would not object at all to something like a “level X max” event for the lowbies (although, just wait for the complaints about how the big spenders run away with it). But if you ask me how much delay of Season 3 I think would be worthwhile in order to make that happen? Well…