Someone has wondered … rather!
Someone has deduced why the colors
Red green Blue damage each other and then apart are the yellows and purples alone ???

Why not all in a row ???
Ie red green yellow purple blue in a single circle ???

I see your answers, I may not have expressed myself well … because they are separated yellow and purple from the remaining three.
And because the other three are together.?
And not all together.
If it is a simple matter that they harm each other and not each other, why differentiate them into two sides. 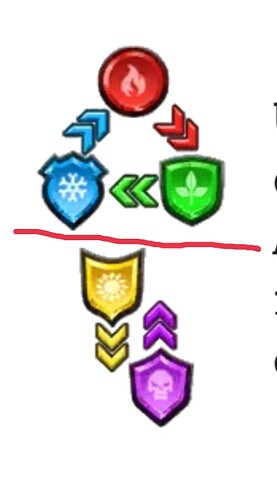 Why not just a circle of 5

It goes back to elements light vs Dark for yellow/purple

Fire vs Nature for Red vs Green

Water vs Fire for Blue vs Red

As @Kilted said, the key is in the “official” names of the colours.

Then in really old stuff, there’s the theme of good vs. evil… Or in this case holy vs. darkness.

When I first started playing, I used the image of tree roots cracking open ice covered rocks on a mountain peak

(teasing)
Now that I have a house mortgage, it reminds me of colored sand we put down on the icy sidewalks in winter
(end teasing)

I think the underlying reason why they designed it like that is to sacrifice elegance (of a ring of 5) for simplicity.
It would be much harder to remember the ring of five than it is to remember 3. And even that many people already have trouble with

Even if you just used colours and forgot about the names, due to other games using the colours this way it would still be unintuitive

, and why is green put together with 2 primary colors and not yellow

this will make my head explode!!

try remembering/associating with trios where Green is included with Red and Blue, like Alvin and the Chipmunks, the Powerpuff Girls, or Donald Duck’s 3 nephews

is one of them adopted?

The implementation the way it is was of course simply SG’s design decision. We as players can only guess at the reasoning and thought process behind it, but I think the explanations of holy vs dark and fire vs ice etc. make complete sense.

Secondly I think this arrangement adds a strategic element different from what a simple “circle of 5” would be. You can’t attack yellow with purple without also exposing your own purple to the strength of the enemy yellow against you for example, but the dynamic is different for red/blue/green. Personally I like this extra strategic layer the way it is.

A reason not mentioned yet, aside from the traditional elements aspect, is that this way means each colour has 1 colour it is weak against, 1 colour it is strong against, and 3 it is neutral against.

This then keeps balance for the puzzle aspect.

So would a pure ring-of-five, yes?

If it were JRPG element rules, red and blue would be weak/ strong against each other. Yellow would be lightning and weak to blue. Red would also be strong against green. It doesn’t stray from holy/ dark being weak to each other though.
It kinda always bugged me that there isn’t an electric element in this game.

“Dark” enemies is some trad games are weak to fire, so I can see it making sense. Also there’s games where fire/ ice are weak/ strong against eachother.