Maybe someone can help me understand this issue.
During war this guy managed to kill our top players (3500, 3400 and 2900 TP respectively) scoring over 300 points. I look at his raid defense team and got almost 3900 power, but his war defense team has 5 level 1 heroes and 5 level 1 troops, 800 TP.
We killed him and gave us 38 points. If he had used his main defense team we should have been rewarded with more than 100 points.
Now… How is that fair? How is that even possible? Sure someone will say ‘strategy’ but I won’t buy that. The defense team should be both for raids and wars.
Got screenshots if needed.

Got screenshots if needed.

No need for the screen shots. The points for the entire team are divided amongst all of the players on that team. It does not matter what defense each person puts up. The total points of the team are the same each time. If you kill all members of the opposition, then you get all of those points. About all he did by putting up that defense is give you an easy kill and make one of his Alliance mates worth more points.

No way should raid defense and war defense be forced to be the same. Terrible idea. We have team strategies that makes everyone’s team different.

He made his defense worth less, but the others in his alliance worth more. Add up the entire alliance at the beginning and they’re worth right about 1500 points. No matter if they have all 5 star defenses or 1 star defenses.

Seems like an awesome target for allies with less depth!! I’d love to hit all 1s for 40 points with my 5th and 6rh attack. Some new players can take him out, where as they might get 2 or 3 total on each attack cause they get smoked. Ignore his points he would have scored anyway, and take his gift

So he made other teammates to have more points? And gave us an easy target… Didn’t see that way the first time.
Ok thank you for clarifying this matter, I’m going to shut up now and kill him again.

Digged this topic for a short question.

How the points per team are calculated and why do we get more points from the weaker team? 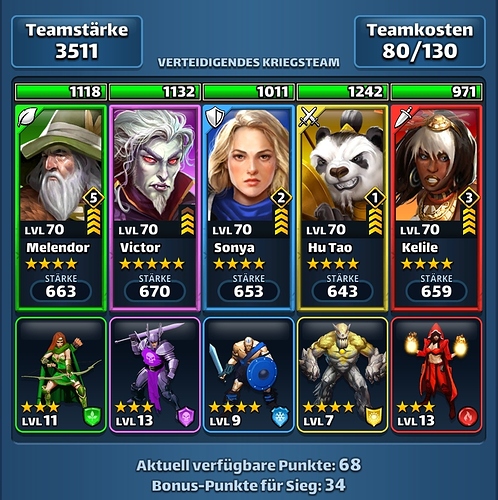 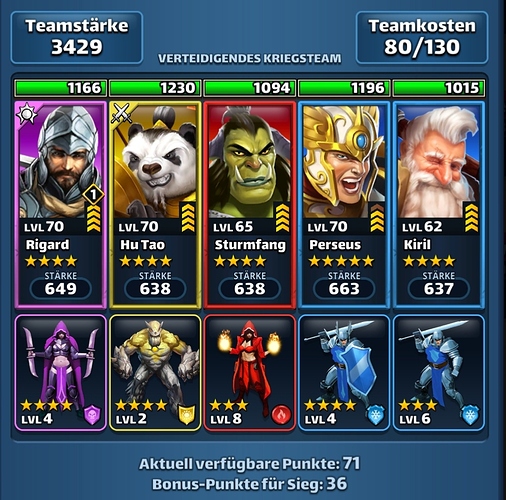 They’re purely off of team health. The points are:

Thx for clearing this.

Any time, my friend.

They’re purely off of team health. The points are:

For the sake of clarity, are you saying:

@Garanwyn isn’t around much anymore, but I will try to answer.

My understanding of it would be:

Edit: though what you said may work for a partial. I wasn’t thinking it all the way through

Given points are directly proportional to health, the partial health should also correlate with the points as well. But who would want to make that calculation during the war?